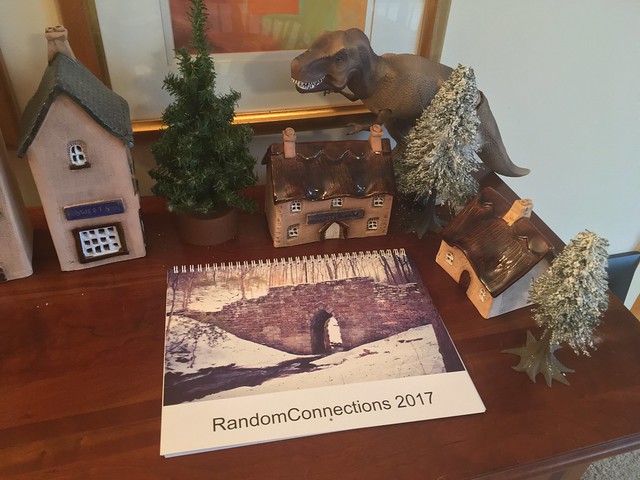 It’s time once again for the RandomConnections Calendar. This is the tenth year that I’ve been creating calendars for friends and family using photos I’ve taken from the previous year (and beyond.) As usual, I like to recap the photos included on the calendar and give a bit of the background behind each one.

I say this is the tenth year, but I’m not exactly sure. The earliest blog post I found was for the 2008 calendar, in which I state, “For the past couple of years I have used the Qoop publishing company to create a calendar from my Flickr photographs,” which implies that I might have been doing this since 2006. However, I can only find a Flickr album from 2007, and those look like the first images I included on a calendar. Yeah, I’ve kept a sample from each year, but I was just too lazy to dig those out. If I had been paying attention I should have done a Tenth Anniversary edition. However, I wasn’t, so we have the usual random collection, which, I guess, is appropriate given the title of this blog.

At our family Christmas gathering I was asked, “How do you select the photos for the calendar?” The process is fairly straightforward. I’ve created a Flickr album called Calendar Potentials. The photos are what I consider the best, and have to be in landscape format. While choosing photos for a specific calendar I try to keep it to the year just recently passed, but I may dip back into the archives if I see one hasn’t been used that I like. I make some passing attempt to match the season of the month with the season of the photo, but it doesn’t always work out. Once a photo is selected, it’s moved to a new album for that year and removed from the potentials list. I don’t like to use a photo more than once.

So, without further ado, here are the photos included in the RandomConnections 2017 Calendar… 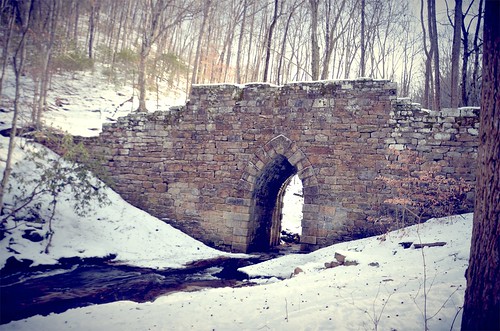 The cover shot is from January of last year. We had a rare snowfall, and decided to get out and do some exploring. I wound up at the Poinsett Bridge Heritage Preserve, where this photo was taken. The roads weren’t so bad in town, but by the time I got up here they were a bit treacherous. Even so, this made for an interesting view of the old bridge. 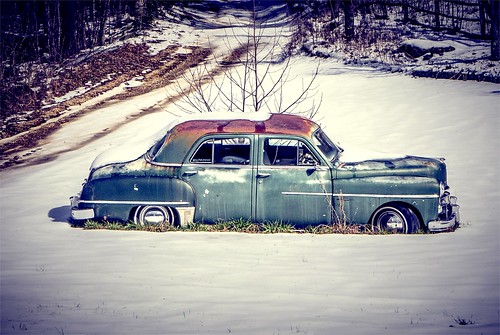 January’s shot is from the same trip as the cover photo. On US 25 headed north there is a family logging operation. In addition to old pieces of logging equipment, the entrance is decorated with this old car.

I actually processed several versions of this photo with different Lightroom settings. 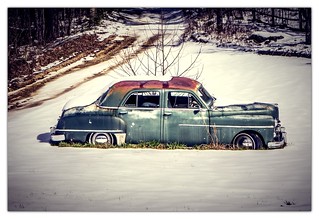 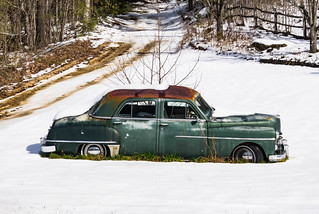 I decided I like the HDR sharpness and vignetting of the one I selected. 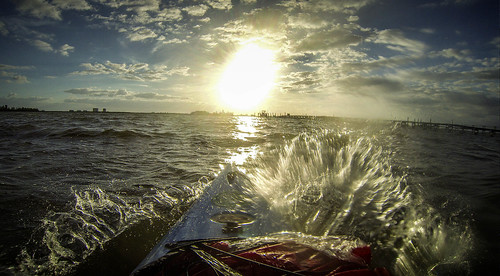 Sometimes I get suggestions about photos for the calendar. When my sister, Glynda, saw this photo she insisted that it be included for this year. This photo was actually taken in March of 2016. This past year we made many trips to Florida to help out with Laura’s mom, who has Alzheimer’s. My pattern is to get up before sunrise and kayak for a couple of hours, leaving me free to help the rest of the day.

I’ve left a tandem kayak at her sister, Amy’s house, but occasionally I like to bring down a different boat. In this case I’d brought my Old Town Dirigo. It was particularly choppy on this morning, and water was splashing over the bow. The red in the photo is a sail that I can use when needed. This was taken with my GoPro set on automatic so that I’d have my hands free to paddle. 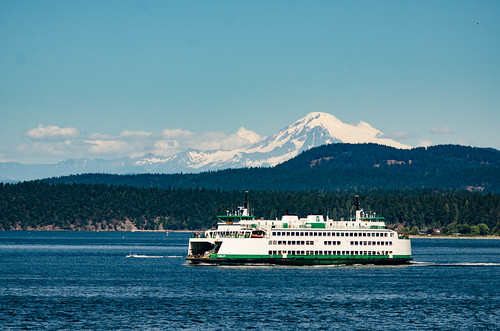 March’s photo is another one of those that doesn’t quite match the season. While it was taken in 2016, this was from a July trip out to Washington State. This is basically the quintessential Washington scene – a ferry with a volcano in the background.

We took a ferry trip from Anacortes through the San Juan Islands to Friday Harbor. Along the way we passed another ferry going the other direction. It lined up for the perfect shot. 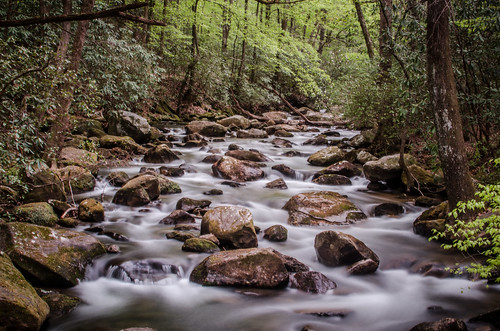 I dug back into the archives for April’s photo. This one was taken in 2014, and it’s a view of the Middle Saluda River at Jones Gap State Park. It was Earth Day, and I was out and about taking long exposure photographs. I hit several venues with flowing water, and eventually wound up at Jones Gap. I used a neutral density filter with a long exposure to create the silky effect with the water. 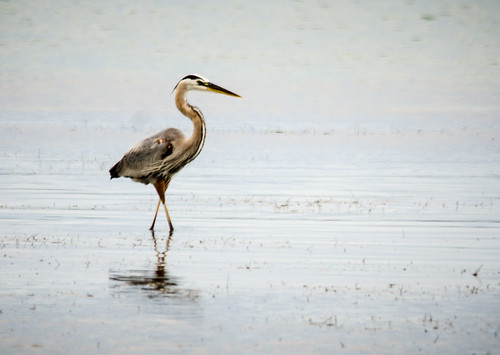 Another 2014 photo, this is a shot of a great blue heron. The photo was taken at the Fort Pierce Inlet in May of that year. 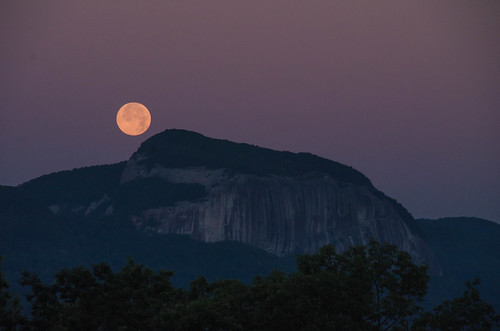 June of this year saw an unusual confluence. The full moon occurred on the same day as the summer solstice. I got up at 4:00 am and drove up to Bald Rock, hoping to catch the solstice sunrise. As it turns out, the better views were to the west, where the moon was setting over Table Rock. 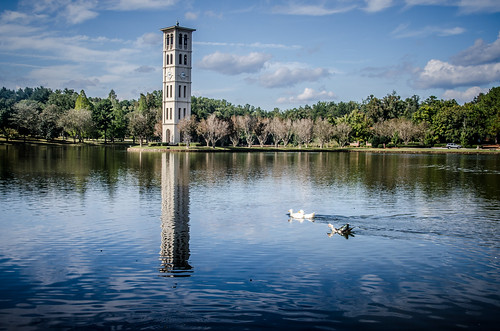 Looks like I’ve had to dip into the archives quite a bit for 2017. This shot from 2013 is one I took of the Furman Bell Tower on Furman University’s campus. 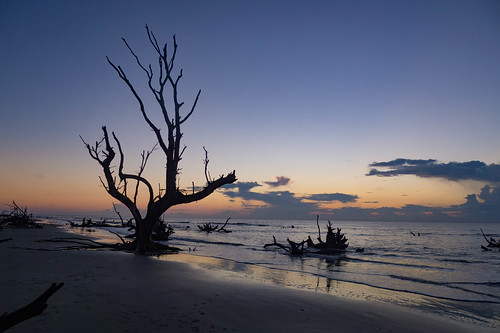 In September of this past year the Upstate Minis took a trip to Charleston. The next day we got up before sunrise and took a ferry over to Bull Island so that we could photograph the rising sun over the “boneyard”, a stretch of dead trees along the beach.

I actually got better photos, but I thought this one fit the calendar better. 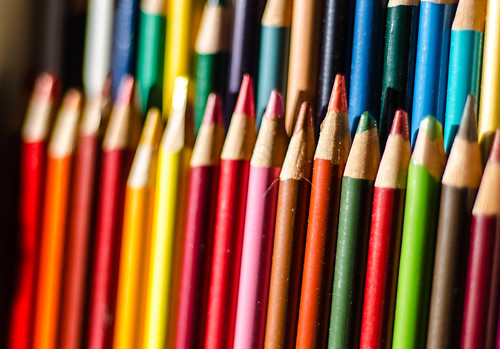 OK, so after ten years I do run out of ideas. I’m really not sure why I took this one, except that I like the colors. Specifically, this is a set of Berol Prismacolor pencils I’ve had since college. I guess I could have photoshopped out the cat hair clinging to that brown pencil. 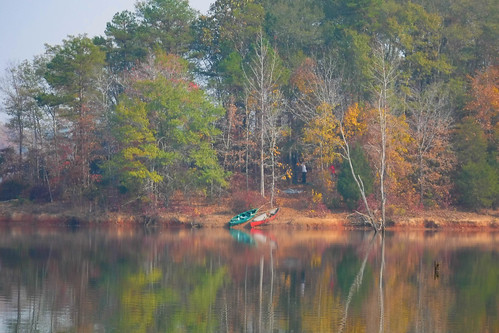 November of this past year saw terrible wildfires across the Blue Ridge Mountains. I headed south for a paddling trip, hoping to escape the smoke. I decided to explore Lake Russell. What I didn’t know was that the smoke was funneling down the Savannah River Valley, so the lake was very smoky. It seemed as though I was paddling through Mordor.

There was one bright bit of color, though. In addition to the remaining fall colors, a couple of canoes had pulled up to an island in the lake. 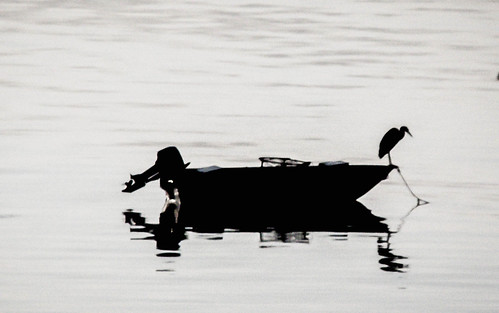 This is another shot from our Washington State trip in July of this year. There is a nice beach access on the northwest end of Samish Island. When I’m there I usually do a morning walk, and often wind up at this point. On this walk I found a heron looking for fish on a boat anchored out in Samish Bay. 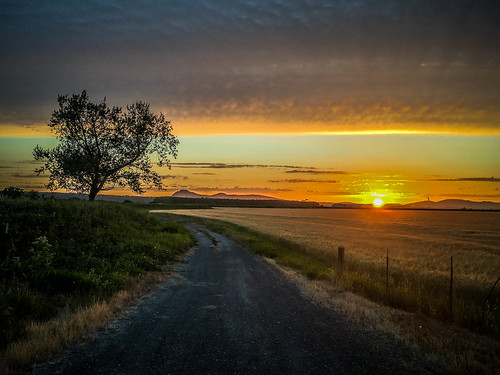 Another from Washington, the sunsets were truly amazing. I had been out kayaking on the Swinomish Channel and was on my way back to the house. There was another spectacular sunset and I had to pull over to take a couple of photos. This was just south of the community of Bayview, overlooking Fidalgo Bay.

So, that’s 2017. The calendars are still available online, if you would like to purchase one. Here’s a link. I clear enough from each calendar to buy a candy bar, so I’m not getting rich off of these. 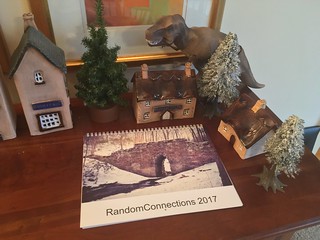