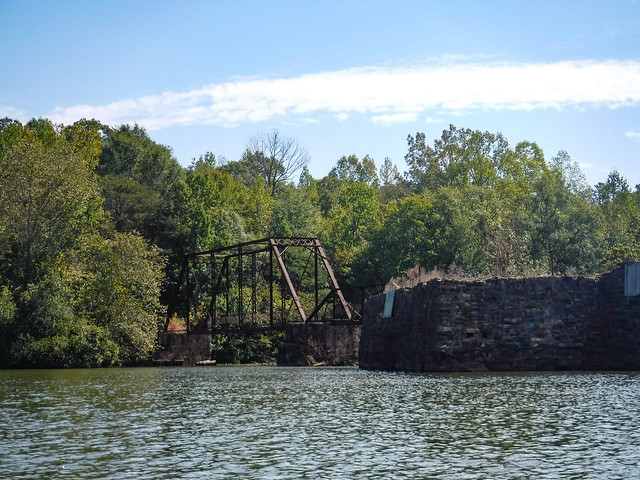 For many years I drove over the bridge over the South Tyger River at Berry Shoals, looking longingly at the old steel trestle bridge downstream and the twin lakes of Berry Shoals Pond and Silver Lake. I wanted to explore the area. However, I was always in route to one of my schools or on some other school district business, so I never got a chance to explore…until now. Sadly, my explorations were cut short, all for want of a hat.

Some weeks back I had discovered the new ADA accessible landing on Berry Shoals Pond. This landing, dubbed Tygerberry Landing, is part of a project by the Tyger River Foundation in association with the SJWD Water District to provide access to sections of the various branches of the Tyger River.

Tygerberry Landing, along with another ADA landing on Lake Cooley, opened last May and is part of a larger Blueways project that will eventually include five such access points, as seen in this map from the Spartanburg Herald.

I tossed my Dagger kayak in the back of the truck and planned to do a minimalist paddle on the small pond. I only had a small camera and I wouldn’t have even brought the GPS if I hadn’t broken the band on my Garmin wrist thingy. Unfortunately, I was a bit too minimalist. I forgot a hat. For me that’s unthinkable, especially on a hot sunny day. (NOTE: I have since made sure that I have at least two spare ball caps tucked away in each of our vehicles.)

I found a towel behind the seat of the truck and attempted to keep it in place with a bungie cord. It wasn’t ideal, but I’d be able to spend a little bit of time out on the water. I got ready to launch.

I’m sure the Tyger Foundation folks had to use the property that was available to them, but this ramp isn’t in an ideal location. The water levels were quite low and a log was blocking the end of the ramp. It made maneuvering a bit difficult, but not impossible. There were other slight obstructions that I was able to bump over as I made my way out of the cove. The log needs to be removed, but I’m hoping things improve when we get some more rain. What water I found was brown and yucky.

This area of the pond is choked with vegetation and silt. I followed a route I hoped would take me to where the South Tyger enters the pond. I got to a point and found I could go no further.

I retraced my route. Along the Tygerberry peninsula they had added benches for fisherman. I rounded the peninsula and headed out to the main part of the pond.

There are some nice houses on the north shore of the lake and I could see one under construction. However, the tendrils of silt of extended into the main body of the pond. It didn’t look like any of these houses would have clear access to the lake. A small wading bird took advantage of the shallow water.

On the south side of the lake along Berry Shoals Road there were more modest dwellings, but these had better lake access without the silt. Right at the bridge sits Brown’s Bait and Tackle, which has a pay boat ramp. Previously this was the only public access to the pond, and owners Rhett and Linda Brown expressed concern that the new Tygerberry access would hurt their business. Probably so.

All this was well and good, but my interest was on the other side of the Berry Shoals Bridge.

Here, visible from the main road, is an old steel trestle bridge and the dam for the pond.

The structures were severely back-lit, so getting a decent shot with my little point-and-shoot was a problem. Water was rushing over the dam to the left. I approached cautiously to the right.

Keeping a safe distance from the dam I crossed back to the left and found a place to land. From here I was able to get a better view of the bridge, dam, and the shoals below.

For some reason I’d thought that this was a railroad bridge. From this angle I could see that the bridge had a sharp angle I’d somehow missed. That seemed odd for a railroad.

On this side of the bridge there was a pool walled off from the rest of the river. The remains of floodgates obviously controlled how much water was diverted into the pool. Beyond that were the namesake shoals. If there were any doubts as to the danger posed by the dam, the remains of an ill-fated motor boat down below erased them.

I didn’t trust the masonry of the old dam, so I didn’t venture out onto it. I could see the remains of an old road bed heading off into the woods and what I thought at the time were old rails, reinforcing my idea that this had been a railroad bridge.

While I wasn’t able to get good shots of the bridge, others have. The South Carolina Picture Project has several good images. Back when Slobot was doing his explorations of Spartanburg County he ventured down below the dam and onto the shoals. The images below are some from other Flickr photographers. Clicking on the photos will take you to the photographers’ Flickr pages.

I especially love this photo of the bridge in snow by photographer Philip Henderson.

Photographer Michael Howard did a black and white set of photos of the bridge with an old Konica Autoreflex camera. That album is posted below:

There are also several videos of Berry Pond. The best I’ve found is a drone view of the bridge and dam by YouTube user Grandpa Jake.

I headed back to the boat and explored the little cove just east of the dam. I could see the roadbed coming from the dam and a house in the corner. There were also several neglected duck boxes.

As I approached the launch I ran into a bit of trouble. The more obvious route was the wrong one and I hit a dead end. The narrower, more choked route was the right one. I should have remembered. Avoiding the log was even trickier on the approach than on launch, but I managed. I was wishing I had my grappling hook and rope to remove the obstruction.

I had only paddled 1.5 miles, mainly because I didn’t have my hat. When I looked at the GPS track I saw that I was nowhere near the entrance to the South Tyger route upstream. It was around one of the silted spits where I had seen the birds. Fellow paddler Larry Easler said that with better water levels they have been able to get all the way to I-85. I’ll have to try that when the water rises, now that I know the correct route.

I wanted to know more about the old dam and bridge. The waters rushing over the shoals have long been a source of power for various mills. Robert Mills’s 1825 map of Spartanburgh District shows that Muckelwrath’s Mill and Nesbit’s [sic] Forge and Mill were in the area. I tried to create a Google Earth overlay with the Mills map.

If I lined up the map correctly, Muckelwrath looks to be above the existing Berry Shoals Bridge and would now be under the current Berry Shoals Pond. Nesbit(t) looks like it was below the shoals.

Other early maps show the name “Berry Shoals” and indicate that a road crossed the South Tyger above the shoals. These maps are from the Spartanburg Library collection, but they are confusing. The first is from the late 1800s, the second is supposedly from 1910 and the third from 1927. None of the maps show the pond and dam, which was built in 1900.

I soon learned that this was NOT a railroad bridge, but a regular road bridge across the pond. The earliest map that I could find that shows the pond itself is a 1938 USGS topo map. It clearly shows that this was a road bridge and not a railroad. That saved me the step of searching the Abandoned Rails website.

Why “Berry” Shoals? I found a few names in newspaper archives that shed a little light, but I’ve only been able to speculate with associations. First up was this article announcing the sale of “A. L. Berry’s Famous Farm” in a December 1916 edition of the Greenville News.

Albert Leland Berry lived from 1879 from 1954. He is buried in the Nazareth Presbyterian Church graveyard. In addition to farming, A. L. Berry was also a land speculator. The Berry-Fortune company bought large plots of land around Lake Lanier near Tryon, NC.

According to Find-a-Grave, A. L. Berry’s father was Commadore [sic] Perry Berry. Apparently his grandparents had a sense of humor, giving their son the first name of “Commadore” to honor “Commodore Matthew Perry,” albeit with misspelling. More importantly, Find-a-Grave shows that C. P. Perry married the former Mary Ann Nesbitt, which ties the Nesbitt Forge and Mill from Mills 1825 map to the Berry family for which the shoals are named. The Nesbitts had a set of shoals named for them just below the confluence of the North and South Tyger Rivers. I have kayaked over Nesbitt Shoals several times, and even wiped out on them once.

That explains the names, but the geography of this area has had me confused, based on the history I’ve read. The dam was built in 1900 to power Tucapau Mill, but Tucapau was several miles away. The community of Startex was once known as Tucapau, and was the site of the textile mill. This dam was one of the first to build the power plant a remote distance from the mill and use transmission lines to get power to the plant.

Even the power plant is not right at the dam, but, rather, downstream and below the shoals. The 1938 USGS topo map shows the this configuration. Using 2012 imagery rather than the latest, I was able to see that the “pool” that I had found was actually a canal that supplied water to the power plant downstream.

The Tyger River Foundation has a very good image of the power plant. This is also one of the proposed future landings.

In the late 1950s there was a plan to restart this as a power generating station. However, that never came to be. The land is now owned by the SWJD Water District.

There’s still quite a bit more I’d love to explore in this area. Old Power Plant Road is posted and inaccessible from Berry Shoals Road. The next closest access point is a mile downstream at Reidville Road and it looks like it would be a difficult paddle back upstream. Still, I’d like to find a way to explore the old shoals and power station. We’ll see if the Tyger River Foundation can actually get an access point established at the station.

As for Tygerberry and Berry Shoals Pond, it wasn’t the most pleasant paddle, even if I’d had a hat. The area needs some major maintenance, the water quality is poor, and the pond itself is in bad shape with siltation. However, I wasn’t able to find the route upstream on the South Tyger, and that might change my assessment. The real draw, though, is not the pond itself, but the history and wildlife so abundant in the area. And that is enough to make me want to come back.