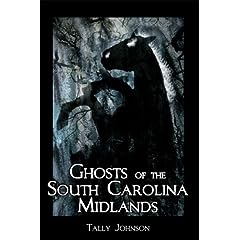 I added yet another book to my growing collection of South Carolina ghost lore. Tally Johnson has a book out entitled “Ghosts of the South Carolina Midlands.” While the subject itself was of interest to me, what sealed the deal as far as my purchasing the book was the dedication in the Acknowledgments section:

With three of my schools mentioned so prominently, how could I not buy the book? Johnson goes on to say that he first became interested in ghosts as a child when folklorist and southern ghost expert Nancy Roberts visited his fifth grade class at Lyman Elementary. I’ve learned from our current media specialists that Johnson has since made at least one visit to our district as a guest speaker.

In this newest book, as the name implies, Johnson explores ghost stories of the state’s Midlands. He takes a county-by-county approach, first providing a history and description of famous people from the county, then describing any hauntings. In some cases the history section far exceeds the list of hauntings. In some cases, it seems like it was a real stretch just to come up with a haunting for that county.

Unlike John Boyonoski, who says he is a skeptic with it comes to matters of the paranormal, Johnson is a believer. He claims to have personally experienced two “phantom hitchhikers.” Who knows. Johnson admits that phantom hitchhiker stories are as common as “crybaby bridges” and tend to follow a similar pattern. That he experienced TWO of these – one in the first book and one in this one – makes me roll my eyes a bit.

Johnson also differs from Boyonoski in his visits to various locations. Even though a skeptic, Boyonoski relied heavily on, and even participated in modern ghost investigations similar to those seen on Ghost Hunters. There was discussion of EVPs, EMFs, cold spots, and other jargon of the field. There was none of that in “Ghost of the South Carolina Midlands.” Johnson relied on his own experiences. If he didn’t see something, he says so.

I was a little disappointed in the brevity of some of these tales. Apart from the history, Johnson gives very little adornment to the stories. It can be a bit dry. Still, it’s an interesting collection, and adds to the list of haunts in the state of which I’m aware.