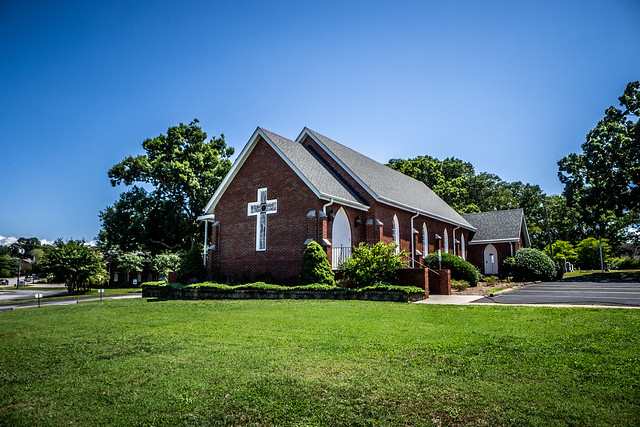 For many years I was music director at McCarter Presbyterian Church here in Greenville. McCarter is a small church located prominently at the intersection of Pelham Road and East North Street, a spot it has occupied for the past 123 years.

In all the time that I was there I never got around to taking a photo of the original exterior of the church. Or, rather, I took one, but lost it. I checked all of my data files and even pored over my old print photos to no avail. All I have is this low resolution photograph taken one Christmas, I think in 1993.

The church seated about 100 people with a squeeze. The original building had two rear projections with Sunday School rooms and exterior entrances. The overall design was English Gothic, with stepped buttresses and white capstones, and Gothic arched doors and windows. There was a simple narthex with double-arched Gothic doors and small side windows.

Much later an educational building was extended to one side of the building with a distinct high gabled portion. The plan was to build a new, larger sanctuary at that point, as seen in this sketch that hung on a hall wall in the building.

I always loved the simple Gothic details of the small chapel and the exposed wooden beams and excellent acoustics of the interior.

It seemed a unique little church in the bustle of a major neighborhood that somehow managed to survive.

But then I found out that it wasn’t unique.

Rev. Amos Workman was with us for just a few short months as an interim. We would have loved to have kept him as our permanent pastor, but the Presbytery had some kind of rule about interim ministers not being able to accept appointments to churches where they were current serving as interim. Instead, Amos was appointed to Florence Moore Presbyterian Church in Wellford for his first assignment.

That’s when I found out that McCarter had a twin. Florence Moore is nearly identical to McCarter.

This wasn’t the only identical sibling I’d find in the Upstate of South Carolina, and it started a search that has lasted almost twenty years. I have almost, but not quite, found the answers as to how these sibling churches came to be.

I eventually found three other churches built on the same plan as McCarter and one more that was close enough that, if not a twin, was at least a sibling. In the image below these are as follows: McCarter, Florence Moore Presbyterian in Wellford, Westminster Methodist in Westminster, Episcopal Church of the Good Shepherd in Greer, and Smyrna ARP in Smyrna.

In this collage the Smyrna image was flipped to line it up with the others. The Westminster Methodist image is from Google Street View, but the others are mine.

The best place to start digging was with my own former church since I knew more of its history.

McCarter was founded in 1896 in what was then a very rural part of Greenville County. The first permanent structure was a white wood frame building. In 1948 that building burned.

The fire and process of rebuilding sparked a controversy over who actually controlled McCarter. That resulted in a court case that went all the way to the South Carolina Supreme Court. However, that’s a story for another day. I was more interested in who built the current structure.

I found the answer in an August 1948 issue of the Greenville News. It was announced that the church planned to rebuild and that the new sanctuary would coast $18,000. The article went on to say that “Paul J. Oeland is both architect and contractor.”

The new Gothic sanctuary shown on the wall print never came to fruition. It would have been a lovely church right at a major intersection. However, churches like John Knox Presbyterian were built near by and syphoned off the congregation. McCarter struggled to survive, but in 2008 they added onto the front of the building and extended the sanctuary.

Now I had a name. It was time to see if the other churches I had identified were built by Paul J. Oeland.

About the same time that McCarter was rebuilding from its fire, Westminster Methodist was building a new sanctuary. Completion of the church was announced in the Greenville News on February 10, 1949, just a little over a year after McCarter’s fire.

The article was extensive, describing the dedication services and which ministers had spoken. Right in the middle of it was the name I was after, Paul J. Oeland.

So that was two down. It was time to check the others.

Episcopal Church of the Good Shepherd

I only recently learned about this twin to McCarter, and it’s more of a fraternal than identical twin. The overall shape and design are the same, but the building lacks the stepped buttresses of McCarter and Westminster.

Even so, this is a Paul J. Oeland church, but it’s much earlier than McCarter. The Greer church laid its foundation stone in 1931, according to this article from The Greenville News. The article lists Paul J. Oeland as the contractor.

So far it looked like things were lining up nicely. However, that trend would not continue.

The cornerstone plaque for Florence Moore states that it was built in 1948, the same year as McCarter. However my searches on Newspapers.com turned up no information about the church, other than the occasional mention in an obituary.

This church is identical to McCarter, including the interior. This image, showing new stained glass windows, is from their Facebook page.

Even though I haven’t been able to confirm that this is an Oeland church, I would be absolutely surprised if it weren’t one of their churches. I plan to reach out to the church to see if they have some documentation. I’ll update this post when and if I ever get a response.

Smyrna Associate Reform Presbyterian Church is located in York County, even more remote than the Westminster Church. It’s somewhat out of the range of Oeland, but the architectural features are identical to McCarter, Westminster, and Florence Chapel with one minor difference. Those three churches have three side windows, but Smyrna has four. It’s just a tiny bit larger.

The town of Smyrna has the dubious distinction of being the smallest town in South Carolina. The town was named for the church, so you’d think I could find lots of information about it. I did find a few articles, but they were always in relation to the history of the town, and not necessarily about the history of the church itself.

A marker indicated that the church was organized in 1843, and the current sanctuary was built a hundred years later in 1943.

…but there was no mention of Paul Oeland. Three out of the five churches I’d identified were definitely built by him, but I wasn’t sure about the other two. I needed to know more about Paul Oeland. That’s on the next page…

5 thoughts on “The Oeland Churches”