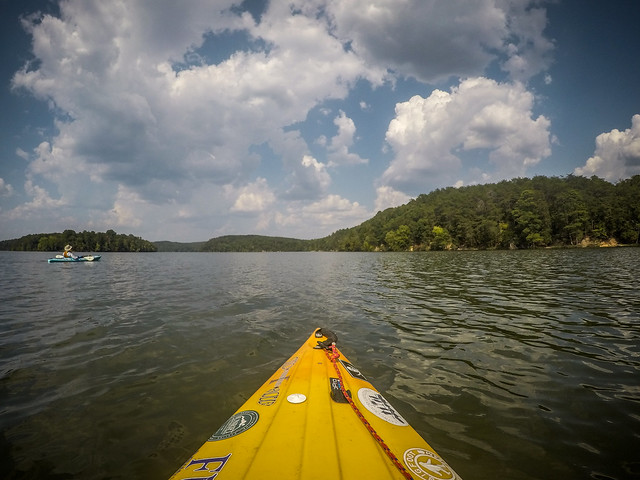 A couple of my Facebook friends regularly paddle Stumpy Pond on the Catawba River. They regularly post photos of historic ruins and lovely scenery, It’s been on my list of places I want to visit. Fellow explorer Alan Russell and I finally got a chance to do just that this week, but this unusual September heat almost got to us.

The photos that most intrigued me were some posted by Bubba Bailey. These were photos of the ruins of an old military installation along the banks of the Catawba. The following photos aren’t Bubba’s, but are from the South Carolina National Register of Historic Places page.

I knew that the lost community of Rocky Mount had a military history dating back the Revolutionary War, but didn’t know the entire history. Rocky Mount had been on my list of ghost towns, so I was pleased to see that there were remains of some sort. As it turns out, these were not from Rocky Mount, but from a military installation that came after called Mount Dearborn.

As I dug into the research for this post I realized that the Catawba Valley has far too much history to unpack in a single post. Here’s just a partial list just in the general vicinity of Great Falls…

Then there are the historic names associated with, or that have had dealings with the area.

I had visited the Stumpy Pond Landing once before. In that post I also lamented the fact that there was too much history and too little time to explore in one day.

For this trip, though, I had two goals. The first was just to get a boat on the water at Stumpy Pond. The second would be to try to find the Mount Dearborn ruins. That would involve both paddling and hiking on a day that set records for high temperatures.

The Mount Dearborn military facility was one of three armories proposed and selected by President George Washington. The Great Falls region of the Catawba had already been a strategic location during the Revolutionary War. The village of Rocky Mount had been a British outpost on a major transportation route, and the high hills overlooking the river made for an obvious location for defense.

In 1802 Secretary of War Henry Dearborn for Thomas Jefferson authorized the purchase of a little over 500 acres from Thomas Sumter for construction of the armory. Christian Senf and Eli Whitney (yes, THAT Eli Whitney) surveyed the site and laid plans for the facility. Col. Senf had overseen construction of the Santee Canal with William Moultrie and was also involved with construction of canals to bypass the falls on the Catawba.

Construction began on the facility, now known as Mount Dearborn, based on plans drawn up by Senf.

Most of the buildings were completed for the arsenal, but not for the armory, the distinction being that an arsenal houses weapons and an armory actually builds them. With the onset of the War of 1812 troops stationed at Mount Dearborn were moved to Charleston. In 1816 Congress briefly considered the creation of a military academy at the site, but instead concentrated its efforts on West Point. By 1825 the site was largely abandoned.

There’s much more to the story. Senf was accused of conflict of interest because of his involvement with the Catawba Canal Company and relieved of duties at Mount Dearborn. Not long after that he died and was buried in an unmarked grave near the arsenal. The canals were never constructed as designed

All of this was interesting, but I wanted to know where the ruins were located. I couldn’t find the exact location mapped anywhere. Even the nomination form for its National Register listing was severely redacted as far as its location.

Even though the site was abandoned by 1825, that didn’t preclude its inclusion in Robert Mills’s 1825 Atlas.

The problem is that these maps weren’t terribly accurate and the topography has changed significantly. The Catawba has now been dammed multiple times to provide power for textile mills at Great Falls and other locations. The “Great Falls” themselves are now dry. Mount Dearborn is on what is now known as “Big Island.” The old maps along with some descriptions I’d read indicated that the arsenal was on the north end of Big Island, but that was still a huge area to explore. The island earned its moniker honestly.

Despite not having the exact coordinates of the ruins Alan and I set out early Thursday morning and made the two hour drive across country. As we drove across Chester County it was an exercise in self-discipline not to get distracted by historic churches and cemeteries along the way. Alan kept reminding me, “We’ve got kayaks on top of the car.”

We made it to Stumpy Pond about mid-morning. It was already blazing hot as we unloaded the boats and got set to launch. A couple of fishing boats were already on the water and we had to wait for one to come in before we could launch.

Stumpy Pond is quite scenic. The river impoundment is surrounded by high ridges and islands formed by the construction of dams and canals. This gives the area a mountainous feel much like Jocassee or Lake Oolenoy.

We headed north. I wanted to get a survey of the banks of Big Island. If we had time, I also wanted to explore the Great Falls riverbed.

Our route took us between Pruitt and Bowden Islands and it was difficult to get a sense of scale of how large and how tall the larger islands were until got through these and spotted Big Island. I could see that we would have a steep climb to reach the top.

The course diverged left and right ahead of us. To the left was the old riverbed and the formerly “Great” Falls. To the right was a series of shoals. About a half mile upstream from that was one of the many dams along the Catawba. Herons, anhingas, and other white wading birds occupied the exposed rocks as osprey soared above. We paddled up to the shoals, trying to catch eddies so that we could see further upstream.

Rather than explore the falls area, Alan and I decided to see if we could find the ruins. We paddled along Big Island until we could find a place to land. It was trickier than we thought, as the bank dropped off dramatically. We were able to use some overhanging limbs to exit our boats, then tied up to a fallen tree.

We had a quick bite of lunch, then set off to explore, first heading north and upward. The area was strewn with large boulders. We would see a straight horizontal line through the trees and think it was part of the ruins, but it always turned out to be a fallen tree.

Eventually we reached a dirt road that runs along the spine of the island. Higher ground was toward the south, so we headed in that direction.

We didn’t see the ruins we hoped to see, but we did come upon some low walls and what appeared to be trenches.

My local expert, Bubba Bailey, said that these ruins were from 1909. Workers from the dam construction crews had a goat farm on the island. The long concrete beams marked trenches where they would dip the goats to remove parasites. We didn’t find goats, but we did find a few other interesting remains.

After hiking in the heat for far longer than we wanted, we decided to head back to the boats. Sadly, if we had just headed north instead of south, we would have come upon the ruins we sought. Oh well. Next time.

Back on the water we decided to head up another arm of the lake. I wanted to see if we could get close to the dam right at Great Falls. We rounded the south end of Big Island, heading between it and Goat Island. I’m guess that name comes from the 1909 farm on Big Island.

The south end of the lake had large houses with docks. We hadn’t seen houses anywhere else on the lake. We continued on around, but the heat was just too much. We turned back before we reached our destination and headed back to the ramp.

Our combination paddle/hike was 8.3 miles in nearly 100º heat, far too hot for a day in September. I told Alan we needed to come back in January when it’s only 80º.

I’m sure this won’t be our last visit to Stumpy Pond. Now we know where to find the ruins, and there is much, much more to see.

4 thoughts on “A Hot Sample of Stumpy Pond”