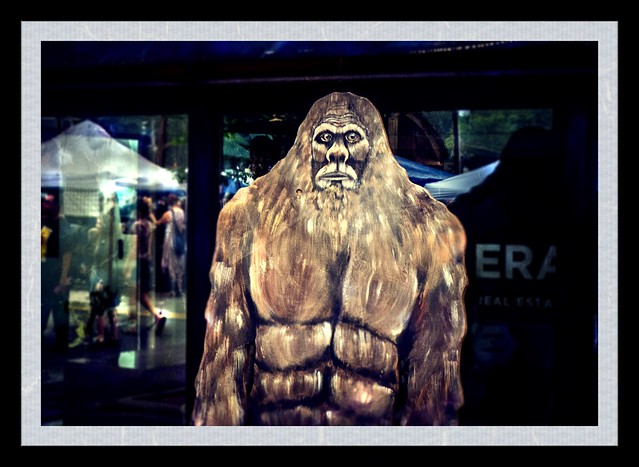 The TV show “Finding Bigfoot” had the biggest misnomer for a title. They never found him/her. All they did was run around in the woods making noise, claiming evidence that was easily debunked. I guess “Making Fools of Ourselves While Looking for Bigfoot” wasn’t quite as catchy.

Despite my skepticism, I like Bigfoot stories. I love the legends and stories behind all cryptids. So, this past Saturday Paul Wagenknect and I found ourselves at the 2019 Western North Carolina Bigfoot Festival in Marion.

Marion’s Bigfoot Festival is always the Second Saturday in September. (At least, it has been the two times that they have had it.) . That means that it conflicts with my Second Saturday paddling trips with Lowcountry Unfiltered. This year Matt was off exploring Route 66, so we didn’t have a paddling trip and I was available for this festival. How could I not take part in this bit of weirdness?

I didn’t have any Bigfoot bling like a t-shirt, but I did have a Bigfoot multitool I could hang off of my bag.

Paul didn’t have Bigfoot bling, either, but his choice of T-shirt was still appropriate.

We drove across country to Marion. Along the way we passed through the town of Landrum and noticed that they were also having a festival. We decided that if we had time on the way back, we would check it out, too.

I’d heard stories that I-40 was backed up in both directions last year leading into Marion. We didn’t encounter those problems, but things were staring to get crowded in the town itself. The biggest problem was parking. There was official parking with shuttle buses at the local high school, but we decided for something a bit more reliable. Some property owners were charging as much as $20 per car for parking close to downtown. We found one charging $10, so we opted for that. That homeowner had a large yard and was going to make a killing that day.

We were at the start of the festival, but crowds were already gathering. We did an initial first past the length of the festival. There was more Bigfoot merch than you could shake a stick at.

Bigfoot stuff is popular. It looked like some of these vendors really specialize in Bigfoot swag all the time. Others look like artisans that created products just for this festival.

But Bigfoot wasn’t the only cryptid in attendance. Aliens and just about any other conspiracy theory was in evidence in Marion. There were even t-shirts pitting Bigfoot against aliens. Many had the phrase “I Believe” as a tagline.

…and speaking of believers, there was an odd entanglement of Bigfoot with religion. I won’t delve into certain types of gullibility, but everywhere you looked in Marion there was a religious presence. I’ve been to festivals where church groups get involved and have booths, but this went far beyond that. There was one church with large yellow signs condemning sinners and I was handed tracts for at least three other groups. One had t-shirts and tracts that featured the classic Patterson pose surrounded by the phrase, “I once was lost, but now I’m found.”

Paul thought he even saw a Bigfoot Crucifix, but that seems to be going a bit too far even for this group. Even so, I didn’t realize that Bigfoot was a supporter of Israel.

There were lots of folks dressed for the occasion, some more than others. I’m sure there was a mix of True Believers™ as well as folks just out to have fun.

Even Mayor Steve Little was out and about, but I don’t think I’ve ever seen Sasquatch dressed like this.

There were plenty of opportunities for selfies with either cut-outs or characters in (some very lame) costumes. Most of these charged for the opportunity.

One of the festival sponsors Bigfoot 911, a research group based in North Carolina. While most of the event was focused on selling Bigfoot stuff, there were a few booths (not many) dedicated to presenting Bigfoot evidence, including blurry photographs and footprint casts.

There weren’t many of these tents, and they tended to be crowded.

Bigfoot 911 had brought in Cliff Barrackman, one of the stars of the show “Finding Bigfoot.” He would be holding a town hall later in the day, but when we passed by he was swamped by a line of people waiting to have t-shirts autographed and selfies with him.

At noon there was to be a Bigfoot Calling Contest in front of the court house. A stage had been set up for that event and for the town hall that would follow. People were signing up to compete in the contest.

After making a couple of passes through the festival Paul and I decided we had enough. With the crowds building we also didn’t care to stick around for the calling contest or town hall. As we walked back to the car we heard music coming from a music/pawn shop. They were having an old-time jam, much like the ones at the Pickens Flea Market. I sort of wished I had my banjo with me.

It was getting close to lunch and we didn’t care for any Bigfoot Burgers or Sasquatch Scat. We found an excellent Mexican restaurant on the outskirts of town, away from the crowds.

We made our way back down the mountains from Marion, but we weren’t done with festivals. It was still early enough in the afternoon that we stopped by the Hogback Mountain Festival in Landrum. This was just a small street festival, tiny in comparison with Marion. There were still artist booths and other activities.

There was an excellent Bluegrass group playing on a flatbed trailer stage. Paul and I stuck around to listen to a few tunes.

Bigfoot…Hogback…we wondered if there were any other festivals today featuring some sort of animal body part. After a stop at one of Paul’s favorite antique shops we headed back home. The adventure was fun, but now that I’ve seen it, I don’t feel the need to head back to Marion for the third annual Bigfoot Festival next year.

2 thoughts on “Finding Bigfoot in Marion”