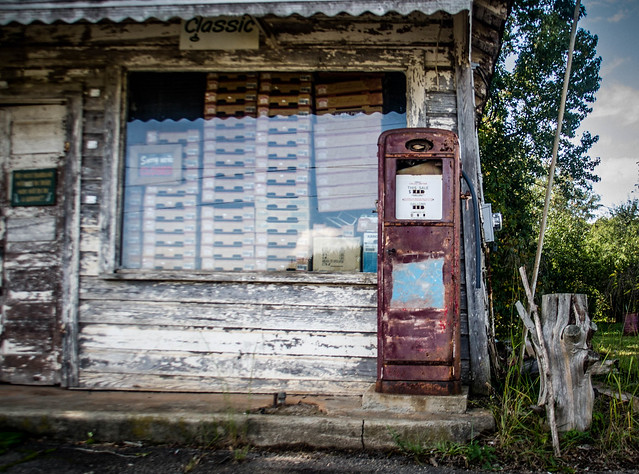 Even though I haven’t been able to finish my explorations of the Tobacco Trail, I haven’t been sitting idle. Once the rain stopped we had some spectacular weather, and I decided to get out and about. I hit a few spots in the upstate, so this is sort of a miscellany wrap-up of the week. This is part one of about a three-parter. This first part actually took place last week, before the deluge…

Sometimes I just hop in the car and head out, with no real direction in mind. I’d been spending a lot of time in the library doing more research on the Bankhead Highway, and I guess that pushed me in the direction of Taylors, and part of that old route. Normally I get shots of the old mill or Chick Springs, but what caught my eye this time was the old service station. 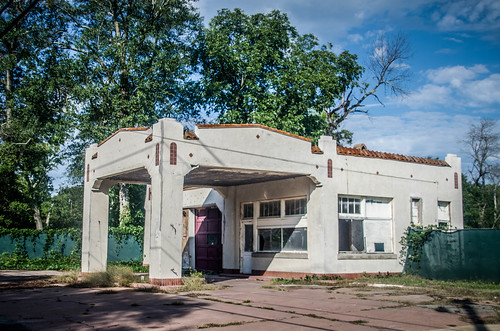 I began to wonder if this structure would have been around in the 1920s during the time of the Bankhead Highway. It looks old, but being “old” and being from a specific historic period are two different things.

I cut across to Aiken Chapel Baptist Church. This historically Black church has typical architecture for this area – brick Classical Revival with a steeple on front. What is unusual is the old bell tower in the cemetery. 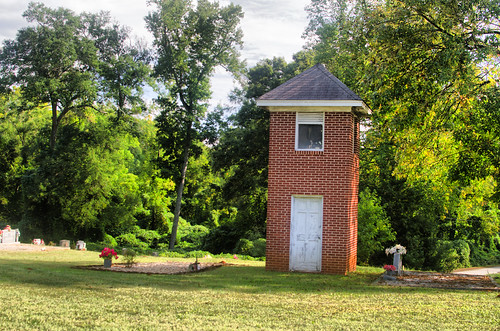 Hold that image for a moment…

I had searched this area previously for a couple of old wood-framed schools for which I had images. There is the old Taylors High School across the main road, that has been wonderfully restored and is now in use by a religious group. These were different, older structures. I couldn’t find any trace of them, so I kept going.

Aiken Chapel road connects with Wade Hampton. From there I turned onto St. Mark’s Road. At the end of this is St. Mark’s Methodist Church, another historically Black congregation. The church has an older Classical Revival building, but a much larger, more modern structure now serves as the main sanctuary. However, it was the cemetery that caught my attention. There was another bell tower, similar to, but more elaborate than the one at Aiken Chapel. 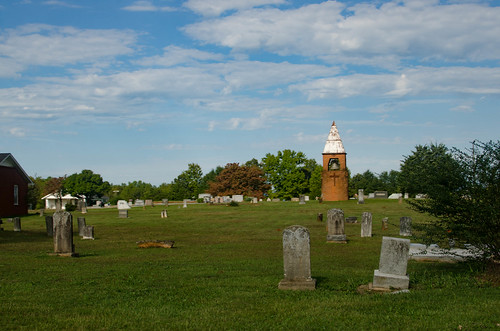 For both Aiken Chapel and St. Mark Methodist it appears that the bell towers are independent structures, and not part of any original church building. I would have explored the old cemetery at St. Mark, but grounds crew was working, and I didn’t want to get in the way. I continue on.

I zig-zagged through the countryside, taking lots of photos, but nothing really catching my interest. I was mainly just enjoying the beautiful clouds against a brilliant October sky. It must be bad when a kudzu-covered backhoe is the only photo in that stretch that got posted to Flickr. 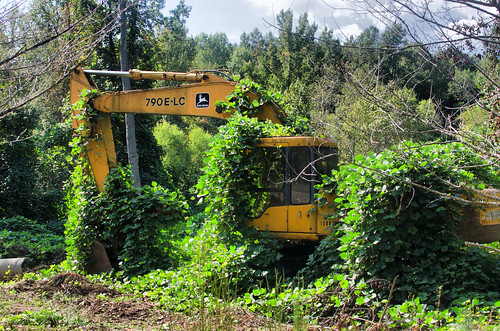 I wanted to frame a shot that captured the sky. I remembered a field with a silo on Talley Bridge Road, so I headed that direction. 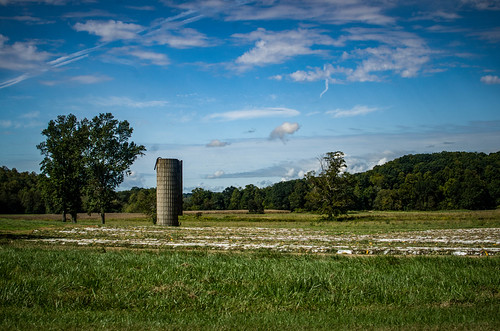 Following Talley Bridge brought me through the northern edge of Slater. I didn’t drive through the little mill village – I’ve photographed the area many times. However, I did decide to explore some of the side streets of Marietta.

On Chestnut Ridge Road I found an old abandoned church. The building was an unremarkable 1940s vintage building that looked like the steeple had been added as an afterthought. The steeple was now leaning precariously, as its supporting structure had eroded away. It looked like the entire place was about to be swallowed by vegetation. 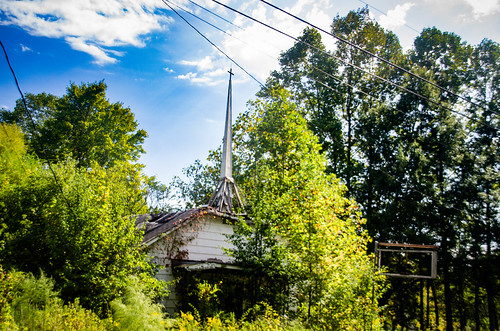 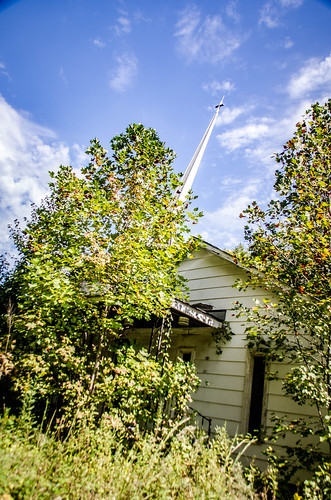 I posted the image to the “Abandoned, Old and Interesting Places in South Carolina” Facebook group, and got some interesting responses. Sylvia Hembree commented that it had been a Church of God of Prophecy, and that her grandfather, Rev. Marvin had been the pastor.

My Grandfather preached at this church before he had several strokes. It was a Church of God of Prophecy. I sat on the front row… most of the small children did; at least when I went we had to. My grandparents lived just a few houses up from the church. My grandfather also had a barber shop…. the only sign I see of it now in Marietta is the power pole painted red & white with the spiral stripe.

Sylvia was kind enough to share one of her family photos. I think this image was taken in front of the church. 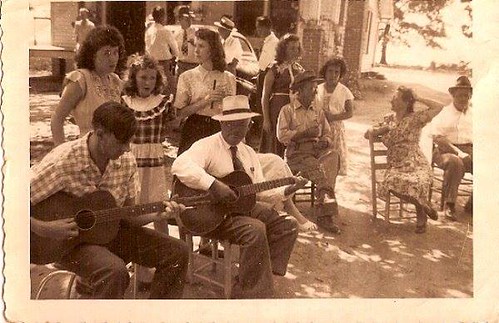 Grandfather has on the white hat … my mom & aunts are standing behind him… my uncle is sitting beside him… grandmother is in the chair with her hand on her head. My mom is holding her flute which she played in church as well as the piano & they all sang in that church.

The church and the image Sylvia shared reminded me of growing up in a similar church in Laurens County. Mark Elbrecht found that the church had ceased operations about ten years ago. It seems like the decay has been going on a bit longer than that, but who knows.

I popped back onto the main drag of Marietta. I’ve always breezed through this area on the way to greater things up in the mountains. I hadn’t taken the time to appreciate the old historic buildings lining Highway 276. There’s a hardware store that looks like it’s been in operation forever, but what caught my eye the buildings across the street. A phantom sign proclaims “Washette – coin operated,” but its architecture belies a more interesting history. 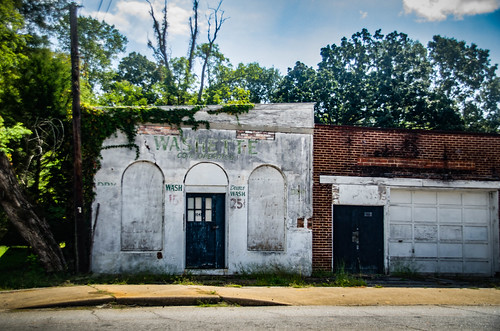 The arched windows reminded me of so many old banks I’ve seen in tiny towns across the state. However, Marietta native Keith Dover told me that this was actually the old post office. At one time it was a two-story structure. Looking back at the roofline, it does seem a bit odd.

I wrapped up my travels by stopping for a late lunch at the Whistle Stop Cafe in Travelers Rest. I won’t do a formal review in this post (perhaps later?), but it was a good lunch. A couple of things caught my attention, though.

First, there was the mural. It certainly was an eye catcher, and I wasn’t the only one taking photos of it. 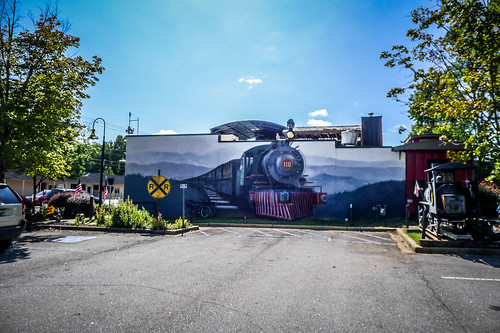 What I didn’t realize is that I am somewhat responsible for the way this mural looks. Vickie Hawkins is the proprietor of the Whistle Stop, and Brigitte Selby is the artist who painted the mural. While tracking down link backs on the stats for my blog, I stumbled upon this public exchange on Facebook. 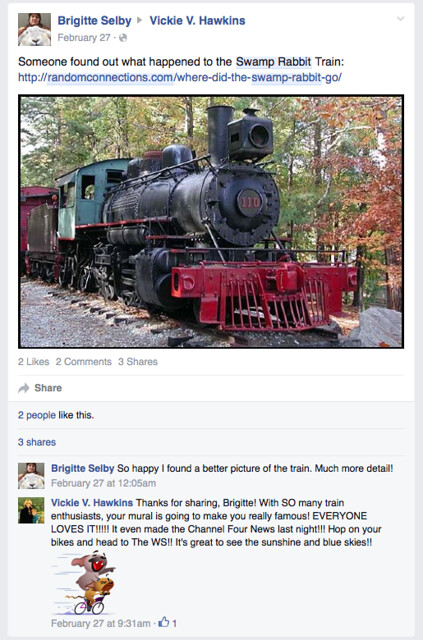 The image she references is a photo of the “Yonah II,” AKA Cliffside 110, AKA The Swamp Rabbit as it was during the Echo Valley days. The photo shows the train on the sidelines at Stone Mountain Park in Atlanta. I didn’t take the photo, and don’t remember where I found it, but I included it in my blog post tracking down the old engine. 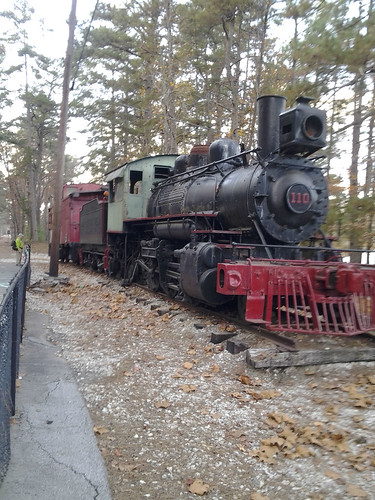 The mural certainly looks like the Yonah II photo, right down to the angle and color scheme.

The cafe is covered with antiques and vintage images. Amongst all of this I spotted a sign in the restaurant for the Swamp Rabbit Railroad Ticket Office. 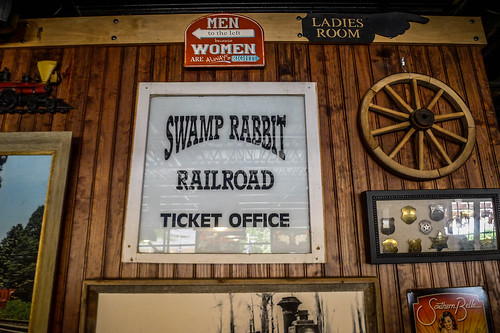 I asked the host about it, and he said that he thought it was authentic. I stated that if it was authentic, then it must have come from the old Echo Valley Park, and not from the actual railroad. If it had come from a real railroad station on the line it would have used the official name, the Greenville and Northern Railroad. “Swamp Rabbit” was an unofficial name.

I wrapped up my travels and spent the rest of the afternoon doing more library research. The beautiful day was the calm before the storm, quite literally.