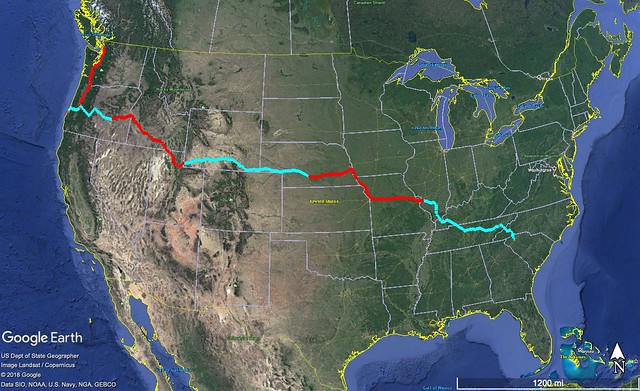 It a long haul from Samish Island, Washington to Greenville, South Carolina. It’s even longer when you’re traveling with animals and have a limited drive time. Last time I did this drive it was with our two cats. This time we were traveling with Amy’s dog, Luna. Also, instead of heading straight home, we threw in a side trip to Oregon to visit Laura’s Aunt Ellen.

If we were already on the west coast it seemed a shame not to visit Aunt Ellen. So, we decided to leave the island early and drive down to Coos Bay. Traffic on I-5 through Seattle, then through Portland was horrendous. We left the Interstate at the tiny town of Drain, so we headed down the Drain and made lots of other bad puns.

The route runs through some beautiful mountain valleys and eventually parallels the Umpqua River. My mouth watered at all of the paddling opportunities. Some day I’m going to have to just hang out here with my boat.

Not far from the coast there is an elk observation area on the banks of the Umpqua. We stopped for a bit, and the elk obliged us by hanging out where we could see them.

Soon we reached the Pacific Coast Highway at the town of Reedsport in the Oregon Dunes. From there it was twenty-something miles down to the bridge over Coos Bay and into the town of North Bend.

Aunt Ellen is a dog person, and was happy to meet Luna.

We had dinner out the road out to Bastondorf Beach south of the town of Coos Bay.

We wanted to watch the sun set over the Pacific Ocean, but we had quite awhile until that time. We decided to drive down the coast a bit then return to Bastendorf. We found ourselves at the Simpson Reef Overlook.

There was a cacophony of sea lions on the rocks down below.

Other activity caught our eye, though. We spotted the plumes of several gray whales. A local couple said that a pod of the whales had made a permanent home in the area.

With so much to keep us occupied, we decided to stay at the overlook to watch the sun set. Aunt Ellen insisted that we remain until the sun was completely gone.

We drove back to Aunt Ellen’s house, then headed back to our hotel for the evening.