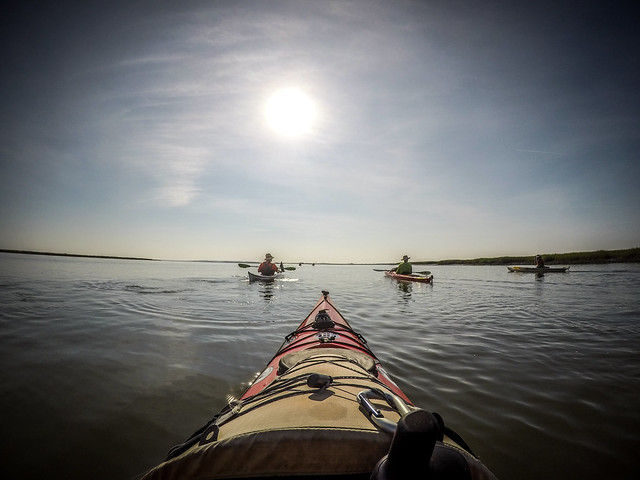 As a teenager I’d read a South Carolina Wildlife article about Capers Island, a barrier island on the coast. The place fascinated me, a wild, undeveloped island accessible only by boat. On this paddling trip with Lowcountry Unfiltered I was to learn that there are TWO Capers Islands in South Carolina, and the one we visited had some unusual human-created features. I also had some fascinating adventures along the way.

We went back and forth on the planning for this trip. At one point it was going to be the third Saturday and we would be paddling from Fort Fremont to Bay Point on St. Helena Island below Beaufort. Finally we went back to the Second Saturday and decided to paddle from Station Creek Landing on St. Helena to the southwestern end of Capers Island.

Adventures along the Way

It’s a four-hour drive from Greenville down to the put-in. We would be meeting fairly early so that we could catch a favorable tide, so my best bet was to head down Friday evening. I loaded up Big Red and set out a little after lunch.

Friday afternoon traffic was horrible. It’s the last weekend before school starts back, so many were taking advantage of a coastal escape. After frustrations on I-26 I left the interstate for back roads.

My first stop was at the UFO Welcome Center just north of Bowman. This is a popular roadside oddity, but it’s really starting to look decrepit.

I posted the photo with the kayak to the Church of the Double-Bladed Paddle Facebook page as an example of extreme Mothership Kayaking.

As I was driving south from Bowman on Highway 178 I saw a sign for Shady Grove Campground. I remembered that this was one of the historic camp meeting campgrounds in the area. I had to check it out.

I’m familiar with camp meetings. My family used to attend camp meeting for the Pentecostal Holiness Church at Beech Springs Campground near Pelzer. The campground had an open air tabernacle, cabins, and a dormitory. The tabernacle was originally a wooden structure with sawdust floors. A brick structure replaced it, which was finally enclosed.

The historic camp meetings have a similar structure. There is a central tabernacle ringed with “tents. The tents used to be actual canvas tents, but were replaced with wooden structures passed down to families from generation to generation.

Shady Grove is a Methodist camp founded in 1870 for African American worshippers. It follows this same format.

The tents were densely packed. There was only one clear entrance into the interior of the space.

The central tabernacle had been enclosed. There was a camp stove next to the tabernacle and two historical markers.

On the outside of the circle were the privies. The tents had no indoor plumbing, so outhouses were necessary. There was one for each tent.

Alan’s father-in-law has a farm near Indian Field Camp Meeting, the white Methodist campground. He said that ideally there would be concentric rings. In the center would be the tabernacle and any community buildings. There would be the ring of tents, followed by a kitchen ring. Originally the kitchens were not attached to the tents to prevent spread of fire, but later these were connected. There would be a ring road, with the outhouses on the other side of the ring road.

Here’s an overhead view of Indian Fields from Google Earth, followed by a view of Shady Grove.

Alan also said that, at least in regards to Indian Fields, the tents were completely stripped of furnishings and any other objects so that there would be no temptation for theft. Even the light bulbs are removed, indicated that at even there there might not be plumbing, at least there is electricity.

I did find several YouTube videos of camp meeting services at Shady Grove. Here’s one…

There were more adventures yet to come and I haven’t yet gotten to the paddling trip. The tale continues on page two…

4 thoughts on “Paddling to Capers Island”