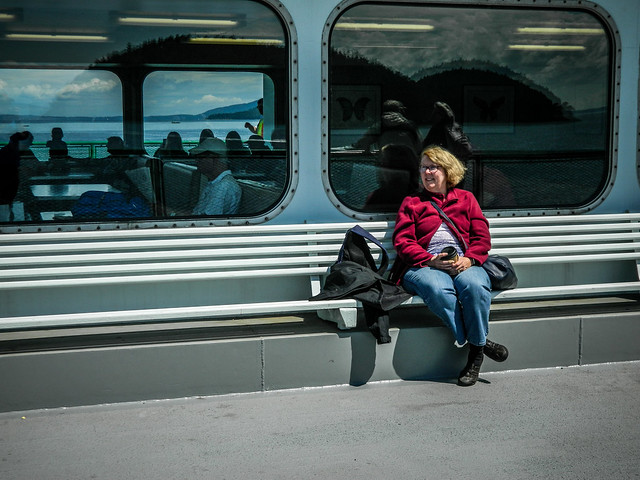 We had taken one ferry trip, but the Keystone to Port Townsend trip was a bit short for Laura’s tastes. She wanted a longer ferry ride. So this past Wednesday we headed over to Anacortes to catch the ferry to Friday Harbor on San Juan Island.

This time we would be walk-on passengers. Our plan was to ride out, disembark, then just get right back onto the same ferry. We’ve done this trip many, many times with Laura’s mom, who used to love ferry rides. It’s a great way to see the scenery, get a boat road, and maybe even see some whales.

For me, this would be a test of the Nikon Coolpix L120 I picked up at the Anacortes Shipwreck Fest last Saturday. I got it for a mere $20. Since it was a used camera I was glad that it used AA batteries instead of rechargeables because you can never be sure of the condition of those batteries and whether or not replacements are available. AA’s may not have the convenience of recharging, but they are reliable.

I would also have my trusty Panasonic Lumix with me, but I really wanted to test the Nikon. I got it so that I’d have a camera with a longer zoom lens for shooting eagles and other birds, without having to drag my big DSLR and lenses out here every time. This camera would stay at the island house.

I had taken the camera out for a few photos the day before, once while walking the dog and once while running errands. I got some decent shots of Mount Baker.

Our ferry trip started with breakfast at The Farmhouse. This was our second visit, and once again I got the seafood omelette. I figured that’s something I can’t get back home. We drove on over to the ferry terminal and entertained ourselves with the radio while waiting for our ferry to arrive.

Once on board we watched the anhinga’s nesting and feeding their young on the pylons next to the boat. This is where the Nikon’s zoom lens came in handy.

Even though Baker wasn’t visible today, it was till a gorgeous day for a ferry ride out to the islands. There was a report that the Mulkiteo Ferry Terminal was delayed because of a pod of orcas. We were hoping to see some whales along our route, but that was not to be. I checked to see if there was a radio frequency that the whale tour boats might use. What I found online said that they use standard marine frequencies, but tend to talk in code so as to keep others from crowding around the pods.

I took a few photos on the way out, but did more watching through the binoculars and just enjoying the ride. Most of the photos I took were of scenes I’d photographed many times before.

At Friday Harbor we got off the ferry and walked right on around to the passenger waiting area for the return trip. I made a slight detour to get some ice cream.

On the way back we had a bit of entertainment. A guy was walking past and I commented on the unusual case he had, suspecting that it might be an accordion. Turns out, it was. He had just bought it used and was trying to learn how to play it. He sat with us for awhile playing, and even let me try for a bit.

I regretted not having a banjo, guitar, or some other instrument to accompany him. I guess I’m going to have to start dragging my guitar along on ferry trips on the off-chance I meet a wandering accordionist.

As we continued on our trip I kept taking photos with the Nikon. It would occasionally glitch when I tried to zoom, and I now understand why it was for sale. It tends to lock the image on the LCD as if a photo has been taken, but no photo was taken. If this were my primary camera that glitch would drive me crazy. As a back-up, I’m OK with it. It seems like it takes decent photos.

It was a lovely day out on the water. Once off the ferry and back in our car we had an early dinner and ran a few errands in town. On the way back I started to get a visual aura like I was getting a migraine. I let Laura drive the rest of the way home and was able to get meds into me before the worst of it hit. I turned in early that night. First migraine I’ve had in years.