Laura is out of town for a couple of days, so I figured it was the perfect time to check out some more of my ghost towns. The plan was to leave out very early in the morning and head to the eastern part of the state. But…

I overslept. I tend not to sleep very well when Laura’s not in town. So, the plans had to be altered. Instead of the eastern part of the state, I decided to check out some of the locations in the Savannah River Basin near Augusta.

Since the change was somewhat spur of the moment, I didn’t have all the prep work I usually do for one of these treks. I grabbed my cameras, my DeLorme atlas, and a copy of “South Carolina One Day at a Time” and headed south on highway 25 toward Augusta.

I really should have taken the Interstate. The problem with rural roads is that i pass through so many distractions that could keep me from my target. The towns and communities of Greenwood, Kirksey, Edgefield, Saluda, and many others passed by, and I had to resist the urge to stop and shoot. The Field Trip app on my iPhone kept pinging with nearby historical markers, but I kept going.

Eventually I reached the outskirts of North Augusta. I have fond memories of the town. When I was a teenager my brother Houston lived here with his first wife, Vera Lynn, while she was in medical school. One summer I came down and spent three weeks with them. Houston and I did pinhole photography, camped out in severe thunderstorms, and got into mischief in general – not too different from what we still do.

As one crests the sand hills there is a spectacular view of Augusta down below. I enjoyed it momentarily, then continue across the bridge into Georgia. Somehow I found myself on River Watch Parkway headed north, and completely away from where I wanted to be. There was plenty of cool architecture, and the Augusta Canal looks like somewhere I want to explore further…another time. I still had a target to find.

My target was the ghost town of Hamburg. It was one of a series of towns located along the Savannah River that were named for European cities. The others included St. Petersburg and Vienna. Hamburg is unique on my list in that it was supplanted by a later city, North Augusta.

Henry Shulz built the first toll bridge across the river in 1814 so that crops could be traded with Augusta. The town grew quickly, and was incorporated in 1821. The first railroad in America ran from Charleston to Hamburg, delivering goods that could then be shipped inland via the waterway. The famous “Best Friend of Charleston” was the first engine to run along this line starting in 1830 until its unfortunate demise a year later.

This worked out well for Hamburg…for awhile. The goods were offloaded in Hamburg then shipped across the river to Augusta. Of course, if one bridge could be built, then another that could support an extension of the railroad could not be far behind. With the railroad now connecting all the way to Augusta, there was no reason to stop in Hamburg. Augusta also built an improved canal on the Georgia side of the river, meaning that it was better for goods coming down the river to be traded at Augusta. By the Civil War the town was in decline.

After the Civil War Hamburg experienced something of a rebirth as a Freedmans town. In 1876 there was a conflict between black militia and local white farmers, which came to be known as the Hamburg Massacre. The resulting violence left seven men dead. Hamburg continued its decline. The Sumter Watchman and Southron reported in 1914 that the last assets of the town would be sold. By 1923 all residents had left. The resort town of North Augusta grew to take its place, just north of the former location of Hamburg

Enough of the history lesson…

I wasn’t exactly sure where to start looking for Hamburg. I knew the general area. I had also read J. M. House’s description of his search for Hamburg on his City of Dust blog. I had seen the buildings House described in Google Earth, and set off to find the coordinates.

I was able to find the historical marker for the town, but couldn’t get to it because of traffic. I found a turn-off and a side street that led to the old 5th Street Bridge, now replaced by a newer one. I followed this road until it turned to dirt, then circled back to my starting point. 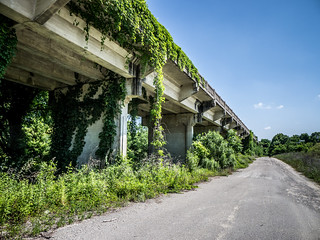 The road that House took was blocked off. I could only view the buildings he explored from a distance. 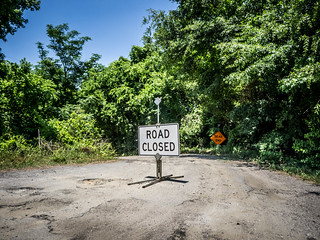 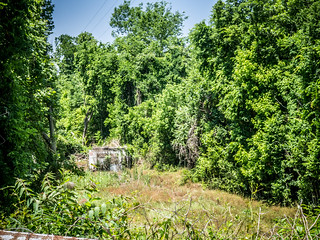 I crossed the river on the 5th Street Bridge into Augusta. There I found the entrance to the city marina, so I pulled in and parked. I could see the pilings for the old highway bridge and the coastline of what had been Hamburg, but there wasn’t much to mark the old town. 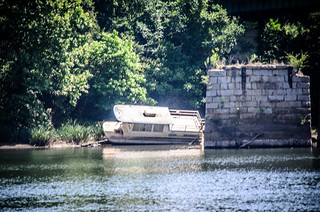 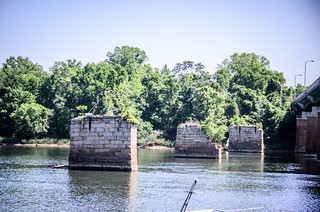 There was an old steel railroad trestle. I followed a walkway under it, then climbed a hill for a better view of the railroad bridge and the rails leading down the middle of a street. 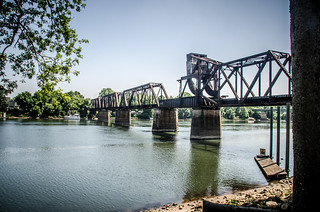 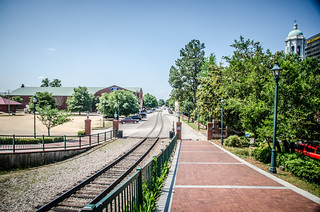 I walked down the street, looking back at the rails. Across a lot was a very long railroad depot, but there were no tracks that I could see next to it. St. Phillips Episcopal was next to the tracks, and the Augusta Museum was on the next block. I walked down there, but found it closed. 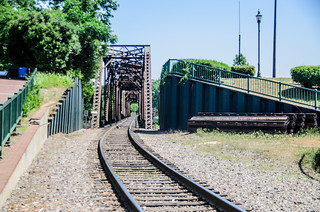 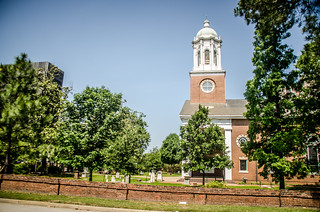 I walked back up the hill on the other side of the tracks and started my way back to the car. I’d been hearing a train horn off in the distance, and had assumed it was on some other tracks somewhere. Surely the old bridge wasn’t still in use, and surely trains didn’t run down the middle of a major street. Imagine my surprise when I spotted a train starting to cross the bridge. 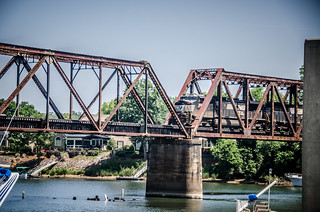 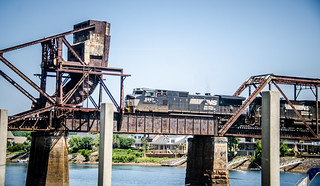 I hopped in my car to follow, and sure enough, traffic was at a standstill until the train passed. The picture below was the best shot I got. In the distance you might be able to make out the train going down the street. 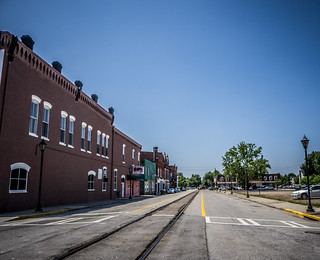 Since I was mobile and on this side of the river I decided to drive down Broad Street, which I guessed from the map I had to be the main drag of town. Driving along the downtown area struck me as being very seedy. Honestly, I don’t remember much about my time here as a teenager, but I have vague impressions of it being even worse back then. I drove up the street and back, and decided I’d seen enough.

I grabbed a bit of lunch as I contemplated my next move. I planned to head on out toward the Savannah River Plant and the towns that had been displaced by the government. However, something nagged me about Hamburg. I headed back down Highway 1 past the historical marker and over to the old bridge one more time. The dirt road I had taken previously had turn off into a fancy riverbank housing subdivision. I’d skipped in the first time. This time I turned in, and was rewarded with the only remnant of Hamburg I could find. This was part of an old brick factory located at the south end of Hamburg. 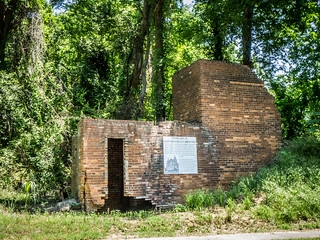 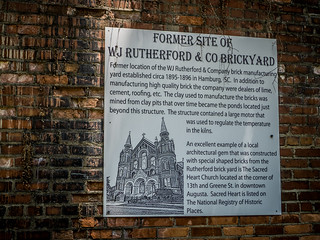 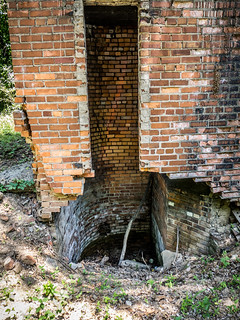 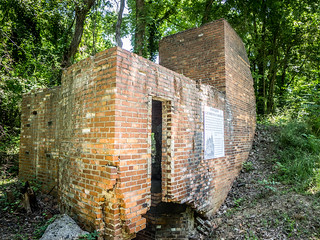 …and that was all, the only thing left to indicated that the town had been here. It was time to move on and see if I could find some Atomic Towns.

One thought on “Hamburg and the Atomic Towns – Part One”