The group was offering three tours. At 6:30 there was a tour symbolism and iconography of the graves. That’s the one I really wanted, but it was already sold out when I got around to booking. There were two more tours at 8:00 and 9:00 that covered the general history of the cemetery and those buried therein. I though about delaying a month, but that would put us into October and too close to Halloween. I couldn’t be sure about them offering some hokey ghost-related something. So, I went ahead and booked us the 8:00 tour.

On the appointed day I headed down to Columbia early and had a lovely meal with Dwight and his family. Dwight had gone with me on the tour of the Historic Bull Street State Mental Hospital, and he keeps me updated on cool happenings in his town. It seemed appropriate to include him on this tour. I can’t imagine why his wife and son wouldn’t want to roam around an old cemetery at night, but they decided not to join us.

We drove back through town to Elmwood. The cemetery is on the north end of town, right next to the I-26 spur. It’s more noticeable driving out of town, but it is quite prominent. We found a place to park and checked in with the hosts. Soon a group of about thirty were gathered for the tour. I had already expressed concern to Dwight about it being too dark to see anything. As the group gathered my concern grew. I made sure I had a good flashlight with me. I also mounted my fast 50mm f/1.8 lens on my Nikon for low light shots. My other gear included my smaller Panasonic Lumix and an audio recorder. I wanted to make sure I got the details of the tour, but, who knows? I might even pick up some EVPs. 😉 Regardless, at times I felt a bit lugged down with gear.

Our tour guide for the evening, John Fleagle, was decked out with top hat, cane, and tails. He started with a general overview of the cemetery. 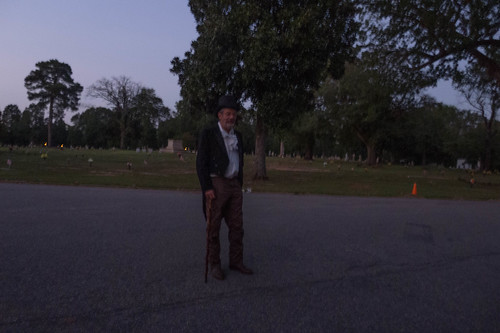 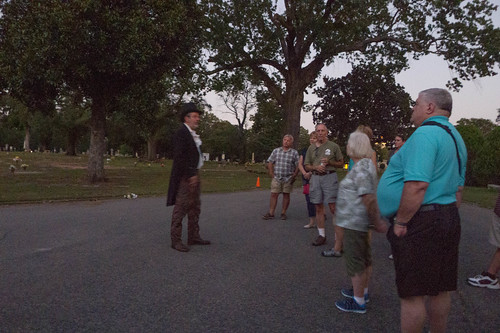 Elmwood Cemetery was established in the 1850s. At the time there was an outbreak of disease in Columbia. The thinking of the time was that dead bodies caused disease, and that moving the cemetery out of the town would decrease its spread. Elmwood was the solution, located at the extreme north end of town. Since it’s establishment there have been about 25,000 interments. The cemetery is still active.

Our tour took us to the graves of fifteen prominent citizens of Columbia, starting with Dr. Edwin Scott. Scott is best known for his memoir, “Random Recollections of a Long Life: 1806-1875.” 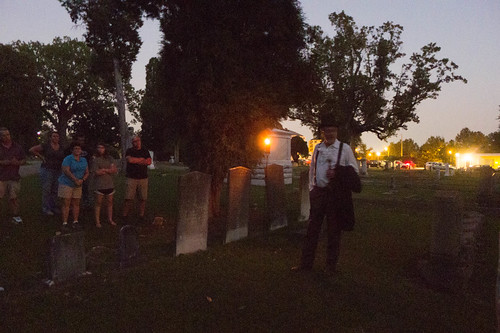 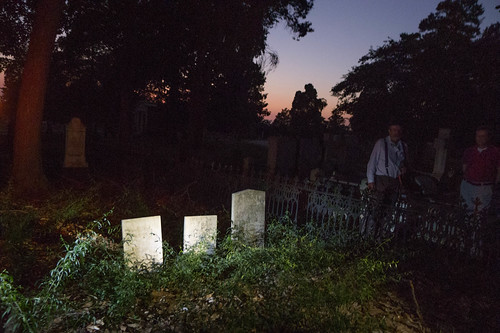 At about this point Dwight and I realized our misgivings about the tour were coming to pass. It was too dark. Sure, it was atmospheric with the lit torches, etc. However, you couldn’t see the stones at all unless you had a flashlight. All the details were lost. From our guide’s standpoint that wasn’t a problem. He was very knowledgeable about history and the people buried in the cemetery, but knew nothing about symbolism and iconography. He confessed as much himself when someone asked about a particular symbol. I guess the darkness worked in his favor. To be fair, the tour we REALLY wanted at 6:30 did cover symbolism, and would have been earlier when it was light enough to see.

Since the cemetery was established right before the Civil War, many of the notables we visited were Confederate veterans. There were several medical doctors, as well as theologians. I tried to take photos as I could. 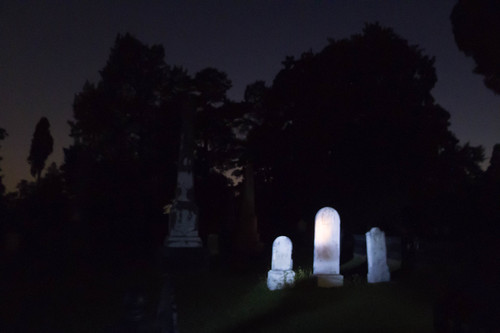 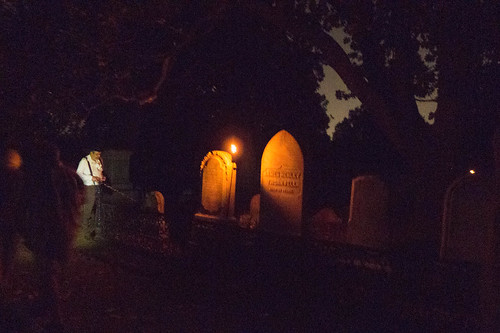 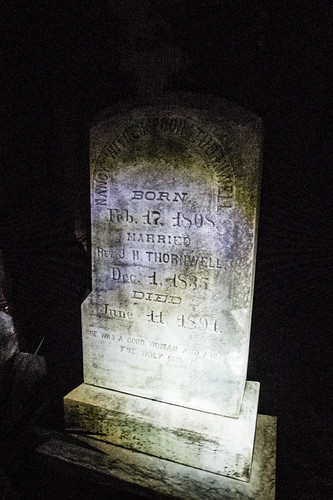 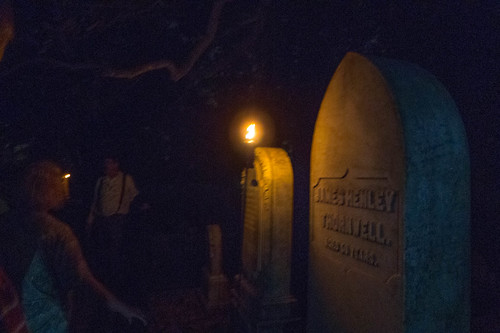 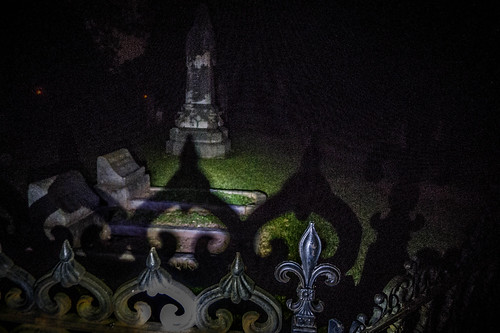 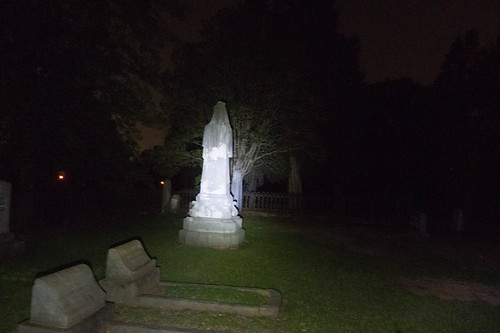 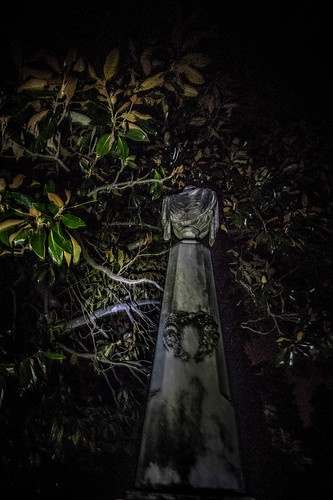 There was some excellent statuary, but I couldn’t get the lighting right. I find flash photography very annoying in a setting like this, so I didn’t even make the attempt. Also, if I did pause to get a shot, I’d get left by the tour group. Again, our guide was focused more on the people than on an elaborate graves with cool statuary, so we bypassed many that I would have liked to have explored further.

I did manage to get some signature stones, though. Since the cemetery is post 1850, most of these were the later Whites, such as W. T. White and R. D. White. 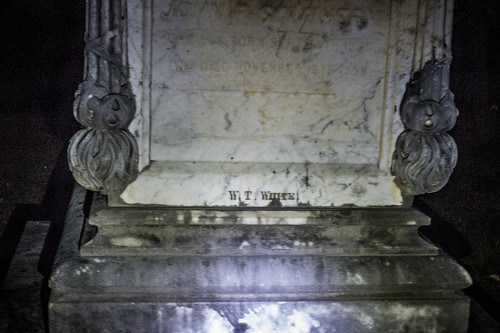 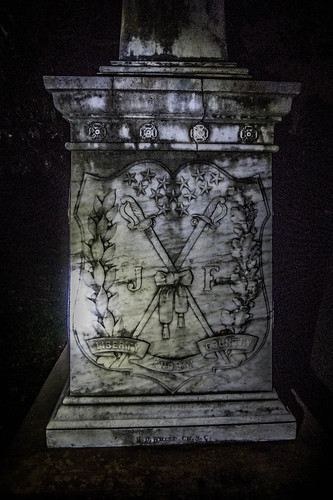 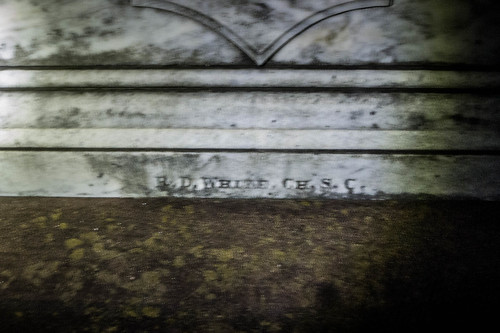 Soon we ended up our tour at the elaborate grave of A. M. Talley. It completed a circuit, of sorts. Edwin Scott credits Dr. Talley for saving his life and allowing him to complete his memoir. 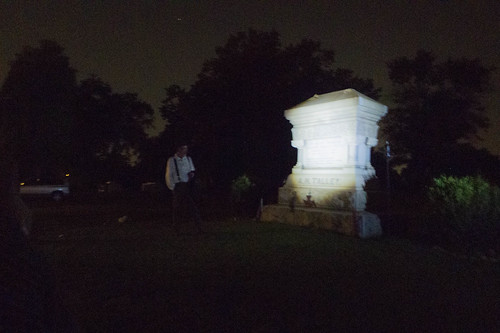 I chatted with our host, and he asked if I had caught any EVPs on my recorder. To be honest, I haven’t even listened to that recording, but my skeptic brain seriously doubts it. Plus there were so many other side conversations that such a thing (assuming it did exist) couldn’t be verified. I did manage to catch some ghostly orbs in one shot. 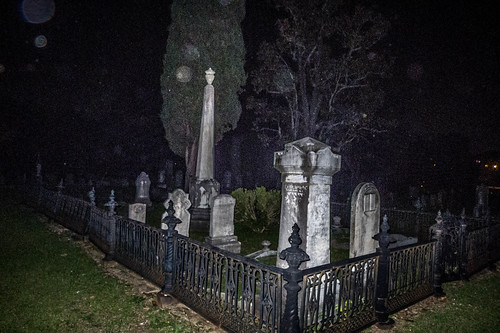 This was my only flash photo, and I just had some crud on the Lumix lens, but I know some ghost hunter types that would go crazy over this image.

Despite the shortcomings, the tour was quite enjoyable, and I’m glad we did it. Dwight and I said that we both want to come back in daylight and explore further. We also want to do the symbolism tour, and see how that differs from this one. We were invited to come back next month when there would be re-enactors for Halloween. No thank you. In this case I think I’ll stick to straight history rather than scary stuff. As Dwight and I were leaving, an employee of the cemetery handed us folders with information about Elmwood “for our future planning.”

UPDATE: A bit more info on the cemetery…

Elmwood is on the National Register of Historic Places. I was also able to find this YouTube video which has an interview with Sarah Blackwell of the Historic Columbia Foundation. She does an excellent job of describing the tours offered by the group.