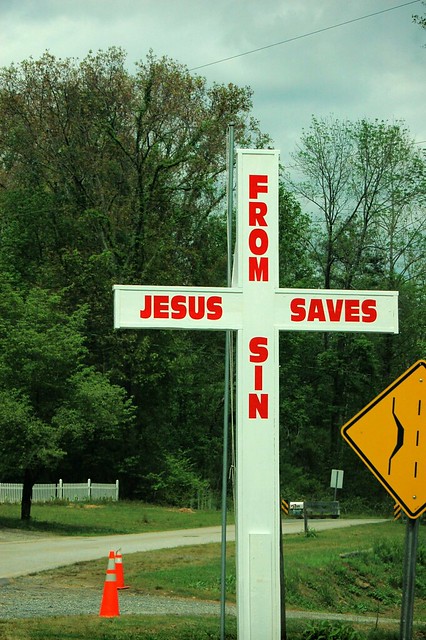 As you drive through several communities in Western North Carolina, you will see wooden crosses dotting the countryside. These crosses are free-standing, about ten feet high, and bear a message, usually something like “Jesus Saves from Sin” or “Jesus Died for Sinners.” These are found in front of Baptist churches in the area, and occasionally in front of private homes. 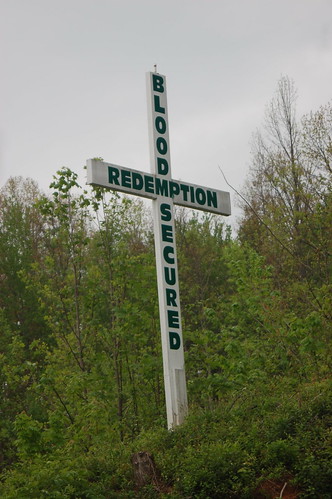 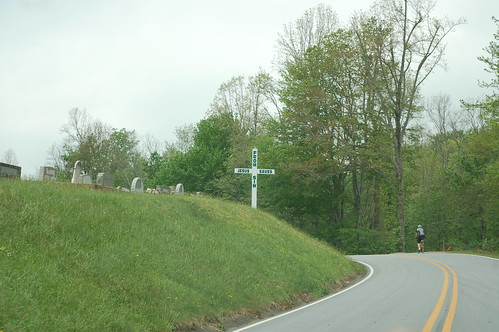 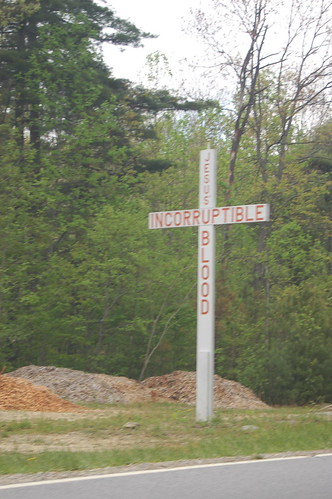 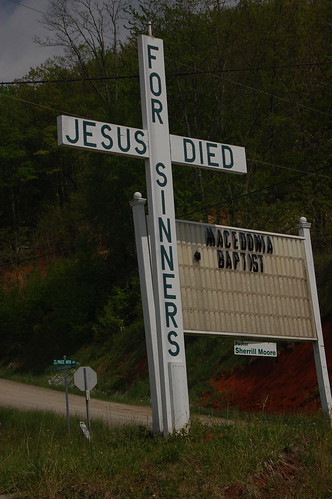 For years I’ve wondered about these crosses. They seem to be limited to the area around the towns of Hendersonville, Flat Rock, Tuxedo, and Saluda. At first I thought they were related to the crosses placed by the late Rev. Harrison Mayes. While his were about the same height, and bore similar messages, his were concrete, and not wood as these North Carolina crosses.

I wanted to know more about these crosses, so I made some inquiries. I called the Carolina Baptist Association, located in the area, and they didn’t know anything about them. Same goes for the Hendersonville Museum, Henderson County Historical Society, Henderson County Library, and Blue Ridge Now, the local newspaper. No one seemed to know anything about these crosses. I even called and left voice mail and sent e-mails to several of the local churches that have these crosses, but never got any response.

Finally I hit pay dirt. Cindy Tuttle with the Saluda Historical Committee had all of the information I needed. She was working on an Images of America book about Saluda history to be published by Acadia Publishing, and it will include information about the crosses.

Here’s the info that Cindy sent via e-mail:

Reverend Henry “Hank” Vegter, pastor of Friendship Baptist Church in Saluda for the past fifty years, has personally installed at least one hundred crosses in North Carolina, South Carolina, Alabama and Tennessee. The first cross was installed at Friendship over twenty years ago. According to Reverend Vegter, who still constructs the crosses today, he does so “as an effective means of revealing Christ and the reality of His salvation.”

I spoke with Rev. Vegter today and he is a delight to speak with. I wanted to ask him how old he is, but did not. He also said he has a shop where the crosses are made out of pressure treated lumber, he paints them and uses “plastic type” letters. He depends on volunteers to help him make and install these. Many individuals ask him to construct them on their private properties in addition to finding potential locations himself.

So, mystery solved. I would imagine that Rev. Vegter is familiar with the Mayes crosses, and probably modeled his on those earlier crosses.

Since I now had a name and a church of origin, I wanted to find out a bit more. Cindy said that Rev. Vegter is a “delight”, and I have no doubt that in person he is. However, from the tiny bit I could find online, he is also a firebrand, and passionate about his brand of Christianity. That’s born out by this photo of the good reverend at a recent Saluda Town Council meeting:

It seems that Rev. Vegter is embroiled in a controversy over a sign ordinance (seems appropriate) in the town of Saluda. The controversy is not over Vegter’s crosses, but over other church signs and a veterans memorial that violated the town’s signs ordinances. Rev. Vegter and several other pastors were not only upset about the signs, but were concerned about various establishments receiving alcohol licenses in town. In addition to appearing at town council, they also held a street preaching event in protest.

Blue Ridge Now and Tryon Daily ran stories about the controversy. Here’s an excerpt from the Tryon Daily Bugle:

Henry Vegter stood with his Bible in hand and asked everyone who is in favor of Christian signs to stand up. Vegter spoke about a group of people in Missouri who founded a town and named it Liberal, where churches were not allowed. He said they boasted it was the only town of its size without priests, preachers, churches, God, Heaven or Hell. Vegter said there was little else but the Devil and Hell there.

“Liberal was a failure,” Vegter said, “and you know Saluda can be a failure the same way.”

It makes sense. A person with a desire to spread the Gospel by planting cross signs across the region would also take a strong stand against those things that go against his beliefs. Rev. Vegter fits the mold of the other two prominent cross planters, Rev. Mayes, and Rev. Bernard Coffindaffer.

In a way, it’s sad to have a mystery solved, but now I know more about this unique regional roadside attraction. My thanks again to Cindy Tuttle for her information, and for clearing up the mystery. I hope her book turns out well.

UPDATE: After my inquiries I was contacted by Amy McGraw, a reporter at Blue Ridge Now. Seems my interest in the crosses stirred up interest at the local paper. I got a call from Amy on Election Day last week, and Friday of that week they published an article on the crosses.