It’s been awhile since I’ve done a restaurant review. Diets and limited income just aren’t conducive to eating out a lot. Even so, a new one caught my eye, and I decided to check it out. Tandem Creperie recently opened this year, right on the Swamp Rabbit Trail.

Last Sunday we had gone on a leaf-peeping drive, and stopped for the first time at The Forest Coffeehouse, down the street. 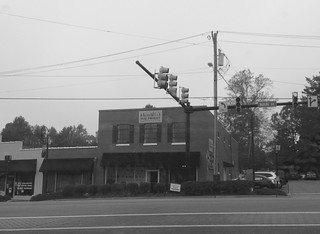 The coffee at The Forest was excellent, and it reminded me of all the new spots in Travelers Rest, and I remembered seeing an article about Tandem. I hadn’t had crepes in ages, so I decided to head up that way.

Brad and Kristen Hartman moved from Oklahoma last year. Earlier this year they started a Kickstarter campaign to raise funding for coffee equipment, and they opened their shop just a couple of months ago.

The cafe is at a major junction of the Swamp Rabbit Trail, where it crosses Main Street. This puts it in a perfect location to take advantage of the Travelers Rest Renaissance. Good friends Joyce and Nancy McCarrell started this Renaissance when they opened the Cafe at Williams Hardware, and soon other eateries such as the American Cafe, Swamp Rabbit Tap Room, and others. Tandem taps into this vibe, offering their own grounds of coffee and hand-made crepes.

Tandem is located in an old brick two-story commercial building right across from Sunrift Adventures. The cafe occupies the ground floor. There is a patio for outside eating, and several tables inside the small inside space. 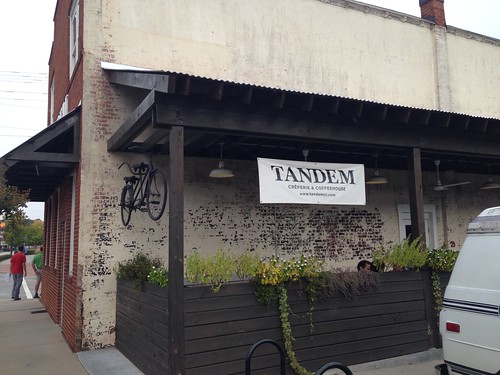 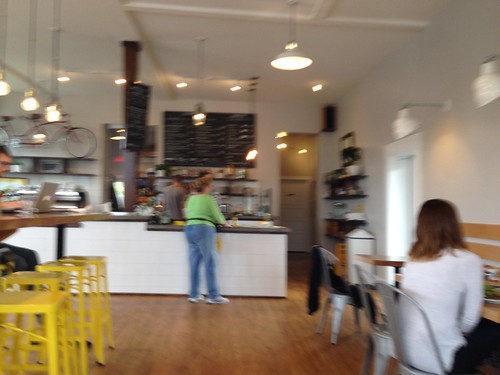 As one might imagine with a name like “Tandem”, there are bicycle-related items on display, including a couple of tandem bicycles. 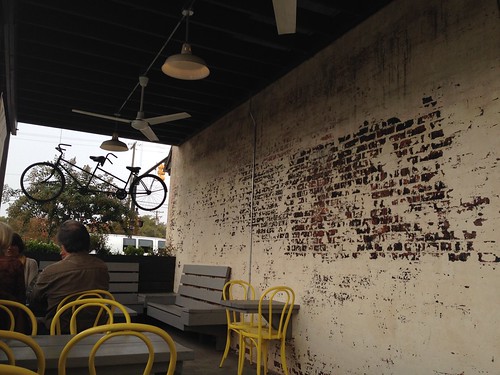 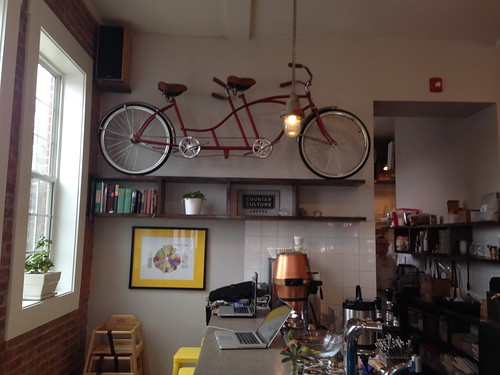 The clientele is a mix of what one might expect – affluent lunch goers, and even a couple of people wearing cycling attire. This doesn’t strike me as a working joe’s lunch stop, but it’s not snooty, either. I could see students hanging out here quite comfortably.

One orders at a counter, and the food is delivered to the tables.  A large chalkboard above the counter lists the menu, and there are paper to-go menus available. 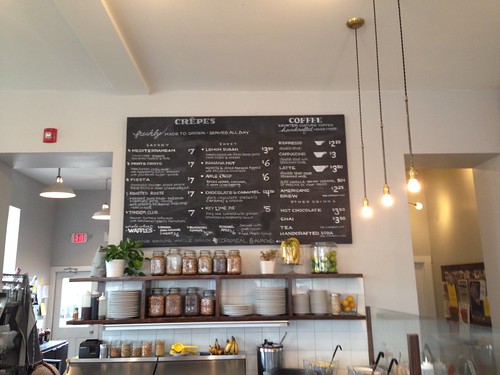 The menu on the chalkboard divides offerings into Crepes and Coffee. The crepe section is further divided into savory and sweet. The savory crepes have a variety of fillings, including spinach, egg, and sundried tomato for the Mediterranean, shredded chicken and black beans for the Fiesta, and eggs and bacon for the Lumberjack. Most of the savory crepes are quite reasonably priced, starting at $7 and running to $8.50 for the specials.

The sweet crepes include apple crisp, banana nut, chocolate, and key lime pie. These hover around the $6 mark.

The coffee selections include batch brewed, pour overs, and the usual espresso drinks. There are also hand crafted sodas and hot teas.

Most of the items look more breakfast related. Since I was there at lunch, I figured one of the savory crepes would be better suited, so I ordered the Fiesta Crepe. Commercial sodas were not to be found, so if I wanted a cold drink, it would have to be one of their handmade sodas. I decided upon the raspberry lime soda. 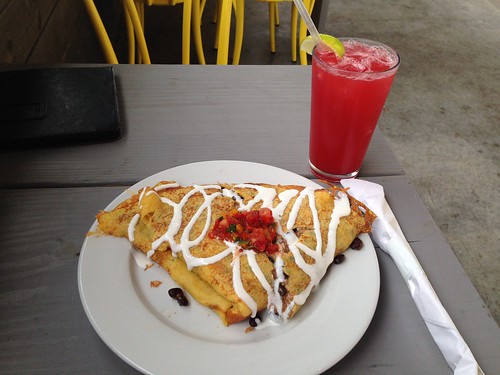 First, the drink…the raspberry lime soda was refreshing. There were little black bits from the raspberries, so you know it used fresh fruit (either that, or it was a clever marketing ploy.) The flavor comes solely from the fruit, so there is more of tang than sweetness to the flavor. It was definitely different from the diet sodas to which I’m accustomed. 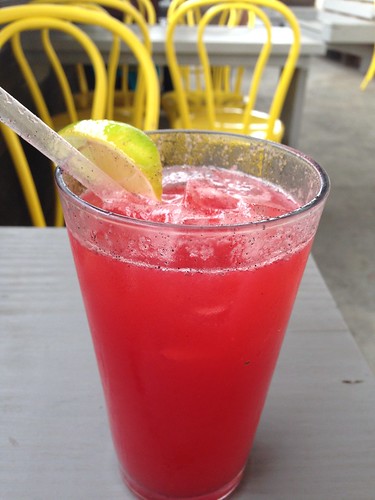 The crepe was made from cornmeal rather than flour, and contained a filling of shredded chicken, refried beans, black beans, and cheese. This was topped with a bit of sour cream and salsa.

The crepe was much heavier than I expected. The shredded chicken was almost lost in the bean mixture, and the interior became somewhat soupy. The cornmeal crepe also seemed a bit heavy. The other problem was the it all seemed a bit salty, which added to the heaviness of the crepe. 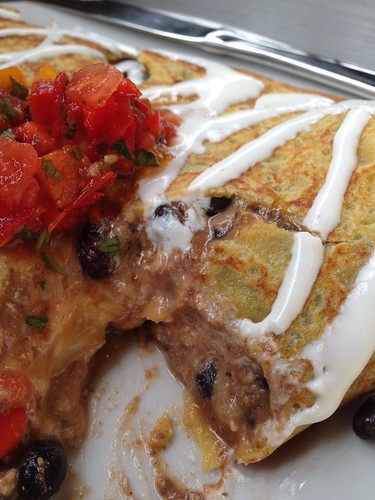 I’ll admit, it was a disappointment. Perhaps if the chicken had been left in larger chunks, or if the bean-cheese mixture had been less salty, it might have worked.

One orders at the counter, and the food is brought out. The food came out quickly and efficiently. The folks were friendly and courteous, and ready to answer my questions. However, this is not necessarily a full-service place, so it’s not really fair to qualify the service as either good or bad.

While my selection was a bit of a disappointment, I’m not ready to dismiss the entire place. I want to come back and try some of the other selections. One of my friends and former coworkers told me that she eats there regularly, and loves everything on the menu. The menu items seem more suited for either breakfast/brunch, or for an afternoon snack. That apple crisp crepe with a cup of coffee looks like it might be a an enticing choice. I may have to break my policy of only doing one review per location and do a follow-up once I’ve tried one of the other items.

UPDATE: As promised, I went back and tried one of the sweet crepes for an afternoon break. Glynda and I headed over there, got a couple of cups of coffee, and an apple crisp. Both the coffee and the crepe were delicious. The crepe was light, as it should be. It was filled with an apple and oatmeal mixture that wasn’t too sweet, and was just right. My initial impression that this is a great breakfast-brunch-snack place, but not as good a lunch place, still holds, until I try one of the other savory crepes and find it to my liking 😉 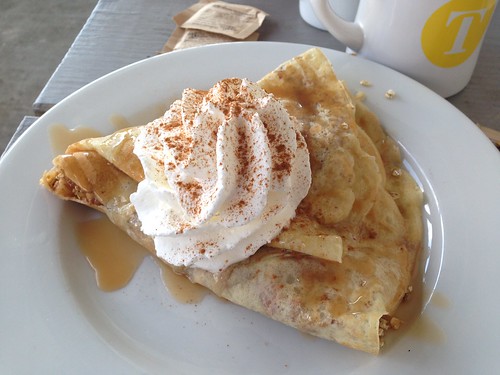 One thought on “Eating in Tandem”