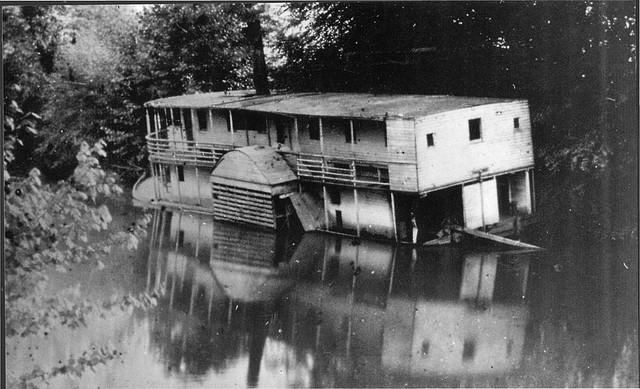 While browsing through the mountain of posts on Reddit I came across a link on the Asheville Subreddit about the “Mountain Lily”, a river boat that once plied the French Broad River between Brevard and Asheville in the 1880s. This was the first time I’d heard of the boat and I wanted to know more about it. That brief post launched me into my first RandomConnections obsessive trek since I got back from Washington. That obsession would involve research, a photo trek, and a river paddling trip. First though, some background about the ill-fated riverboat billed as the “Highest Steamboat in America.”

After the Civil War Col. Sidney Vance Pickens incorporated the French Broad Steamboat Company with a plan to provide service from Brevard to Asheville. In summer of 1881 the Mountain Lily entered service. The boat was a 90 foot long double-decker boat with side-wheel paddles. 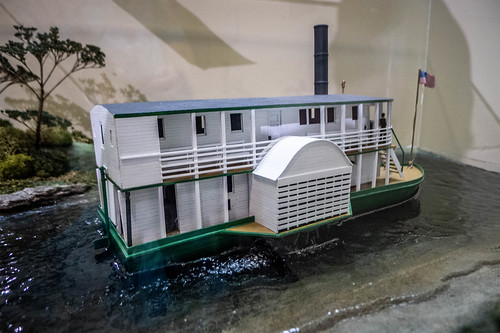 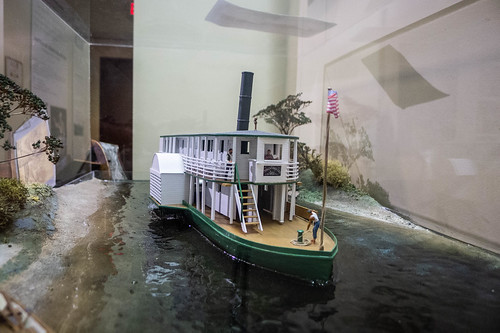 The French Broad River, however, is not very well suited for steamboat traffic. Prior to launch, the river was cleared and jetties were built to clear the route. Even with these changes, the Mountain Lily operated for only a few years and made only a few short trips before it ran aground and was abandoned.

The Mountain Lily sat abandoned near the community of Horse Shoe until the 1930s. Parts were salvaged from the wreck for use in other boats and to build the Riverside Baptist Church nearby.

That’s the TL;DR version. I wanted to know more, though. As usual with these things, I had to sift through conflicting versions of the story, some sensationalized to draw in readers. I was able to nail down some of the details.

First a bit on the French Broad River itself…

I’m quite familiar with the French Broad. I’ve kayaked several stretches, from flatwater to Class V whitewater. When I first heard about the Mountain Lily I wondered how in the world such a boat could operate on those waters. Through this route the French Broad is a narrow, shallow river much like the Saluda or Reedy River in the Piedmont of South Carolina. Even with modifications it would be tricky.

The river heads up in the mountains north and south of the town of Rosman. There two branches come together and flow north to an eventual confluence with the Tennessee River, then on to the Mississippi. The French Broad is thought to be the third oldest river in the world, only behind the Nile and the New River. Both the New and the French Broad predate the Appalachian Mountains through which they flow, which accounts for the unusual direction, north instead of south toward the ocean.

Early settlers identified two large rivers in the region. One they named the English Broad because it flowed south over English held territory. The French Broad flowed north, then west over the then French held territory of the Louisiana Purchase. Eventually the English Broad River was shortened to just the Broad River, which flows from North Carolina across Upstate South Carolina to Columbia where it joins the Saluda to form the Congaree River. The French Broad kept its designation.

As for the Mountain Lily, Congress was just as skeptical of the navigability of the river as I was. Debate raged over appropriations for river improvement with an Ohio Senator saying, “a catfish couldn’t even navigate the French Broad.” In 1876 $25,000 was designated for river improvements. The Army Corp of Engineers blasted shoals and built jetties to channel the water along the route. In 1881 Pickens chartered the French Broad Steamboat Company and on August 2 of that year the Mountain Lily was christened for her maiden voyage.

According to author and historian Terry Ruscin…

Completed by the summer of 1881 and christened the Mountain Lily, the conveyance measured 90 feet long and sported staterooms and two decks to accommodate up to 100 passengers. Painted white with green trim, the riverboat featured two caged paddlewheels. Twin 12-horsepower steam engines drove the wheels.

John Luke Porter (1813–1893), designer of ironclads for the Confederacy, built the Lily. On its maiden voyage on August 2, 1881, the Lily conveyed a band, freight and 100 passengers, mostly friends and colleagues of Pickens.

Pickens’ company proved unsuccessful in ever showing a profit, with the ply never reaching beyond Penrose or King’s Bridge. The French Broad’s shallowness hindered navigation, even after laborious attempts had been made to dredge the less navigable sections. Additional setbacks included unpredictable variations in the river’s flow, extreme drought, low-hung bridges and obstacles presented by logjams, beavers and muskrats. 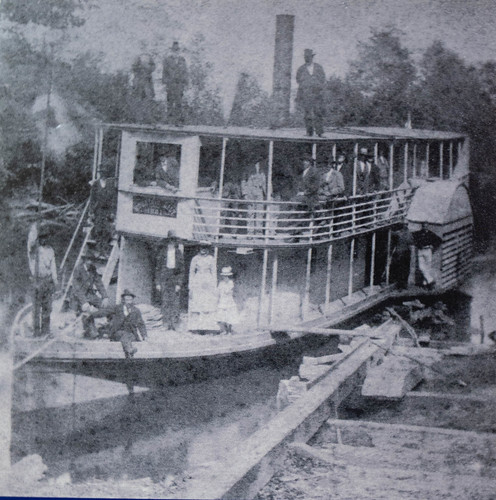 Some of the sources I found said that the Mountain Lily ran aground on her maiden voyage. I think those are the sensational reports meant to sell articles. Regardless, the Mountain Lily only made a very few trips. Most of these were novelties and pleasure cruises, never the regular passenger and cargo traffic Pickens had envisioned. King’s Bridge was too low, so the boat never made it beyond to Asheville, or even to Hendersonville.

I found a few more articles about the brief riverboat service, mostly from the Transylvania Times. One article from November 9, 1939 describes the maiden voyage. 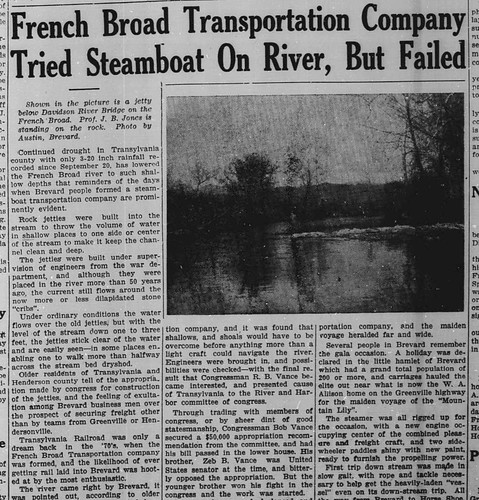 First trip down the stream was made in slow gait, with rope and tackle necessary to helping get the heavily-laden “vessel” even on its down-stream trip. All the way from Brevard to Horse Shoe, however, was made in one day, and many returned to the site next day for the return trip. Again, rope and tackle had to be called upon in more numerous instances to help the Mountain Lily on its hard pull upstream but it finally reached its home port near night of the second day – round trip of 25 miles each way.

Ruscin says that the Mountain Lily only made six trips from 1881 to 1885. This article says that it only made three trips. Regardless, of the number of actually trips, it sounds like travel up the river was difficult.

Third start, however, proved to be the Waterloo for the Mountain Lily, and its prow refused to leave a sandbank near Horse Shoe, despite the churning paddle wheels and the aid of outside pulling. Darkness found the Lily still suck, and a rainstorm in the Upper French Broad added to the damage already done.

Huge logs and other debris piled up against the new sides of Brevard’s first and only steamboat as the slow-moving French Broad carried flood waters down toward the Tennessee Valley, and about the third day, as residents recall the occasion, the Lily folded up and joined the rest of the debris, swirling and eddying along, catching here and yonder until it finally lodged in a huge sandbank five miles below Horse Shoe. 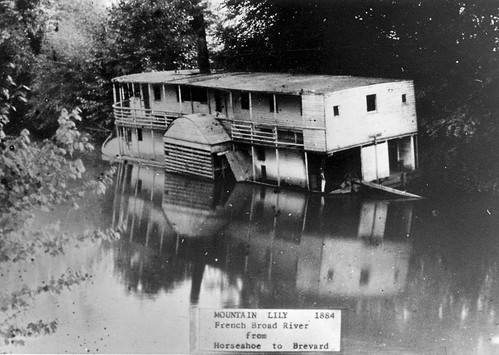 Thus, with a flash flood in 1885, the short life of the Mountain Lily ended. Wood from the hull was scavenged to build Riverside Baptist Church and the ship’s bell was placed in the church’s belfry. Depending on which source you read, the boat’s engines were either used to power a local sawmill, or were repurposed for smaller boats that made a later attempt at river enterprise.

There were several more abortive attempts to carry passengers on the French Broad River. Probably the most infamous was the endeavor by Vardry Mcbee, Jr., son of one of the founding fathers of Greenville, and Sophy Eastman. In 1907 their company, the Black Shoals Company, began a service with a boat much smaller than the Mountain Lilt.

According to an article in the French Broad Hustler on March 7, 1907…

Last Sunday the new steamboat running on the French Broad passed Horse Shoe for the first time. She carried a good load of passenders and made a brave showing as she went up the river. She is about 89-feet long and 20-feet wide…

There is a decided possibility of Asheville men building and operating a steamboat to run from Asheville to Long Shoals. Passengers will then be transferred around the shoals, a distance of a few hundred feet, and re-embark on the boat now running…

This time, though, it wasn’t the river, but scandal that brought down enterprise. Sophy Eastman was twice divorced and was living with the much younger McBee as an unmarried woman. They had a falling out and Eastman sued McBee for fraud. McBee, in turn, sued Eastman for abuse. He was able to get her arrested for violating a state law that says that unmarried men and women could not co-habitate, even though he was part of that couple. Eastman quickly married her beau of the moment to avoid prosecution and McBee became a railroad superintendent in Columbia, SC.

And it was the railroad that put the last nail in the coffin of commercial traffic on the French Broad. With the coming of the railroad to Brevard and Hendersonville boat traffic was no longer necessary or cost effective.

So that’s the background. Based on this information I had several places in Henderson and Transylvania Counties to explore. I wanted to visited the Henderson County Museum where they had a model of the Mountain Lily and I wanted to visit Riverside Baptist Church, now known as Horse Shoe First Baptist. I also wanted to scout sections of the French Broad mentioned in my resources. I created a Google Map to help me with my planning.

For more information, check out these links: 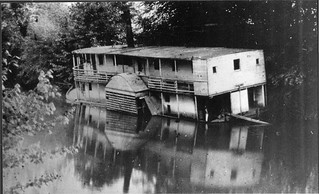 One thought on “Searching for the Mountain Lily – Part 1, History”