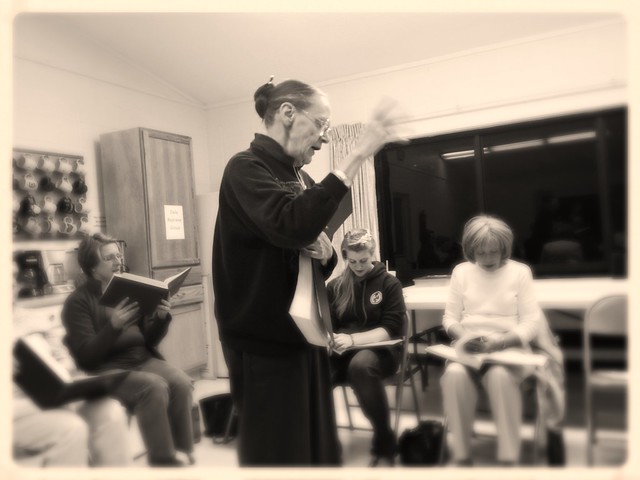 Each month a Sacred Harp singing is held just around the corner from my house at the First Christian Church. The singing takes place on “the Friday before the third Sunday of each month,” using the parlance of singing organizers. This singing has been going on since the 1990s, and as close as it is to where I live, I’d never attended. I decided that needed to change, so this past Friday night I decided to pay them a visit.

It had been a long time since I’d participated in a singing. I think the last one I did was the William Walker Memorial Singing in Spartanburg way back in 2009. I’ve always seemed to have conflicts with the big singing days, usually a paddling trip with my friends. I had planned to do a podcast episode on shape note singing, so I knew I wanted to take part in another one soon.

Apart from proximity, one other incident was a catalyst for my visiting this particular singing. When I was interviewing David Gillespie for The Stone Carvers podcast, he said that he participates in something else that might be of interest to me. He then reached around to a shelf and pulled out a copy of the 1991 Denison edition of The Sacred Harp. David said that he attends the Greenville singings on a regular basis. That kind of sealed it for me.

I confirmed the time and date with Dave Farmer, a fellow Chorale member who participates in the singings. Dave also confirmed that this group only sings from the Sacred Harp. Some groups use only William Walker’s Southern Harmony, and some sing from both books. Other groups use other less popular singing school books such as the Columbia Harmony. But, for this night it would only be Sacred Harp.

I dug out my own 1991 Denison edition and arrived at the appointed time to find the group set up in the fellowship hall in the traditional “hollow square” formation. It was going to be a small group, with only one row set up for each part. There were loaner books available, but most had their own copy. I took a seat with the basses next to Dave Farmer. Robert Kelley, whom I’ve met at several other singings and who had already agreed to contribute to my upcoming podcast, sat on my right with the tenors. In all, eleven people showed up for this evening’s singing. 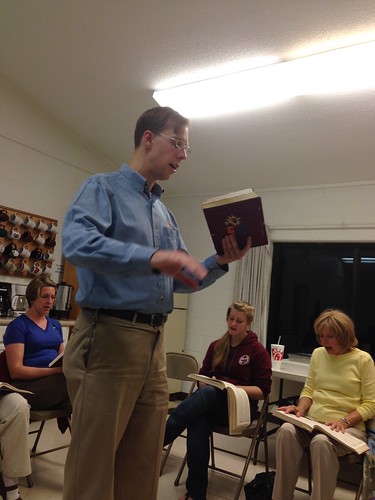 The hardest part for me is singing the song through once on the fa-so-la syllables. I can sight read music extremely well, but I struggle with this. By the end of the evening I was getting the hang of it, but I was glad we were singing from The Sacred Harp, which only uses four shapes, as opposed to The Southern Harmony, which uses seven. Most of the time I would somehow fake it until we got past that, then singing with the words wasn’t as much of a problem.

Most of the songs selected were unfamiliar to me. Some I really liked, and I tried to mark them with sticky notes I’d brought along. I marked quite a few over the course of the evening. 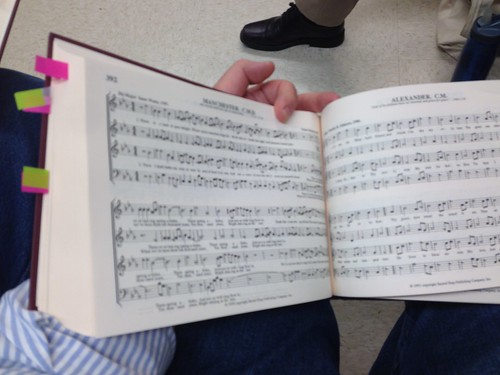 The first time leadership rolled around to me I took a pass. I don’t know these tunes like the other participants, so I couldn’t just jump to my favorite on a moment’s notice. It took me awhile to find one I thought I could do, and I had to do that in between rapid-fire selections from the others. Even so, when my time came around again, I tried to lead, but it was a total train wreck.

I’m a trained choral conductor, and it’s hard to unlearn all of those skills when I stand in front of a group of shape note singers. The up and down movement of the arms to keep time is totally different from a conducting pattern. Combine that with my lack of skill with the syllables, and the fact that the tune was NOT the one I thought it was, and I found myself fumbling along, following the more experienced singers rather than doing an actual leading. Embarrassed, I made it through the piece, happy to relinquish the leader spot to someone else. Fortunately, I got better as the evening progressed.

The group sang for two solid hours, from 7:00 until 9:00 without any break. I recorded the entire event. I haven’t listened to all of the audio, but I think it turned out well. Dave Farmer had actually given the group a heads up that I would be there with the recorders, and they were fine with it.

When I got home and played a bit for Laura her involuntary reaction was to turn up her nose. In fairness, that was my initial reaction to shape note music. As a trained singer accustomed to pure tones and perfect blending, to me the sound was too jarring. It’s an acquired taste, but once you catch on it can be very compelling.

Another thing to bear in mind is that it’s meant to be participatory and not passive. It is a completely different experience when you’re singing with the group. In fact, a place for an audience isn’t even a consideration in most singing venues.

Someone looking at one of these singing books might think that it’s just a different looking hymnal with weird shaped notes. There are other significant differences, though.

These three differences create a haunting, other-worldly sound, especially in songs in a minor key. Here’s just a sample from the evening on one of my favorites. This was Sons of Sorrow, and the text would fit perfectly with one of my cemetery podcasts. I may yet use it in one.

There are other differences, such as the strict timing, polyphonic “fuguing tunes,” and use of “relative” keys rather than absolute pitches.  For example, a song written in E minor might be sung on any pitch to which the group agrees.  Pitch pipes are unheard of at these singings.

Even though I was a novice, the folks were friendly and forgiving. I had a blast, and want to come back. The next major singing is in Daniel Recital Hall at Furman on the morning of Saturday, May 9. That’s also graduation day at Furman, so there will be lots happening. The next singing at the First Christian Church is May 15, if I understand their system correctly. I’m going to try to find a way to get back to another one soon.

One thought on “Sacred Harp in Greenville”