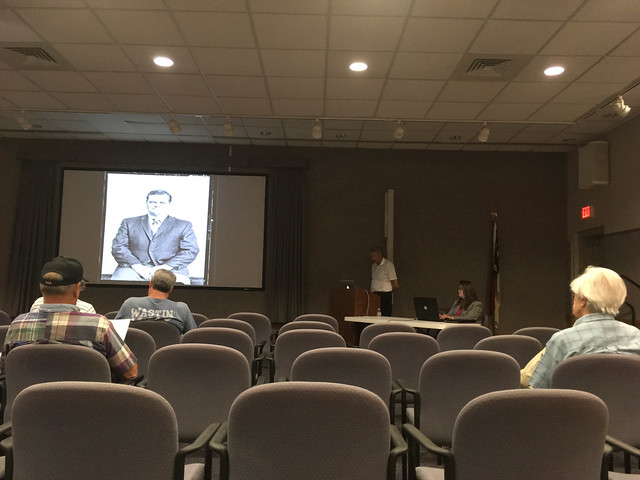 I was at the Henderson County Library doing some research on The Kingdom of Happy Land. As I was leaving I passed by the library’s auditorium and noticed folks gathering for some sort of presentation. Having just given a talk at a library myself, I was curious. As I glanced at one of the flyers a man at the door said that it was a meeting about photo identification. I decided to check it out.

The meeting was sponsored by the Community Foundation of Henderson County. The late Joseph “Jody” Egerton Barber donated more than 60,000 historic photographs to the foundation, to be maintained by the Henderson County Library. The photos range from 1884 to mid-1990s.

Ron Partin, a volunteer with CFHC, has been working to scan and catalog the images. For the past three years Ron has been holding public meetings on the first and third Thursday of the month to help identify some of the individuals in the photographs. Each meeting features a slideshow of images, and the public is invited to comment on the photo or identify faces or places that they recognize. Participants are given a handout that lists the photos for that day’s meeting which includes the subject matter and any other information they have about the photo. 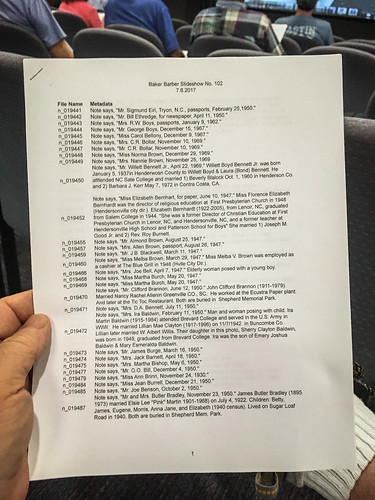 It was fascinating watching this exchange. The group was small, about 18 participants. Most were older, and most seemed to be long-time residents of Henderson County. That makes sense. You would want someone with a long history in the area to help identify the photos. The meeting was fairly informal, with the audience willingly contributing and commenting. As comments were made, a volunteer from the library recorded the photo spreadsheet with the additional information.

A photo featured several school-aged children from the 1940s or 50s. One old-timer identified one of the kids and rattled off a phone number where he could now be reached. Ron asked how he could remember that, and the guy said, “He kept calling me about growing marijuana.” 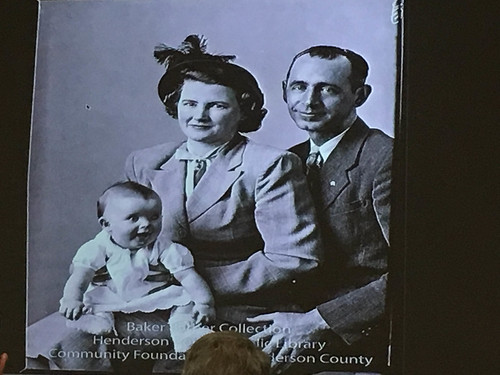 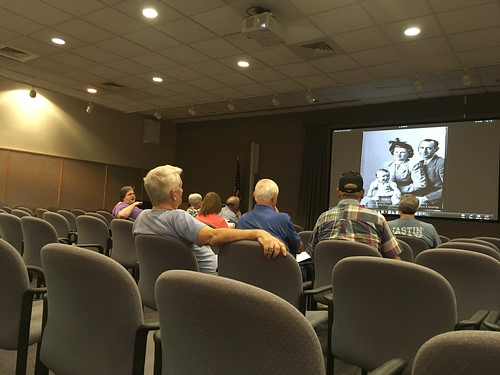 As the photos were shown Ron would occasionally zoom in to reveal details – a lapel pin, piece of jewelry, text on a sign or in the background, diplomas, or anything else that might help with identification. One audience member identified a 1939 Oldsmobile, helping to establish the date of the image. Another said that the date given for a photo of a baseball team was incorrect, as the style of gloves used by the players was much too old. 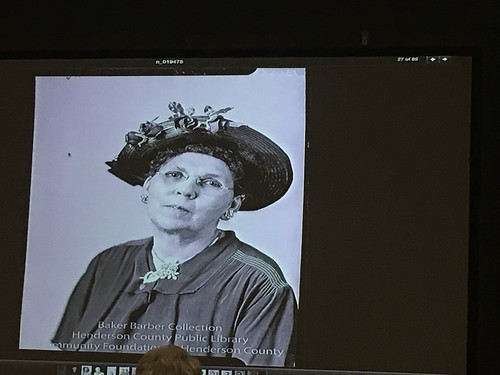 Even though I really had no connection to these photos, I found the process intriguing. I love this type of photo detective work, and even developed a similar activity based on historic photos for students. This sort of crowd-sourcing is an excellent way to help identify old photos.

There is a Flickr account set up for the Baker-Barber Collection. The account looks like it is active, although it now only has 205 photos available. Each photo has a description and any available information. The public can make comments on these photos, as well, which is another way of crowd-sourcing the photo identification process.

I didn’t stay for the entire presentation. I had parked in a 2-hour space and wasn’t sure how much time I had left. Also, I needed to get back to Greenville and it looked like I’d be driving through some afternoon storms. I was glad I stumbled onto this meeting, though, and was glad that I stuck around to see what was happening. I wish Ron and the CFHC luck in completing their photo identification process, and I look forward to seeing more of the photos online. 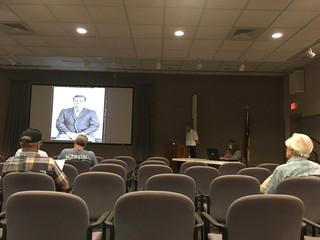 One thought on “Photo ID at Henderson County Library”