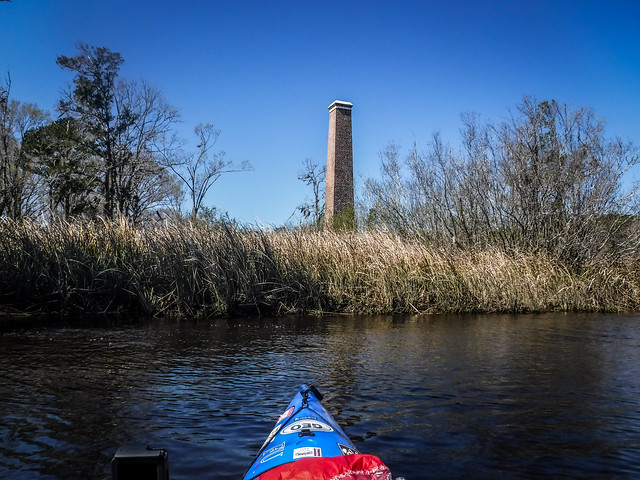 NOTE: I am way behind in posting. This trip took place back in March prior to the Coronavirus lockdown and I’m just now getting around to the write-up.

Our Second Saturday paddle for March turned out to be the First Saturday this year. With all of the Coronavirus scare, that was probably a good thing (though kayaking is an excellent way to socially distance). For this trip we decided to check out a new stretch of the Edisto River. We would put in on Penny Creek and take out at the historic Willtown Bluff. Along the way we would see the remains of old rice plantations and some beautiful scenery.

We have slowly been filling in the gaps on our exploration of the Edisto River. This would cover another huge chunk of the map and show us some parts of the river we had not yet seen. This section of the Edisto runs through the ACE Basic and is close enough to the coast to come under tidal influences.

As I was studying the map and Google Earth I came across an anomaly. This area is dotted with old rice plantations. At the edge of one such plantation I spotted what looked like a monument, possibly an obelisk. I marked the location and added to my GPS, along with put-in and take-out, confluence, and other important points.

I headed down to Hardeeville the night before so that I could get an early start. Our meeting place was at the Willtown Landing on the Edisto. Alan arrived not long after I did. It was sunny, but a bit chilly and breezy. Fortunately, it looked like the wind would be at our backs.

We got a call that our other paddlers were at the put-in on Penny Creek. We loaded Alan’s boat onto my car and left his at the take-out. There we met Matt, James, and the other Alan. Five of us would be on this trip.

Penny Creek was another tree-lined and similar to many low-country waterways we had paddled.

Not far from the launch we found an old boat abandoned in the waterway.

Fortunately, on this narrow creek we were sheltered from the wind.

Soon the trees thinned out and we entered the rice fields. Channels opened to the right and left. We entered one narrow tree-lined channel, but downed trees wouldn’t let us go far.

Soon we reached the main stem of the Edisto. Here it’s much wider than the upstream sections we’ve paddled. The wind was brisk, but fortunately it was at our backs.

As it turns out, the structure was the chimney from an old rice mill.

Here is an image of another lowcountry rice mill with the chimney intact.

The channel ended in a sheltered cove. We decided it was the perfect place for a lunch stop. There we found other remnants of the mill and got a close-up view of the chimney. On Google Earth it looked like this was part of the old Hope Plantation. James had brought along a drone, which he used to get aerial shots of the location.

And, of course, there were brats and sauerkraut, cooked on The Most Photographed Stove in South Carolina™. This was washed down with a bit of good bourbon and some beer.

As we paddled back out toward the Edisto there were several impoundment channels leading into the old rice fields. We wanted to explore some of those, but were unable to get into them. Back out on the main channel the wind was brisk, but still in our favor. I decided to deploy my sail and cruise along with the current.

After cruising along like this we spotted another major channel opening to the south and decided to explore a bit more. This took us on the back side of Prospect Hill Island and along Hope Creek. The island had been part of a rice plantation, and there was still a private ferry across the creek to the island.

Back out on the Edisto we spotted two more rice mill chimneys in the distance. I was only able to get a good shot of one of them.

Soon we were approaching Willtown Bluff and the end of our trip. This high ridge overlooking the Edisto was the site of an early settlement in the 1700s known as New London.

We reached the landing, but Matt decided to linger a bit longer and explore an exposed sand bar. There he found some ceramic remnants and other interesting articles. I was wishing I had joined him with my metal detector.

We had traveled nearly nine miles along the Edisto, but with the wind and current it seemed to go quickly. Here’s the GPS track along with a time-lapse of the trip.

We took Alan’s vehicle back to retrieve our cars, loaded up, then sought out some post-paddling refreshment. This was found at the ACE Basin Fish Camp on Highway 17. It was a great end to a great day of paddling.