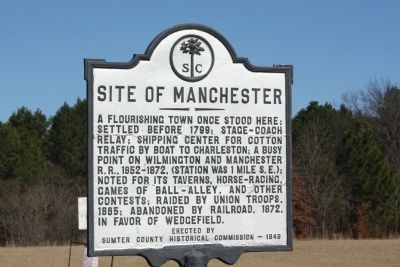 In other words, junk had been dumped on the location at some point. We kept moving.

The final stop for the day was Poinsett State Park. The park is the site of an old rice plantation, and many of the structures were built by the CCC in the 1930s. We stopped at the park office to relax a couple of minutes. One of the main attractions is a raceway from the Old Levi Mill Pond down to the site of the old mill. The water drops dramatically through the raceway, and is a great spot for photography. Once again, we all jockeyed to get the same shot. At this point Upcountry and Lowcountry diverged. We said goodbye to our friends from the lower part of the state, and headed northward. However, we had one more planned stop.

Stateburg and the Church of the Holy Cross

Just north of Garner’s Ferry Road is the location of another ghost town, Stateburg, and the Church of the Holy Cross. We stopped at the church to check out the architecture and historic cemetery. The church contains the grave of Joel Poinsett, famous South Carolina statesman who loaned his name to many buildings and roads in Greenville, including the Poinsett Hotel and Poinsett Highway. Most famously, though, he brought back a flowering plant from Mexico, which was given the name poinsettia. There were also many relatives of Thomas Sumter, as well as a few signed headstones. By this time we were all worn out. We headed back to Columbia to drop off Dwight, but first there was dinner. We stopped at Big T’s BBQ, an amazing source of fuel in the form of chopped pig. Our first outing of 2013 with Lowcountry Unfiltered was epic, I hope was just a taste of things to come for the year. Here are all of the photos from the day…

…and a map of our adventures.