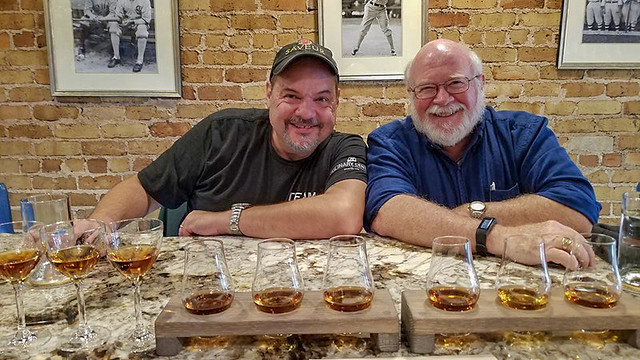 This particular Friday was turning out to be a fun, yet busy day.  Already I’d reconnected with an old friend at the Carolina Music Museum and had been able to play some fantastic vintage keyboard instruments.  Now I was on my way to meet my friend Jeff Bannister for an informal and over-the-top bourbon tasting downtown.

Jeff Bannister is a local celebrity chef.  A former law enforcement officer and private investigator, Jeff made his name by cooking whole animals for his Bovinoche events.  Jeff has appeared on seventeen national television shows, including “Fat Guys in the Woods” and the Food Network’s “Chopped.”  I got to know Jeff through kayaking.  Given his extensive inside knowledge of Greenville’s restaurants, of course I’d jump at the chance to join him for lunch and a bourbon tasting.

I arrived at Grill Marks on Main Street and got a table.  Jeff arrived soon afterwards.  I had been here only once several years ago, grabbing a quick burger after a Chorale rehearsal at the Peace Center.  I hadn’t been terribly impressed at that time.  That was about to change.

At that first visit we sat in the outdoor area next to the street.  I honestly can’t remember if I had been inside.  I thought about sitting at the bar, but opted for a table this time.

Ostensibly we were here for lunch, but the real reason we were here was because Grill Marks had released a new Bourbon Menu which offered flights for tasting.  Jeff and I ordered two flights which covered everything on that menu.  One flight had four bourbons and the second had two beers and two wines that had been aged in bourbon barrels.

With all of this alcohol we needed some cushion.  Jeff ordered sliders and I got the “Cafe au Poivre” burger, a variation on my favorite mushroom and Swiss, but with au Poivre sauce.

My burger was absolutely fantastic and considerably raised my opinion of Grill Marks’ food.

We made our way through our drink selections, tasting each then nibbling one of my French fries as a palate cleanser.  Some, like the Blade and Bow, had a distinct bite.  Others, like the Woodford, were very smooth, similar to a Blanton’s.  The wines and beer had distinctive flavors, but our preference was for the bourbons.  Sampling these was an excellent way to determine which we liked and which we would just as soon leave alone.

When Jeff made his comment on Facebook about the bourbon flights one of his restauranteur friends said he should come down and try theirs.  Since neither of us had pressing engagements that afternoon we decided to follow-up our bourbon with even more bourbon.

Husk is one of the newer restaurants in town, located in the West End on Pendleton Street near the baseball stadium.  The original Husk opened in Charleston, but there are now also locations in Savannah and Nashville.  The restaurant specializes in Southern cuisine.

We were here for bourbon, though.  We took a seat at the bar and Jeff introduced me to Regan, whom he said was best bartender in town.  I filed that information away for future reference for when I want to try some good classic cocktails.

Bourbon seems to be the bar’s focus…

An on-site cocktail apothecary program gives the impressive bar team a cadre of housemade ingredients to make some of the most delicious drinks in the Upcountry while highlighting spirits from artisan distilleries in South Carolina like Six & Twenty, High Wire, and Charleston Distilling. Beyond the bourbon-focus that’s become synonymous with Husk Greenville’s bar program, patrons can sip artisanal microbrews from Birds Fly South, Quest, Brewery 85, and other Southern craft breweries. It’s a place to relax, have a drink before dinner, and always a discovery of new tastes derived from old virtues.

Even so, Husk doesn’t really have flights on the menu, but Regan was willing to create some for us.  And create them he did!  We were brought nine samples of various bourbons.

We tried to do a blind taste test.  Regan created a cheat sheet for us that we could flip over if we needed.  It got flipped over rather early on, as we were woefully incompetent when it came to identifying the various brands.

There were some clear distinctions, though.  There were variations in color, depending on how long and in which barrels the bourbon had been aged.

In some I got overtones of vanilla or fruit.  One had a distinct flavor of sherry.  Others had a smoky finish that would go well with a fine cigar.  The Woodford Reserve continued to be one of my favorites, with nice flavor and a smooth start and finish.

Our least favorite of the bunch was also the most expensive per bottle.  The Belle Meade Madeira had a harsh bite at the beginning as well as at the end. At $90 per 750ml we decided that was one we could mark off our list.  We didn’t even finish the sample.

Between the two of us and two restaurants we sampled thirteen different bourbons, two wines, and two beers.  These were small tastes, but it was still more than I imbibe on a typical afternoon. When I got home I hit the couch and conked out until time for dinner.

It was a great experience and I learned quite a bit about which bourbons I like.  I have Blanton’s and Makers Mark at home and I can tell those apart easily.  I’ll have to pick up a small bottle of Woodford Reserve to see how it compares with those.  My deepest thanks to Jeff for letting me crash his bourbon party, for his expertise, and for the great stories we shared through the course of the afternoon.