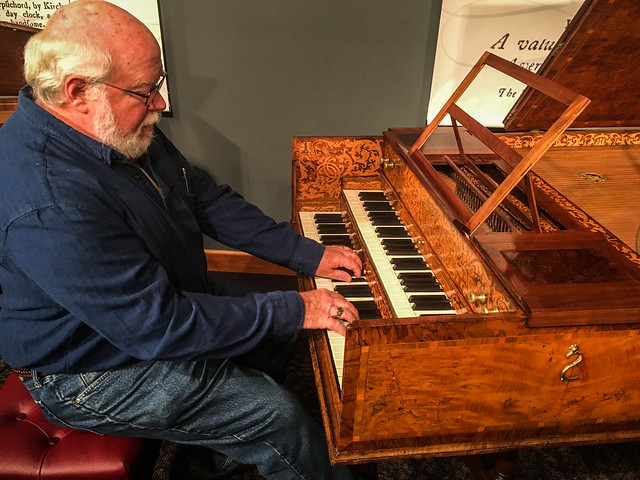 It started with a casual comment by my friend Jeff Bannister on Facebook.  He said that Grill Marks restaurant in downtown Greenville was now featuring bourbon flights.  I thought it would be a great way to educate myself about bourbon, so I invited myself along.  The day turned into a bourbon and music adventure, starting with a visit to the Carolina Music Museum, heading to two restaurants with fifteen bourbons, two wines and two beers, and ending with repentance by singing Sacred Harp music that evening.  It was quite the day.

Jeff and I were to meet at noon, so that gave me the morning to explore.  I decided to head over to Heritage Green and check out the Carolina Music Museum.  The museum opens at 10:00 and I arrived just as a busload of kids were heading into the building.  I decided to wait a bit and headed into the Upcountry History Museum instead.  Turns out it was full of school kids on a field trip, too.  I browsed the lower level then decided to just head on over to the music museum.

The Carolina Music Museum opened in the old Coca-Cola Building on Heritage Green while we were in Washington last year.  It replaces the Bob Jones Art Museum, which had previously occupied that space.  The museum houses the collection of Dr. Thomas Strange, a physicist and antique keyboard collector/restorer.  Yeah, Doctor Strange.

At the entrance to the museum there was a small harpsichord built Tom Strange in 1980 with a sign that said “Play me.”  I did.  I played a couple of Bach Inventions and some excerpts from some Clementi Sonatinas.

The field trip was wrapping up downstairs so I chatted with the docent (whose name I cannot remember) and paid my entrance fee.  As we spoke Dr. Strange entered.  She said that I might be able to meet him.  I headed on in to the main floor.  There I found a stunning array of keyboard instruments, from harpsichords to early pianos.

Some of these were roped off but others were not.  Thinking about the Flemish-styled harpsichord in the entrance, I asked if they allowed visitors to play them.  The docent said that usually they don’t, but that the museum’s executive director might make allowances.    She also said that the director loved to tell stories about the instruments and that she would see if he was busy.  I was looking forward to meeting Dr. Strange, so I browsed the displays while she went in search of the director.

Much to my surprise and delight, the executive director was not Dr. Strange, but my old friend Dr. Roy Fluhrer.  Roy had been the director of the Fine Arts Center in Greenville.  I met him in the early 1990s.  His background is in theater and he was the director of a performance of Gilbert and Sullivan’s The Mikado.  I sang the title role of the Mikado with the Greenville Savoyards and we performed in Gunter Theater at the Peace Center.  Roy and I interacted in various capacities over the years, but I’d lost touch with him.

Roy invited me back to his office and we caught up.   He had retired from the school system, but when Tom Strange started planning for his new museum he asked Roy to be its director.  Strange is listed as the artistic director.

Roy took my on an extensive tour of the museum, starting with harpsichords built by Jacobus Kirckman.

A harpsichord’s strings are plucked and there is no way to vary dynamics.  The dual keyboard setup was meant as a solution.  The upper keyboard is a bit more muted than the lower, giving a dynamic variation.

Roy invited me to play the two-keyboard harpsichord.  I played the little bit of Bach I knew from memory.

From the harpsichords we moved on to early pianofortes.  I was particularly fascinated with the pedal configurations on some of these early pianos.

One of the most unusual of these pianos had five pedals.  In addition to the typical mute and sustain it had what is known as a “Janissary” pedal.  This pedal would play some sort of percussion, in this case bells, reminiscent of a Turkish Band.

Mozart wrote his Rondo a la Turk specifically for a piano of this time.  The video below shows Jerry Anderson playing the Mozart piece on this piano.

Roy let me play this piano, which I did rather poorly.  I hope Muzio Clementi will forgive me for butchering his minuet.

There were a couple of Broadwood pianos.  One was from the time of Beethoven, and one had actually been played by Frederic Chopin.  Roy let me play the Chopin piano.  It seemed only right to play Chopin’s Waltz in C-Sharp Minor.

All of these pianos sounded quite delicate, much lighter than a modern piano.  That’s because the tuning pegs were mounted in wood rather than iron, so they couldn’t support the incredible tensions placed on modern piano strings.

One piano in the middle of the display floor was a stunning early piano, and one of the first to start incorporating iron into the casing.  The burl wood was amazing.  The piano also had slide-out pieces on either side of the music stand that would support a candle.  I didn’t get to play that one.

Roy and headed upstairs where they had examples of 19th Century spinet and square pianos.  Some of these were massive and some were quite light.  There was one that was even a hybrid piano and pump organ.

I was running out of time and Roy had appointments to keep, so we said our goodbyes.  Roy said that the museum has frequent concerts and other events, and that in a couple of months they would been adding a collection of brass instruments to their displays.

My day was just getting started, though.  From Heritage Green I headed downtown to make my rendezvous with Jeff.