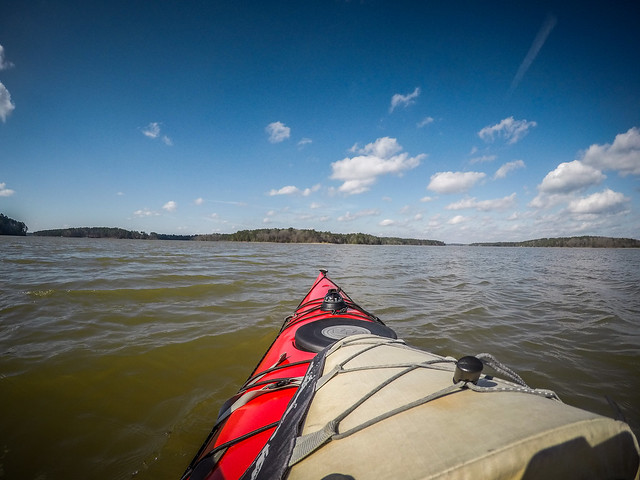 Early settlers seemed to have a fascination with reusing old names. The US is full of place names with the word “New” appended. In some places they didn’t even bother with the “New.” This longing for a hint of European homeland was the case with several of the ghost towns along the Savannah River – Hamburg, South Hampton Lisbon, Petersburg, New Bordeaux, and Vienna. On this unseasonably warm February day I decided to paddle out and see if I could find any remnants of the tri-city area of Lisbon, Petersburg, and Vienna, now located under Lake Strom Thurmond.

Setting the Stage – The Towns

The towns of Petersburg, Lisbon, and Vienna once occupied the confluence of the Broad and Savannah Rivers. Petersburg and Lisbon were on the Georgia side and Vienna on the South Carolina side. This was once an area of thriving commerce, at a time when river travel was the best mode of transportation for merchandise. Ferries connected the three towns, which each had their own unique character and industry.

Petersburg was the largest of the three towns, and at one time it was either the third-largest or second-largest city in Georgia, depending on which resource you read. Regardless, it was a bustling place with cobblestone paved streets, stores, theaters, and an active social scene. Two US senators hail from Petersburg.

The town started as a Scots-Irish settlement initially named Dartmouth. In 1786 one of the settlers, Dionysius Oliver, built a tobacco inspection warehouse at the confluence of the Broad and Savannah Rivers. The location was ideal for transporting product from Upstate farms down to Augusta and Savannah. Oliver drew up a city platt around his warehouse and named his new town Petersburg after his birth place in Virginia.

According to the New Georgia Encyclopedia…

The idea of a tobacco warehouse blossomed into a plan to construct an entire town on the small peninsula. Named for the place of Oliver’s birth in Virginia, Petersburg was divided into eighty-six lots of one-half acre each, and Oliver was immediately besieged with buyers. Speculation drove lot prices to high levels, and the town’s population began to swell. By 1800 it was estimated that Petersburg had a population of approximately 750 permanent inhabitants. The time of its greatest prosperity was from the 1790s until about 1810. During its boom years, Petersburg attained many facilities essential to a town of its stature, including a post office, which began service in 1795; a newspaper (the Georgia and Carolina Gazette), which began publication in 1805; several mercantile firms and businesses; a number of taverns; a town hall; and a jail. In addition to a number of residences, Petersburg also boasted a cabinet shop, a tailor shop, a seamstress shop, horse stables, a church, a few schools, and tobacco warehouses.

There was plenty of social entertainment in Petersburg, including plays, balls, promenades, picnics, and community celebrations. The upper class was well represented in the town, and among its residents were doctors, lawyers, and politicians. Petersburg also has the distinguished honor of being the only town in the nation’s history to produce two U.S. senators, William Bibb and Charles Tait, who served at the same time. Petersburg and the Broad River valley also loomed as a crucial arena for the development of political alignments in Georgia’s history during the early national period, especially between factions claiming Virginian ancestry and those linked to North Carolina families.

To the south of Petersburg on the other side of the Broad River was the tiny town of Lisbon. This town was laid out in 1786 by Zachariah Lamar at about the same time as Petersburg, but it never attained the same status.

Vienna, on the South Carolina side of the Savannah River, was not as large as Petersburg, but larger than Lisbon. Vienna also had tobacco warehouses, but was more well-known as a lumber town. It’s greatest claim to fame, though, was as the home of Dr. Moses Waddel and the original Willington Academy, then known as the Vienna Academy, established in 1801. Waddell went on to become the fifth president of the University of Georgia.

The three town thrived…for awhile. They competed for commerce and for reputation. Augustus Longstreet described the towns thusly after a visit to the Willington Academy…

The reader will naturally enquire where the immense throng which attended Dr. Waddel’s exhibitions found accommodation. We answer, at all the houses within six or seven miles of Willington, and at the four villages of Lisbon, Petersburg, Vienna, and Richmond. The three first were tolerably thrifty little villages at the time of which we are speaking. Petersburg was quite an active, busy, commercial little town. It was situated in the fork of the Savannah and Broad Rivers, and contained some eight or ten stores, with the usual supplement of grog shops, and the very unusual supplement of a billiard-table. Notwithstanding these last, the citizens of the place were generally remarkable for their refinement, respectability, intelligence and hospitality. The dwelling houses far outnumbered the stores and shops. It was separated from Lisbon by Broad River, and from Vienna by the Savannah. Lisbon we believe could never boast of more than two stores and a groggery, and as many dwellings. Vienna surpassed Lisbon in everything, but exactly how far, and in what we are not able to say, except in John Glover’s house and store, which had no match in Lisbon. The road leading to Willington from Vienna ascended a hill, about a mile from the latter place, which was crowned with Richmond. This town was very compactly built. It consisted of one dwelling house, one doctor’s shop, one kitchen, one stable, one corn-crib, and one smoke-house.

Augustus Baldwin Longstreet – Master William Mitten: or, A Youth of Brilliant Talents, Who Was Ruined by Bad Luck:

Tobacco, cotton, and other goods were shipped back and forth along the Savannah River on “Petersburg Boats”, flat-bottomed pole boats specifically designed to navigate the river.

An 1893 article on the Edgefield Advertiser described water traffic along the Savannah River in the early 1800s, with information taken mostly from Robert Mill’s “History of South Carolina.”

The principal navigable stream is Savannah River, which forms the southwestern boundary of the district. It is navigable from Hamburg to Charleston of steam-boats of from 120 to 300 tons burden. A voyage from the former to the latter and back again, is made with ease in 12 or 15 days. From Hamburg above, to Petersburg in Georgia, and Vienna in South Carolina, this river now affords a navigation for boats carrying from 40 to 50 bags of cotton; indeed the navigation is practicable much higher up for boats of a similar border, by the removal of a few obstructions, occasioned by shoals and rocks. When these are taken away, the navigation of this fine river can be extended up to the mountains.

Yet, this 1893 article was published long after the towns had died out. Cotton replaced tobacco as the primary crop for the region. Railroads began to replace river traffic. With its unique location on a peninsula, it wasn’t economical to built the tracks out to Petersburg. There was also western migration, flooding, and an epidemic of Yellow Fever. By 1844 the post office in Petersburg was closed and moved to Lisbon. By the time of the Civil War all three towns had pretty much closed up.

An 1851 article in the New York Times was one of the last references to Vienna, describing a non-fatal pistol duel. Apparently at the time dueling was illegal in Georgia but not in South Carolina. The combatants, both residents of Augusta, chose to hold their duel in Vienna.

After the towns died farmland and forest reclaimed the former town sites. In 1951, one hundred years after the Smyth-Thomas Duel the Army Corp of Engineers built the Clarks Hill Dam, flooding the Savannah Valley and the locations of Lisbon, Petersburg, and Vienna under what is now known as Lake Strom Thurmond.

Next up, I paddle the waters of the lake to see what’s left of these three towns. Click below to continue to the next page.

2 thoughts on “Kayaking to Vienna”