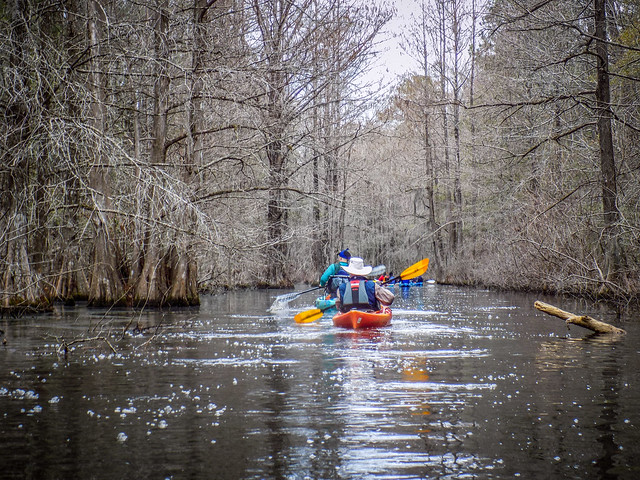 I haven’t really gotten back to my paddling routine since returning to the east coast. When I saw that my friends at Tri-County Blueways Paddlers were heading back to the Old Santee Canal, I jumped at the chance. It also turns out that with my new church duties this would be my last Sunday paddling excursion for quite awhile.

For this excursion I’d be joined by Jim Leavell. Jim has been kayak shopping and wanted to try out a boat with a peddle drive. He rented a Jackson kayak with just such a drive. I wanted to bring my big red Tsunami, but there was a problem. The Jackson weighs in a nearly 100 lbs, so getting it on top of my car might be a problem. At nearly 18 ft, the Tsunami was too long to fit into the back of Jim’s truck. Even my shorter Tsunami wouldn’t fit. I wound up taking my new Dagger Axis 120, and it turned out to be an excellent boat for this trip.

Since we were unsure of the loading situation, we loaded up the boats on Saturday so that we could head out early on Sunday. It was a three hour drive down to Angel’s Landing on the upper end of Lake Moultrie. When we arrived, Deb and Ed, the group leaders, were already unloading. Some sort of fishing tournament was going on so parking was scarce. We found a place and began prepping our own gear.

I’ve paddled with the Tri-County group several times. They have always been a fun, collegial group, but the makeup varies from trip to trip. As the leaders, Deb and Ed are the only consistent paddlers I’ve seen. Four other paddlers would be joining us for this trek. Many were paddling blue Tsunami 145s, just like my big blue. This is the third time I’ve done the Old Santee route and the second time with this group.

It was a chilly morning and I was glad I had dressed in layers. We set out with a slight breeze and overcast skies. There were a few osprey out and we saw lots of loons out on the lake.

…at first. Jim was able to keep pace with everyone using just peddle power. However, as we reached the entrance to the old canal he started to have problems. A nut or something was missing from one of his peddles and it was starting to work its way loose the farther he went. We desperately searched for the right sized hex key to tighten down the peddle, but none of us had the right tools.

I told Jim that if he was seriously considering this boat he should think like a cyclist. This boat has more moving parts that can go wrong and he should keep a small kit with all the proper tools. Jim was able to switch to a paddle and found that the boat paddles as well as it peddles. The paddle was actually better for the narrow canal with debris.

As for my Dagger Axis, it did great. With the skeg down it tracked nicely along the lake. I pulled up the skeg inside the canal and I was able to pivot round potential hazards and get over some submerged logs. This boat is going to be great for river adventures. My one complaint is that I can’t get to things easily. There is quite a bit of space behind the seat but it’s a pain to lean forward and reach. The rear hatch is completely out of reach. I guess I could use my deck storage bag, but there’s not a great way to secure it. I’ll have to work on this.

Ed gathered us together at the entrance of the canal and we headed in. As we passed one of the enclosed areas we heard gunshots – duck hunters. We wanted to give them plenty of room.

With all of the recent rains the water was much higher than the last time I’d been through here. There were still a couple of tricky places, but for the most part the route was clear. I remember one particular log that we had to pull ourselves over and I feared for Jim’s peddle drive mechanism. Fortunately it was submerged enough so that it wasn’t an issue.

As we approached the railroad crossing we heard a train blast. One of the long coal trains was crossing. I could see it through the cypress trees, but the train had cleared by the time we reached the trestle.

On our previous two trips this is where we would get out and have lunch at this spot. The Palmetto Trail crosses here and the canal doesn’t go much further thank this point. This time we didn’t get out, but it did make a good spot to gather the group, rest, and chat for a bit.

We retraced our steps fairly quickly. Our plan was to have lunch at the Angel’s Landing Cafe and they closed at 2:00 pm. We wanted to make it back by 1:00 so that we weren’t coming in at the last minute.

We made it back in time and had a nice lunch together before parting ways. We paddled a little over five and a half miles on this trip. Here’s a link to my photo album on Flickr:

As for the boats, I still have my doubts about the peddle boat. I know Jim wants to save his shoulders, but hefting around a 100 lb boat won’t help. The peddles themselves seem like a lot of moving parts that can go wrong. My boat wasn’t without its own issues. Access to gear is a problem. If you forget to put the skeg down it will do Crazy Ivans as soon as you stop paddling. I also found that the main deck is has a stippled texture. My GoPro suction cup wouldn’t stick to it and I suspect adhesive mounts might also be a problem. I may have to permanently mount one with bolts.

Other than those technical issues it was a great trip. It’s always good to get with Deb and Ed and Jim enjoyed meeting another group of paddlers. I just hope that they schedule more trips on Saturdays or mid-week so that I can continue paddling with them.

…and on an almost, but not quite, totally unrelated note….

With this trip I got to thinking about a chance encounter I had in Washington last year. I was in Bellingham for one of my Thursday night gigs. I opted for a Cajun restaurant not far from the venue, but it was crowded and the only seating was at the bar. A woman in her early 30s took the seat next to me and we started chatting about our martinis. She was also by herself, so we struck up a conversation. As an older, happily married guy I guess she thought I was safer than other guys at the bar trying to hit on her.

Until recently Heather had lived in Seattle and played guitar in a band with her brother. Something had happened and she had left the band and decided to get a new start, pursuing a degree in writing from Western Washington. She struck me as a bit of a lost soul just needing a friendly ear. In between music, writing, and martinis we had enough to keep the conversation going over dinner.

I asked her about the band and she said that it was called Santee. My mouth must have dropped open. She had no clue about the origin of her band’s name. I’m not sure she believed me when I said that it comes from my home state, and is the name for both the river and the short-lived canal, as well as a band of Native Americans for whom both were named.

Dinner over, Heather and I parted ways, me for my guitar gig and she to study. I never saw or heard from her again, but for a moment it was fascinating connection between east and west coasts.