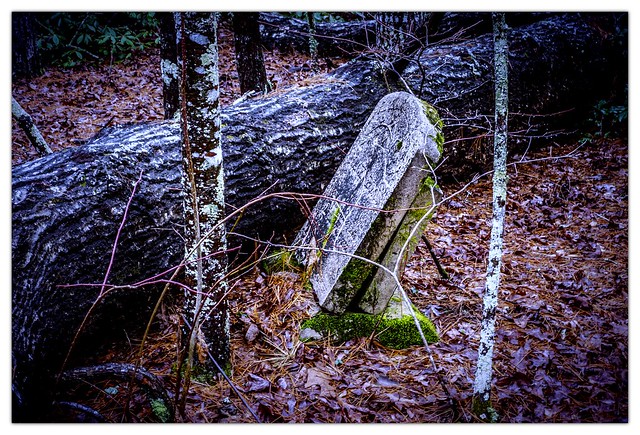 Last week it was announced that a new preserve has been established under control of SC Department of Natural Resources. The new public space, called the Tall Pines Wildlife Management Area, will be open to hunting, fishing, and hiking. Located in Northern Greenville County along the banks of of the South Saluda River, the property includes several lakes, nearly 1800 acres, and…the site of an old church and cemetery. Fellow explorer Mark Elbrecht and I decided to see what remained.

As much as I’ve rambled over this part of Greenville County, somehow I’d missed the Tall Pines property. To others, though, it was well-known as a fishing spot, as seen in this 1958 clipping from the Greenville News.

I remember passing a For Sale sign at the corner of Highway 276/11 and Moody Bridge Road showing that the property was for sale. I was afraid that someone would snatch up the property for development, and in 2007, someone did.

Burroughs and Chapin Co. from Myrtle Beach planned a huge development, initially with 1200 homes and a public market. It looked obscenely elaborate, and would change the name from “Tall Pines” to “Copper Lakes” for some reason. Fortunately, they scaled back their plans, whether from public outcry or financial uncertainty I don’t know.

Even more fortunately, the plans never came to fruition. Eventually, with the help of the Conservation Fund from Virginia, SCDNR was able to purchase the entire tract and incorporate it into their WMA program.

Earlier this week Mark had posted a link to another upstate blogger, writing about her trip to Tall Pines. He made plans to visit this past Wednesday, and I decided to tag along. When Wednesday rolled around it was dumping rain in Greenville and I thought the trip might be a bust. However, the skies cleared. It was muddy, but wasn’t raining when we arrived at the parking lot overlooking the largest of the lakes.

In the middle of the lake is an island with an unusual brick structure with a tower of sorts. We had no idea as to its purpose. Mark and I both wished that we had our kayaks to explore.

With the rain the outflow from the lake was quite dramatic. On the other side of the road was another structure. We couldn’t tell if it was part of an old bridge or something else.

On the lake side of the road there was lake access which would be perfect for launching.

This was cool, but we had a destination. Mark had the coordinates for an old church and cemetery nearby. GNIS showed this to be South Saluda Church. The church shows up in aerial imagery from 1955 and it appears on a 1967 USGS topo map.

Google Earth historical imagery shows that the area was logged in the early 2000s. The namesake pines were taken, but a stand of old oaks remain in the proximate location of the church. That would be one of the landmarks for us.

At first we thought about bushwhacking over the hill, but decided to walk along Moody Bridge Road until we got to the dirt road leading to the top of the ridge. Along the way we checked out the dam separating two of the lakes. At least, that’s the way it appears on maps. In actuality it’s a broken dam between a lake and a wetlands area. At the bottom of the broken dam a stream flowed through.

The dirt road leading up to the church and was very clearly marked. It was an easy, albeit muddy climb to the top of the ridge.

At the top of the ridge we found a clearing. It looked like this had been a regular campground. There was a bit of trash, but it wasn’t too bad. Another dirt road led south, but our target was to the north.

Some yards north of the clearing I spotted what looked like field stones.

But that wasn’t all there was to the cemetery. Mark spotted some headstones under the branches of several fallen pine trees.

Click on the page turn buttons below to continue…

17 thoughts on “Buried in the Tall Pines”