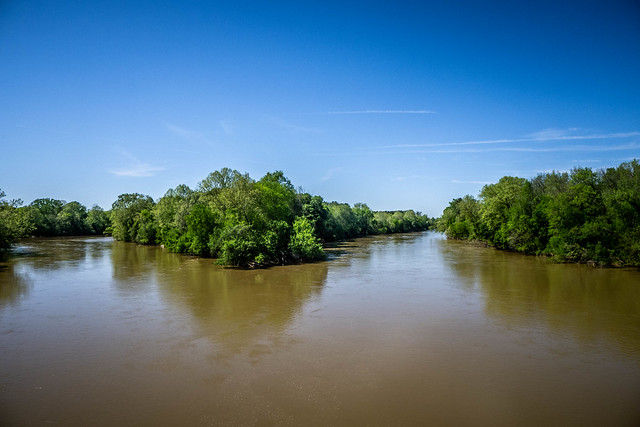 During our Lost Communities course for OLLI someone said that they wanted to got with Scott Withrow, my co-teacher, and me on one of our adventures. We confessed that we had never actually gone on an adventure together, but independently had been exploring many of the same areas. We decided that it was time for that to change. We had both wanted to explore the Broad River area for the following class, so we decided to do that together.

Scott came by and we got an early start on that particular Tuesday. Since it was on our route, I introduced hime to the delicacies of Bill and Fran’s for a good true Southern breakfast. From there we headed eastward on Highway 34 toward the Broad.

Scott had driven through the area the previous week but was unable to find a couple of spots. We turned onto Maybinton Road, then onto Old Blair Road. We turned north onto Henderson Road, and there we made our first discovery.

One of Scott’s topics for our class is Hendersonville. Not the one in North Carolina, but a short-lived settlement on Henderson Island in the Broad River. Scott wanted to get a good photo of the island for his talk. Henderson Ferry is actually across the Enoree River before its confluence with the Broad.

Finding the Ferries and a Cemetery

The road didn’t reach the river or former ferry location. There was a dead end with a gate. In front of us and to the right was the old Henderson home place, built in 1850. We didn’t get a good view of the house, so no photos, but according to a survey of Newberry County Historical Sites it’s a two story Greek Revival “cottage”

The ferry was about a quarter of a mile further along the road. Robert Mills 1825 map of the Newberry District shows the Henderson home and mill. Instead of a ferry it shows a toll bridge across the river.

Back in 2009 I had paddled this stretch of the Enoree with Lowcountry Unfiltered and we took a break at Henderson Ferry. The banks on either side were low and rocky and I could see how it would make a good river crossing.

As we were driving toward the ferry we passed a site that caught our attention, so we headed back to explore. This was the Henderson family cemetery. It was impressive, sitting in a cleared area with a raised wall of Winnsboro Blue Granite.

The area inside the walls was raised and covered with pea-sized gravel. It was very neatly maintained. The grass around the cemetery had recently been cut and there were no weeds growing within the walled area.

In addition to the Hendersons there were other prominent names from the region. Apparently the Shelton and Henderson families intermarried regularly. We would be visiting Shelton’s Ferry and the ghost town of Shelton later in this trip.

The stones covered a long time period. The earliest was from 1810 with several others in the 1810s. The latest ones seemed to be mid-20th Century.

Seeing the elaborate stonework surrounding the graves, at first I wondered if there had been a church nearby. None of my references indicated any, so this was just for this one family and not a church yard. I pulled up my Find-a-Grave app but couldn’t locate the cemetery on the map. It turns out that they have it misplaced in the town of Pomaria.

Several yards to the left of the main cemetery was a smaller, fenced area. There were no identifiable markers, but only field stones. We wondered if it were a slave cemetery.

First there was about a half mile of rough gravel which made walking difficult. From there we had to bushwhack, using only my GPS to make our way toward the river. We reached a muddy flood plain covered with yellow flowers.

The area was quite muddy and looked like it had been flooded recently. We tried avoiding the worst of it, but as we brushed knee-high vegetation the mud on the plants got all over us.

Eventually we reach the Broad River just upstream from its confluence with the Enoree. We still didn’t have a view of Henderson Island.

Neither of us had thought to bring along a water bottle and we were getting thirsty and hot. However, the trek back was even more of a challenge. I was using the GPS for a more direct route, but we found this in the way…

Not exactly a swamp, but a flooded freshwater slough. It was quite extensive and we trudge through fringe mud trying to find a way around. By the time we found the route we were almost back at our original track., then we had a half mile on the rough gravel. We made it back to the car hot and tire, where I had water waiting for us.

We circled around several other small, dirt roads and eventually found ourselves on Shelton Ferry Road. My GPS indicated that this one actually does go to the river, so we followed it. At a couple of points I was glad I had four wheel drive, but it did get us to the river and the site of the old Shelton Ferry.

We were now upstream from Henderson Island, but we still had no view of it. It would be very easy to launch a kayak from here and we would be at the elusive island in no time. I’ll have to explore that as a later adventure.

On the Fairfield County side, directly across from us, was our next target for the day – Shelton and Clayton Depot, location of the Shivar Springs cisterns.