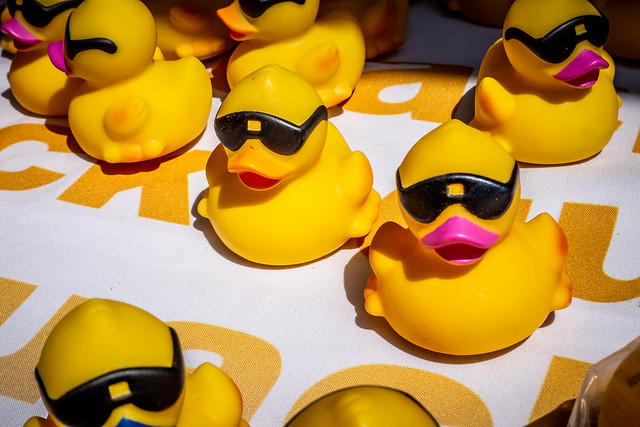 Last Saturday was Derby Day. For Greenville that means it’s time for the annual Reedy River Duck Derby, where thousands of rubber duckies are set loose at the top of Reedy Falls downtown and prizes are awarded for the first ones through. I had never witnessed the event, but this year decided to join my friends Jeff and Lori Holland and Our World Festival to do some drumming as part of the festival.

It was a beautiful morning for local events and it seemed to be THE day for local festivals. The Strawberry Festival was taking place in Slater, it was opening day for the downtown Farmers Market, and the main Farmers Market was having its plant festival. Other local communities were having their annual spring flings.

I decided to head downtown early to see what was going on. I found good, but probably illegal parking near the top of the falls. All day I worried whether or not I’d find a ticket, or, worse yet, find my car booted or towed. I got lucky and no one worried about me for that day.

I was too late to adopt a duck for this year. Adoptions were $10 with various prizes. There were still lots of tents set up by the event’s sponsor, the Rotary Club, where you could buy Duck Derby merchandise.

There were other tents for various community organization and businesses throughout the park. All of these were family-oriented.

There was one with a less-than-subtle double-entendre of a name that seemed oddly out of place for a family event.

You pay them money to let you take a sledge hammer and smash shit, including tech gear, furniture, and an old BMW. I guess you can make money from just about any neurosis.

I left the Falls Park area and headed downtown to see what was happening with the Farmers Market. As one might imagine on opening day, it was crazy crowded. I arrived at the tail end of the market and several vendors were packing up to leave. That didn’t stop the crowds who had descended not only to visit the market but to take part in other festivities.

There were a couple of buskers at the market. A rather unusual drummer and another young woman with a keyboard. They were displaying “official musician” tags, I assume issued by the city. There was another duo performing as part of the regular market offerings.

I still had some time before I met up with my drumming friends so I grabbed a burger for an early lunch at Grill Marks and watched the crowds wander by. From there I headed back to the car to grab my drum, then wandered on down to the main stage in the park where I found Jeff and Lori getting set up. They had steel drums in place, and we would sit behind with our djembes.

There were Boom Whackers available for kids to join us on the rhythms. Hoola Hoopers also came by and danced and hooped to the pieces. Jeff played steel drums, Lori played bass steel drums, me and three other drummers kept rhythms going.

After several songs it was time for the hat contest. Participants had created elaborate Duck Derby hats that would be judge by a panel. Some of these featured models of the Liberty Bridge and falls, some even had water on which floated duckies. There was one other rather…unusual character, who was not part of the competition.

After the hat contest we came back for a second set. We played until just about time for the derby to start. At that point Jeff strapped on the steel drum and we all marched down to the river for the main event. A bugle then announced that it was time for the race.

The ducks were corralled at the top of the falls and let loose at once. At the bottom. Floating booms prevented the ducks from going further downstream. In the middle of the lower boom was a PVC pipe. The first duck through that pipe would be the winner.

The prize-winning portion of the event was over fairly quickly. However, it took a long time for the rest of the ducks to make it over the falls. When I left there were workers with poles trying to coax the remaining ducks over the falls and out of nooks and crannies where they had gotten trapped.

The beautiful weather didn’t last. I made it back to the car and headed back just as a deluge started. Jeff and Lori had just been able to get their equipment back into their car.

One final note – Laura and I attempted to make mint juleps and failed spectacularly. They were far too sweet. I think I need more bourbon and less simple syrup. We watched this year’s weird Kentucky Derby then ended with a quiet evening at home.