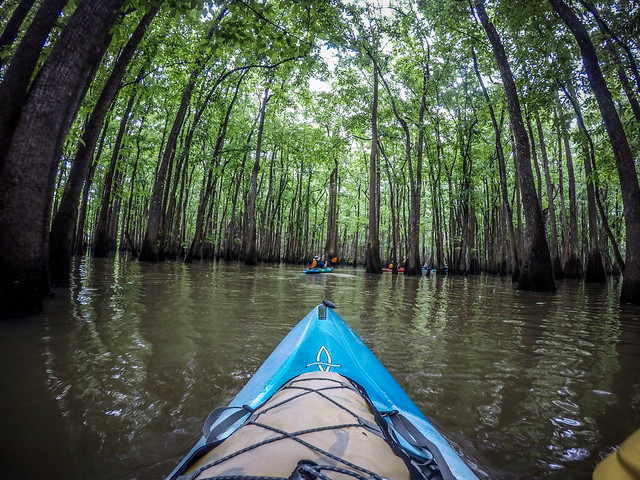 The past several days have been a marathon of kayaking trips. I’ve done three paddles in five days for a total of 21 miles. Each of these trips had some similarities, but there were some significant differences. The first trip was on Thursday of last week to Sparkleberry Swamp with the Tri-County Blueway Paddlers.

Lately the Tri-County trips have been on Sundays, so with my new schedule I haven’t been able to take part. This time they had scheduled a trip for a Thursday, which worked perfectly. I hadn’t seen my friend Dwight Moffett in a long time, so I convinced him to join me. Early Thursday morning I headed down to Columbia to grab Dwight, then head to the swamp.

By the time we got there folks were already gathering. It looked like it was going to be a gorgeous day for a paddle. Thinking as much, I left my spray skirt and paddling jacket in the car. I wouldn’t need them. I couldn’t have been more wrong.

A group of thirteen gathered for the trip. I was surprised at the number who would be coming for a mid-week paddle. We launched under a sky broken with a few clouds. The water levels were near perfect, unlike the last time I paddled here.

There was the standard assortment of kayaks – Pungos, Tsunamis, Perception Carolinas. There were two unusual boats joining our fleet. One paddler had a massive Eddyline fishing boat, a sit-on-top. Another had one of the Oru folding kayaks. The Oru is made from corrugated plastic that folds into a flat pack for easy transportation. I would be curious to see how these performed in the swamp.

We started out on our usual route, through the canoe cut then across the expanse of Sparkleberry Flats. As we paddled the blue sky disappeared, replaced by first clouds, then a light drizzle. By the time we reached my beloved cypress cathedral the drizzle had turned into a steady rain.

At the end of my favorite stretch of cypress the group gathered. Normally I would head south down toward Otter Flat, then to Riser Lake. This time Ed took us north toward Jones Flat. Dwight and I had paddled this route before, but it wasn’t our usual path. It would be good to see different scenery.

As we continued through the thick cypress the rain turned into a steady pour, then a deluge. The cypress branches initially offered some protection, but the rain just got too heavy. We were getting drenched, I was really regretting not having my jacket or spray skirt. I was also getting cold.

Fortunately, the rain began to let up. We stuck to the western edge of Jones Flat then re-entered the cypress. With the high water levels it was fairly easy to navigate.

The next stop was Fifty Fools Cabin. All of these cabins are illegal and could be removed by DNR at any time. I’ve stopped at Fifty Fools many times and had lunch on its deck. Matt and I have even been in touch with the guys that built the cabin and they had told use to stop by anytime. Although we didn’t get out of the boats, this did make a good lunch stop for us on this trip.

After lunch we headed south along Fifty Fools Creek until we reached Otter Flats. With the water this high you can’t really tell what’s a creek and what’s just part of the forest. It’s also VERY easy to get lost. I was glad I had a good GPS and had fairly good knowledge of this part of the swamp.

Deb had said we were heading to “the lake.” I assumed that meant we were paddling up to Riser’s Lake. Instead, we crossed Otter Flat and took McGurt’s Cut to the south and wound up on McGurt’s Lake. It’s smaller than Riser’s, without the high banks that define the south side of that larger lake. We paddled back to where an osprey nest dominated an old cypress.

It was time for the return trip. We retraced our route from McGurt’s back to Otter Flats. From there we were on our standard route, back through the Cypress Cathedral and out to Strawberry Flats. We passed several miles in amiable conversation, glad that the rain had stopped.

Despite the rain, it was an excellent mid-week excursion. I learned a lesson, though. Regardless of the forecast, I’ll always have my jacket and spray skirt with me, just in case.

Our loop through the swamp was 7.75 miles.

Here’s the time-lapse of the trip.

I’ve done this port of Sparkleberry many times, now, and I’m wondering what the other parts of the swamp are like. I’d like to head south from Sparkleberry Flats to see if I could get down to Rimini Landing or perhaps as far as Low Falls Landing. I’d like to make it all the way over to the Santee River. I’d also like to head farther north than Jones Flat. Maybe someday I’ll get up the guts to venture beyond my comfort zone in the swamp. I’ll may sure I have my GPS with me and lots of batteries when I do.