Sometime before Christmas I was doing some straightening around the house and I kept stumbling on cameras that were out of place. Some are ones I’m currently using, and some are vintage cameras we keep for nostalgia. I began to wonder exactly how many imaging devices I have in the house. In addition to the obvious cameras, there are webcams, tablets, computers, and just about any phone we’ve purchased in the last decade. That’s a heck of a lot of cameras. I decided to gather as many as I could an create a panoply of cameras for one grand photograph.

This post tells two stories. The first is the story of the an image. The second is an idea for series of future blog posts that the image engendered.

I set up a table on the basement with a couple of pieces of fabric as background, then began arranging the cameras. I set up a couple of utility lights for even lighting and got ready for the shot. 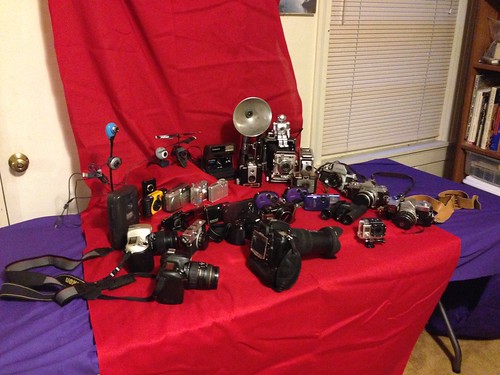 However, there was a problem. With all of my cameras on the table, I didn’t have anything with which to take the photo. I decided to use my iPad. Alas, the camera on the iPad is nowhere near as good as the iPhone, and no matter how many photos I took, they all came out grainy. I knew I’d have some additional work to do.

Here’s the shot I decided to use: 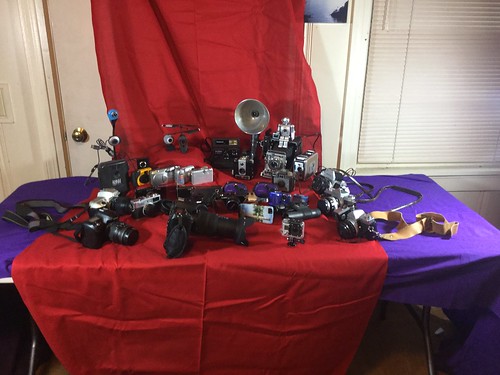 In Photoshop I cropped the image, then used the stamp, content-aware fill, and healing tool to spread the purple and red background. 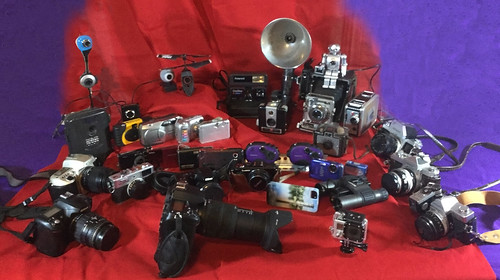 I still wasn’t happy with it. The boundaries between red and purple were unnatural, and the shot was still grainy and out of focus. I figured an artistic touch was best.

I imported the photo back into my iPad and ran it through a Sketch app that I have. It rendered the image as follows: 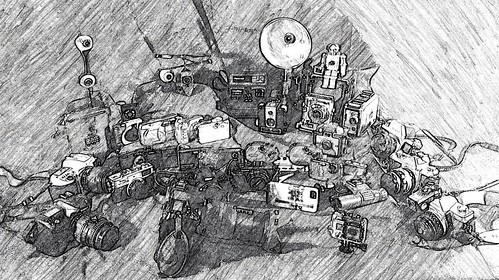 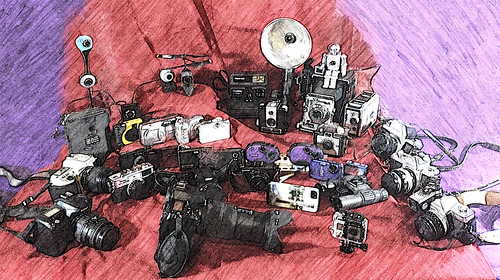 Now a bit about the cameras…

I won’t describe all of them in this image, but I’ll point out a few of them. In the very back is a 1940s vintage Singer Graflex. Laura’s father gave this to me. Along the right side are a 1960s vintage Nikon F and Nikkormat SLR, also inherited from Mr. Wright. In front of that is my father’s Minolta.

There are two Kodak Brownie Box Camera’s in this collection. One belong to my sister, Glynda. When she went off to college, somehow I wound up with it. I remember taking shots with it on several family trips. On her 50th birthday I gave it back to her, and she was shocked that it still exists. A couple of years ago she returned it to me, along with the other box camera and Kodak movie camera.

One of Laura’s 35mm cameras is in the collection, as well as a Polaroid One-Step that I bought for her many many years ago. The first SLR I bought is there, a relatively recent Nikon N60 35mm. My first digital camera, a Fujifilm Finepix 3.1 megapixel jewel is up there, as well as other various point and shoot cameras. There are some webcams, a Meade Binocam, a trail camera, and an Air Hog helicopter with a camera.

…which brings us to the final part of the post, an idea for a series.

Discounting all of the vintage and non-functioning cameras in that collection, that’s still a heck of a lot of cameras. I’ll often have more than one with me, depending on the activity. I always have my iPhone. On a photo trek I’ll have the Lumix, GoPro, and D7000. On a kayaking trip I’ll have the L330, the GoPro, and the WP33. Sometimes I’ll bring the older D50 along if I want to go back and forth without changing lenses.

Most normal humans only carry one camera, if any apart from their phone. The series I want to do will be entitled “One Camera”. I’ll pick one of the cameras above and do a photo walk with just that single camera. I’ll try to keep the location consistent so that I have similar shots for comparison – probably downtown Greenville. We’ll see what happens. Can I recreate the same shots? I may pick a few reference shots, then see what else happens. It should be fun.

One thought on “A Panoply of Cameras”