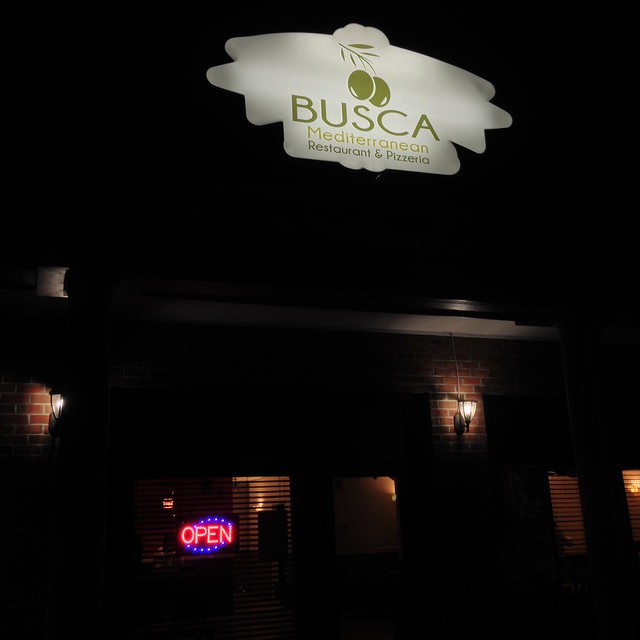 When Laura is gone I usually try to visit a couple of new restaurants. This time I found myself either dining with family, or eating my own cooking. Even so, I saw a sign for a new place on Pelham Road and decided to check it out. So, Friday evening I headed over to Busca Mediterranean Cafe.

Busca is located in the space once occupied by Schwaben House German Restaurant. Schwaben House moved to a new location on Laurens Road, leaving a big empty in this little shopping center. The manager’s wife, who was operating the cash register, said that the restaurant opened on December 8th.

When I did a bit of digging online I had a few unusual hits. There were no reviews on Yelp or Urbanspoon for Busca. However, all of the Google reviews for Busca referenced a “Carolina Pizzeria.” The reviews for that place were tepid, at best. If you go to carolinapizzeria.com it redirects to the Busca website. Carolina Pizzeria still has a Facebook presence that hasn’t been scrubbed. The photos on the Facebook page look exactly like the place that I visited, down to the artwork on the walls. This leads me to believe that the December 8 opening was more of a rebranding/renaming event, perhaps with a change of ownership.

The place is clean and spartan (yes, I did that intentionally.) There is a counter with registers, and two seating areas to the left and right. A few pieces of art hang on the walls, and light, very appealing jazz was playing in the background.

There were a few patrons when I arrived. There was a single woman and a family seated to the right of the counters. To the left, where I was seated, there was one other occupied booth with three women. At this booth one southern matron in her upper 60s with an outrageous accent was holding forth on the marvels of her new smart phone. Apparently she just learned the word “selfie.” During my meal another family came in and four other women took one of the booths in my section. 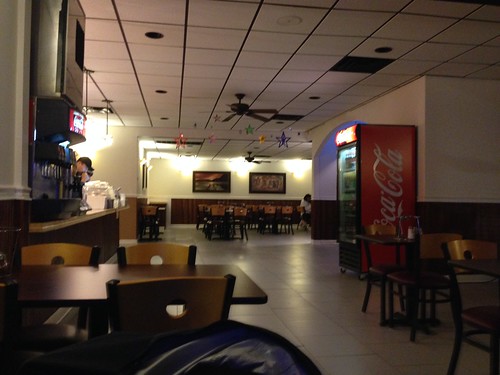 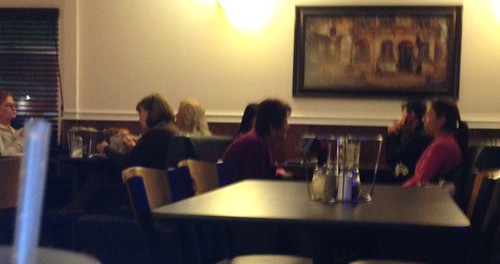 While I dined one gentleman came in for a take-out order, and it looked like someone was leaving with a delivery. 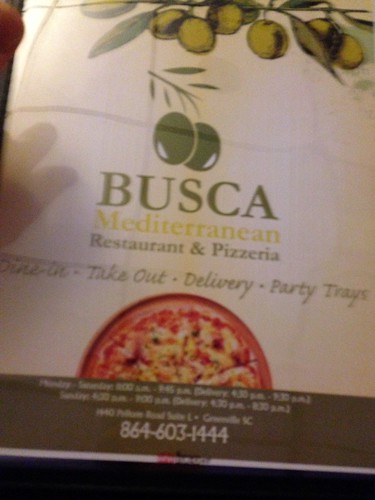 With the word “Mediterranean” in the name, those are the items I searched for first. There were the usual suspects – Lamb or Beef Shawarma in either a wrap or on a plate, and several Baba Ganouj, Falafel, and various kabobs. Most of the plates were $13-$14 and were served with salad and a side.

There were some appetizer options for $3-$6, including garlic knots, fried mozzarella and fried mushrooms, etc. Also available were Buffalo wings and various salads.

There were also several past listings. These seemed reasonably priced, starting at $7 and going up to $9. For a couple bucks more you could add a meat or other extra items.

One page of their menu was dedicated to pizza and calzones. I guess this was a holdover from there Carolina Pizzeria days. The pizza was listed as “New York Style”, and the woman I talked with said they made their own hand-tossed dough. Small to extra large specialty pizzas ran from $11 – $18, and, of course, you could add more toppings. A base calzone started at $7.

On the back of the menu were lunch items. Most of these were baked Italian dishes that could be plated up quickly. These were a quite reasonable $5.50 each. They also served pizza by the slice for lunch.

There were no alcoholic drink options – just sodas and water.

I ordered the chicken kabob with rice and a house salad. They didn’t have a recommended house dressing, so I went with a light Italian. Turns out that was a good decision. 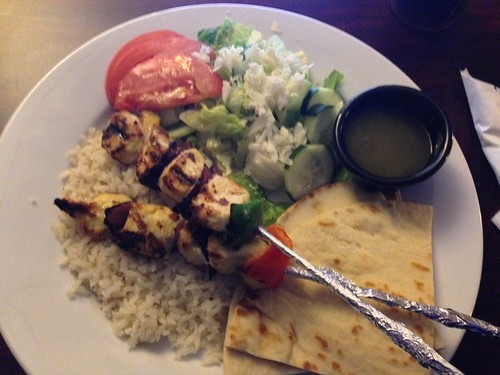 The chicken was tender and cooked nicely. There were a few pieces of pepper and onion, but no tomato as shown on the menu. I was OK with that, though. The biggest problem was that the chicken was a bit…bland. It didn’t have much flavor at all. When I dipped the chicken bites into the Italian salad dressing it was excellent. I almost ordered some extra dressing, but I had enough. I think that if they kicked up the spice level on their marinade it might be a bit better. They could also offer some sauces, such as a tahini or harrissa with the chicken. Don’t get me wrong – the food was good, just not as flavorful as I would have liked.

The chicken was light enough that I decided to try one of their desserts. I’d planned just to get Baklava or something like that. I spotted Zepolis on the menu, and asked the waitress what they were. She described them as doughnuts with powdered sugar and either raspberry or chocolate sauce. Sounded interesting, so I ordered them.

Turns they were much better than she described, and were the star of the evening’s meal. These were not really doughnuts, but little bite-sized bits of doughnut dough coated as described. They were light and delicious, and the portion was huge. This could easily have been shared with three people. 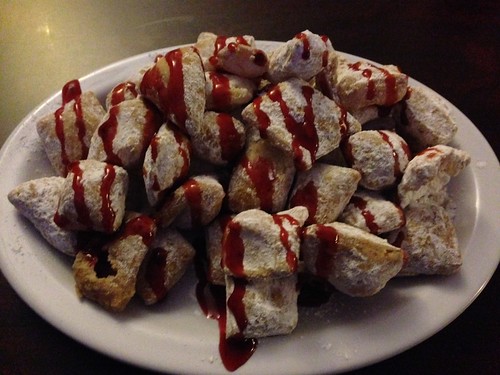 I ate part of them and took the rest to go. They made a great breakfast the next day.

I was hoping to see what some of the other entrees looked like. One of the booths with women ordered small individual pizzas. These looked good, but it was hard to tell since we were so spread out. I couldn’t catch a glimpse of what others had ordered, but it looked like most were ordering pizza.

One normally notices service when it’s out of the ordinary – either exceptionally good or exceptionally bad. This was neither. It was friendly, efficient, and totally forgettable, and that’s probably the way it should be. You don’t want service to detract from the meal. My waitress did confess that this was her first day on the job, and she had to go back a couple of times to find answers to my questions. Other than that she did a good job, keeping drinks filled and checking on me.

It took awhile for my meal to come out, but not too long. The booth with women who had ordered pizzas got theirs quite awhile after I had my meal, and they had been seated before me. I guess pizzas take a bit longer to cook.

I think I’m developing a knack for picking the one not-so-great meal on a menu. My food wasn’t bad, it was just a bit bland. It’s hard to say a place is good or bad based on just one entree, so I’d like to come back and sample some of their other fare. I will say that the dessert I had was outstanding.

From what I can see, despite the name change and emphasis on Mediterranean cuisine, it looks like their focus is primarily pizza. I’ll definitely have to try one of those the next time I’m back.