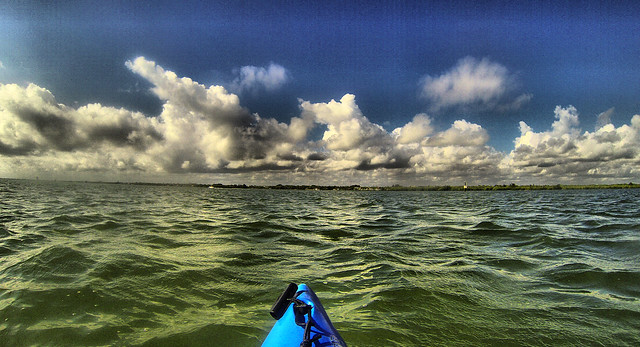 Of course I brought a boat with me. Amy has a boat ramp in her back yard, so I would be foolish not to take advantage of multiple paddling opportunities. That is, as long as the weather cooperates.

And the weather was being a bit persnickety. Sunday the breezes kept me off the water, but Monday morning I headed out. The water was still choppy. The wind was coming from the south, blowing the same direction as the incoming tide. I headed south, planning to paddle against the current and wind early in the trip, then take advantage of it on the way back. 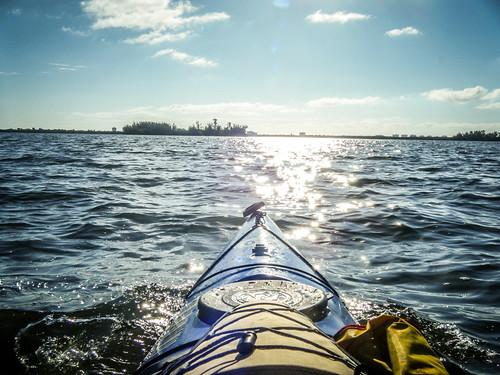 My typical float plan is to paddle about half a mile south, then cross over to the spoil islands. At this point the main shipping channel is at its narrowest, and there are clear channel markers on either side. I know where I’m safe and can wait to cross the street, so to speak. I paddled across to the island and paused a minute, then continued south.

Between the spoil islands and the barrier islands that separate the Indian River from the ocean there is a wide stretch of “flats” – shallow waters than can only be navigated by kayaks and shallow draft boats known as “flats boats.” Amy has such a boat, and they are common with local fishermen. There were lots of boats out fishing this morning, despite the bumpy waters.

Also along this side of the river there are a series of mangrove islands. These make up a maze surrounding what’s left of the old Fort Pierce Inlet. This was my target – if I could get back into the mangroves I’d have smoother flat water out of the wind. Paddling and exploring would be much easier. 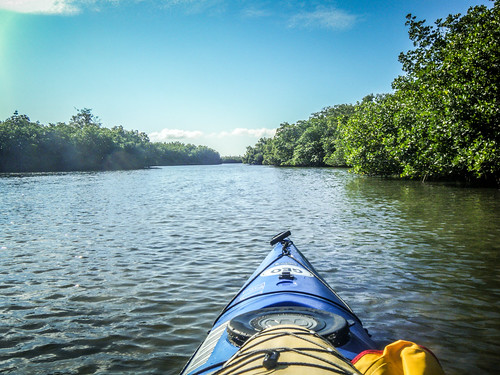 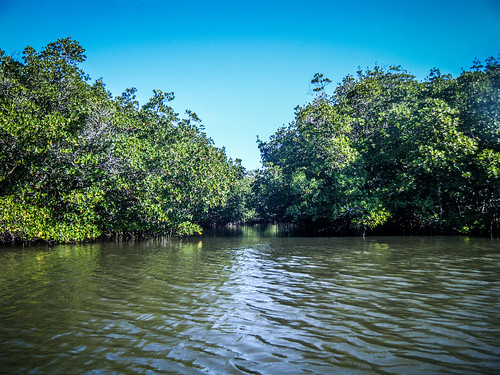 I found several intriguing little channels and decided to explore. I hadn’t brought a GPS with me, but I had my phone in case I got lost. I didn’t even bring a GoPro along on this trip – just my waterproof camera and my new cheapo Nikon with a long zoom.

The path led me back to an island with solid ground. I think I might have made it to Jack Island, but I’m not sure since I didn’t have a GPS tracker running. There was what appeared to be a trail running along the water’s edge just on the other side of the mangroves, and I came to a small fishing/observation deck. 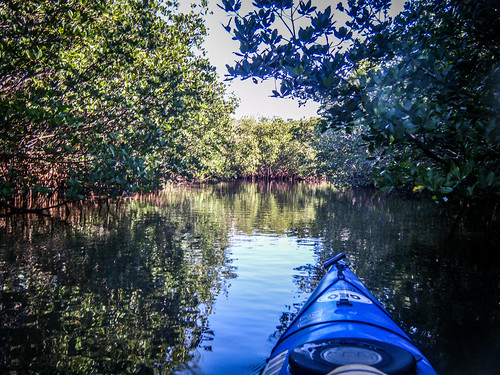 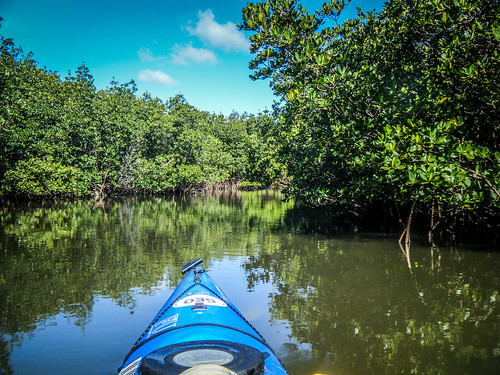 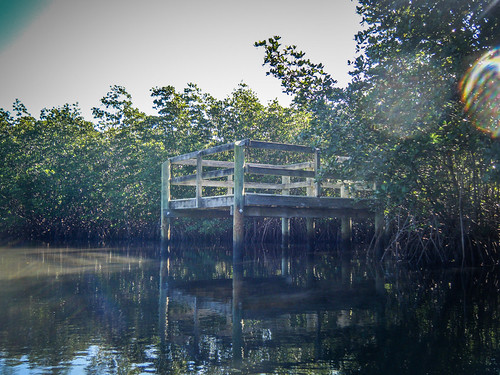 The small channel I was on opened up and eventually led back out to the flats. 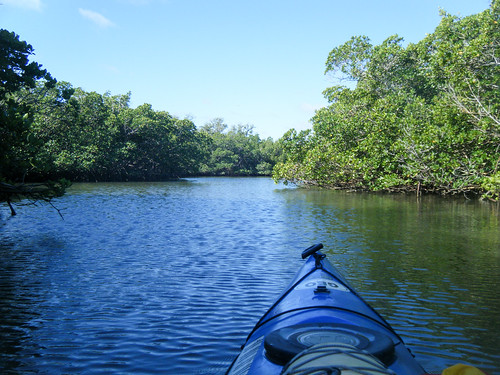 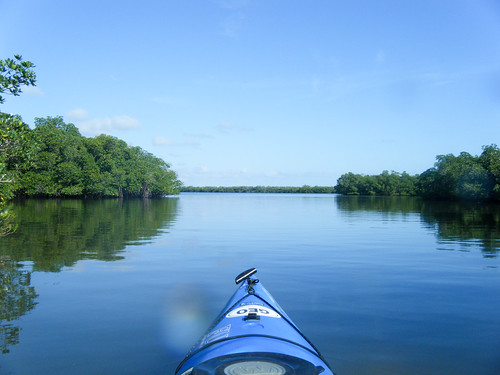 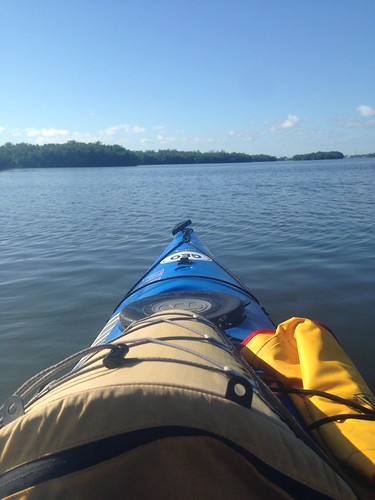 I paddled back to the spoil island and rounded to the leeward side. Beaching the kayak, I pulled out my mesh hammock and set up shop. There I just enjoyed the cool breeze, rather than battling it. I had myself set up so that I could watch boat traffic come and go. There were several large live-aboards – sailboats, and at least two Nordic tugs. On of the larger sailboats anchored in the protected area and a guy brought his Chihuahua over to walk it. 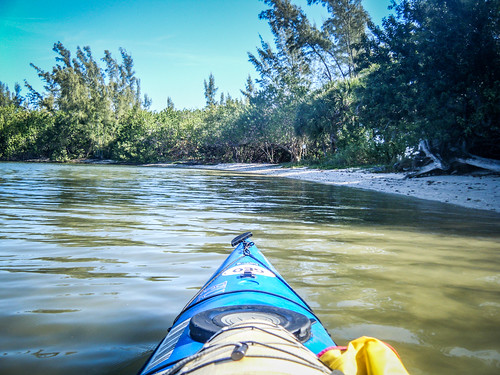 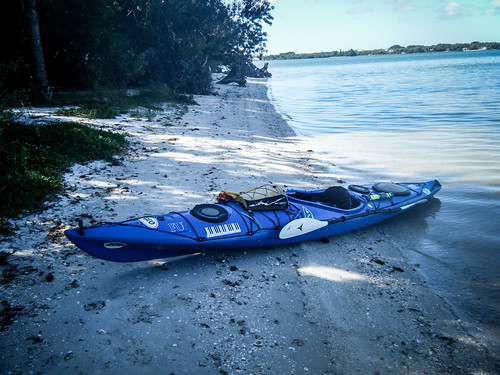 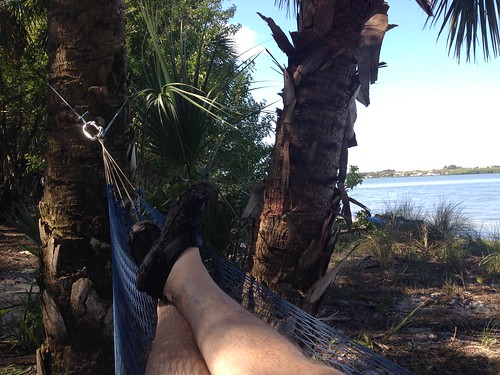 I headed on back. As I had planned, the wind and tide were at my back. Even so, it was still bumpy going. It seemed like the wind was getting stronger, so I wanted to be back before the waters got rougher. 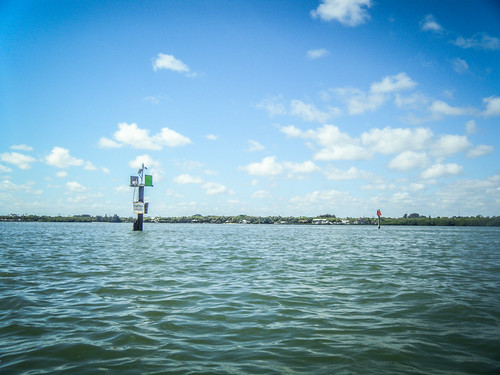 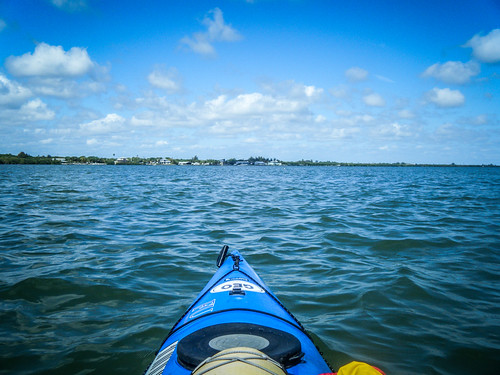 Tuesday morning I actually took two paddling trips. With the time change it’s a bit easier to get up and catch a sunrise. The skies were clear, which is not necessarily a good thing. I guess it’s a philosophical truth – the most beautiful sunrises have some imperfections. The clouds give color and interest to the sky. There were a few on the horizon, down where the sun should come up, but overhead it was deep blue. A waning gibbous moon hung over the palm trees to the west. 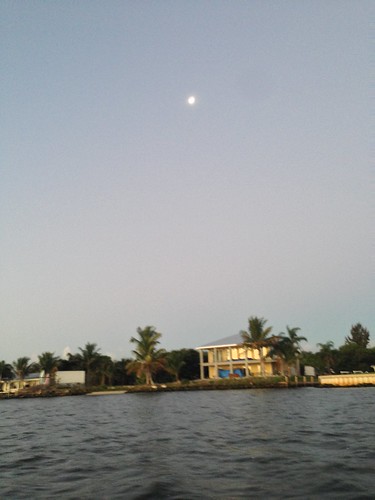 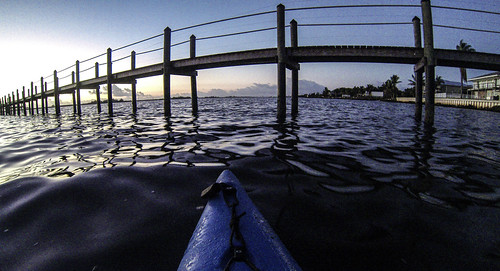 The sun came up as it always does. I stayed until it broke through the bank of clouds on the horizon, then paddled back for my first cup of coffee of the day. 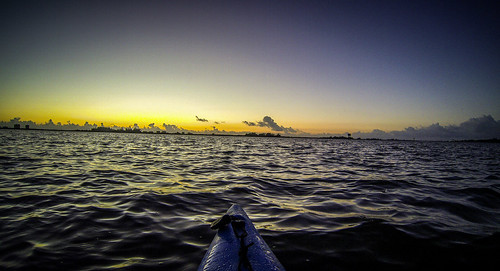 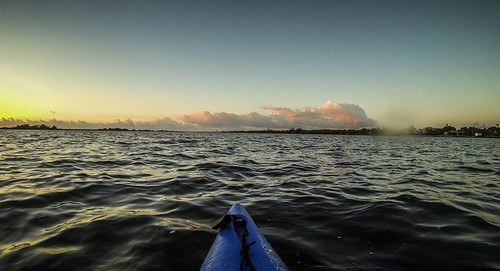 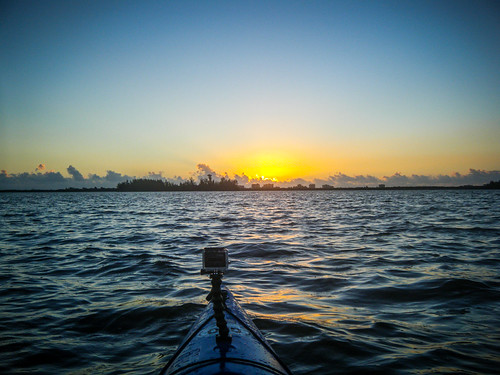 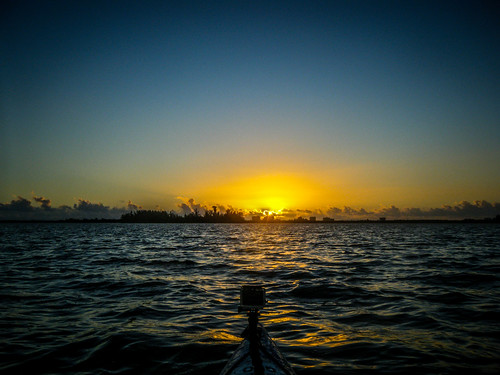 Suitably caffeinated, I headed back out before the winds kicked up again. I started out tracing the same route I had on the previous day. I crossed the channel and headed to the spoil island. However, I wanted to see some different waters this time. Instead of heading into the mangroves I turned north and began island hopping. I crossed to the spoil island directly across from Amy’s channel, then continued up to the next spoil island. 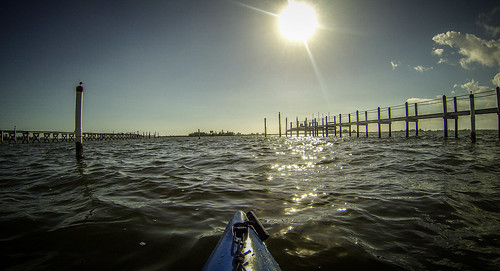 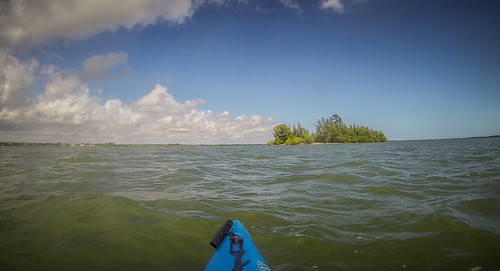 The water was crazy choppy. I was bouncing along like a fiend, actually kind of enjoying it. I’d certainly brought the right boat. My Tsunami handles rough water fairly well, as it turns out, and I never felt like I was out of control or was going to get dumped.

Even so, I figured more island time was in order. After all, I was recovering from shingles, and it had left my left shoulder with a constant dull ache. I was even doubtful about my ability to paddle long distances, but I seemed to be OK as far as that was concerned. I pulled into the sheltered cove of the island and once again set up my hammock, this time in the shaded north end of the island where I could watch boat traffic a bit better. 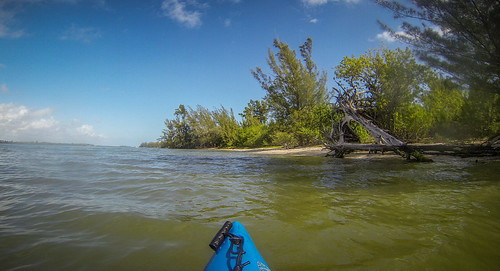 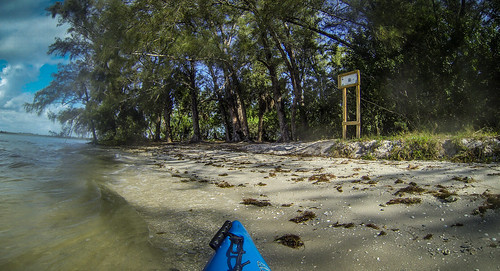 It was quite peaceful, except for the one bit when someone with a big go-fast boat (aka penis extension) decided he needed to come blasting through the manatee zone. He blew right past a couple of sailboats that were none too happy. 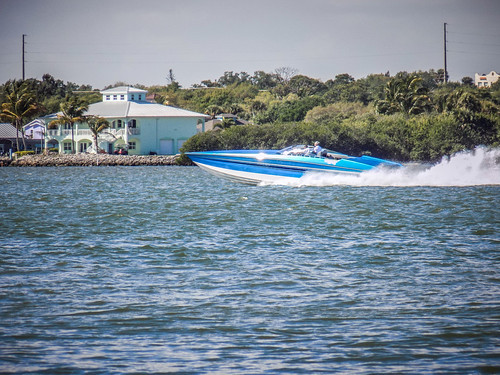 All was well and good, but I was noticing that the waters continued to get rough. I decided I needed to head back. As I was putting my hammock away it dipped to the ground and snagged a dessicated puffer fish. It took me awhile to extract it without damaging the hammock. 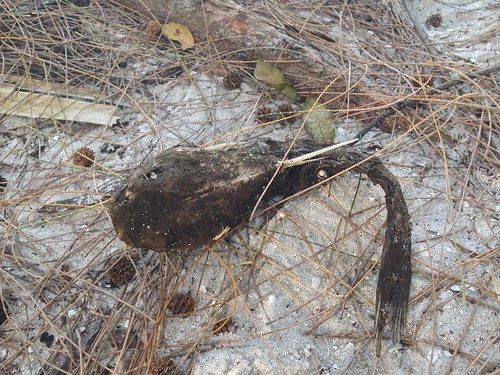 It was about noon, and just shy of high tide. I was kind of hoping that the turning tide would help me get back. However, what really happens is that the wind and tide working against each other set up a series of standing waves between Amy’s house and Harbor Branch Oceanographic Institute, where she works. I was glad I had some whitewater paddling experience. While it was fun bouncing over the waves, it made getting back home difficult, and I was really ready for lunch.

The wind and waves continued to rise, and making the turn into Amy’s little channel was trickier than I had planned. I made it back to the ramp safely and was putting away my gear when my heart sank. I had left my waterproof camera out on the island. I blame the puffer fish. It distracted me from remembering to pick up my camera.

Battling the waves I’d not had much time for photos, so I didn’t miss it until I got back. Having just made that battle, the last thing I wanted to do was head back out. I hopped onto Amazon to start looking for a replacement.

Wednesday morning started as the others had this week – clear and a bit calmer, but still breezy. I decided to see if the camera was still there. I paddled straight across the channel, then bounced across the waves to the north. I landed, and found my camera right where I had left it, hanging on a tree next to where my camera had been. 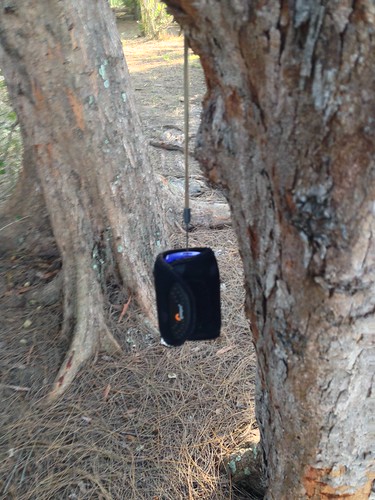 I came straight on back without much sightseeing. By this time I was starting to suffer from dock-rock at home, as well as an aching shoulder. It was time to rest from three days of kayaking.