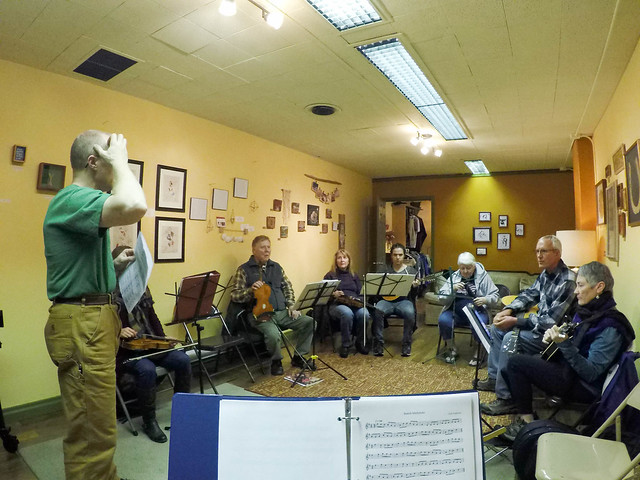 It had already been a week of music. Monday night was the Irish Music Session at Honey Moon Mead in Bellingham and Wednesday was another meeting of Bring Your Own Instrument. Thursday night I headed back to Bellingham for more Celtic music with the Slug Jam.

The “slug” in Slug Jam is reflective of the pace of the music. This group takes things slowly so that participants can learn and become comfortable with the tunes. According to their rules…

First and foremost, this is stress-free zone for beginning musicians; a place to play familiar tunes slowly with other beginners without the pressure of an audience or an instructor observing.

All instruments and voices are welcome.

Any and all “mistakes” are welcome, because this is part of the learning process.

There is no such thing as playing a tune too slowly. ANYONE has the right to ask the group to slow down!

There is no such thing as playing a tune too many times. ANYONE has the right to request we play a tune some more!

It’s okay to just listen if you don’t feel confident enough to play.

No one will ever be “put on the spot” to suggest a tune or to perform.

There is no such thing as a “dumb” question or request!

We will spend most of our time playing familiar tunes, and less time learning new tunes. If you have a new tune to share, please bring at least 5 copies of sheet music (with chord symbols) to share with the group and be patient with us Slugs as we follow along!

Quite the opposite of Monday night’s session and the session at Littlefield.

Even so, I don’t like being caught off guard. I was very pleased to see that the repertoire for the group was online. There were even slow and faster MIDI files with which to practice. There was even a section of Christmas music. I downloaded all of them, then printed the PDFs and created my own notebook of tunes.

With the tunes in hand I started practicing. I ran through several first just strumming along with the chords on the guitar. That was easy enough, but I wanted to tackle the melody. My problem is that I don’t play pipes, fiddle, or any other traditional melodic instrument. The best I could manage was my melodica. I can play the tunes fairly way on it, but I don’t have any of these memorized.

I had played through the tune Swallowtail Jig and an idea struck me. Pushing Christmas ornaments and decorating supplies out of the way, I set up a makeshift recording studio on our little table. I set up my iRig microphone and my iPad with Garageband and gathered several instruments. 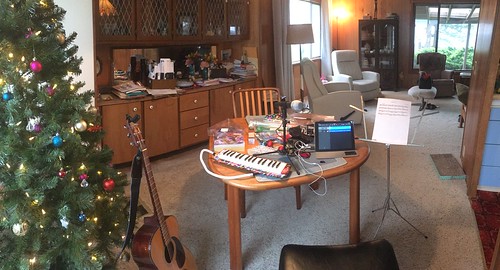 First I played through the piece on melodica. Then I laid down tracks for rhythm on both guitar and banjo. Finally for percussion I tried to emulate a bodhran on my djembe. Here’s the result, uploaded to SoundCloud.

I felt like I was ready. Thursday evening I loaded up my instruments and headed to Bellingham.

After finding parking (a challenge) and grabbing a bite of dinner I found my way to the Bellingham Folk School, the same place I had played with the “Calling all Strings” session. When I walked in I was surprised to find Tony Kuphaldt, the guy who played the glockenspiel at Monday night’s session. Both Tony and his wife Val recognized me and greeted me by name. Tony would be leading the Slug Jam, and was in the process of setting up a vibraphone. I found a spot and got my gear set up. 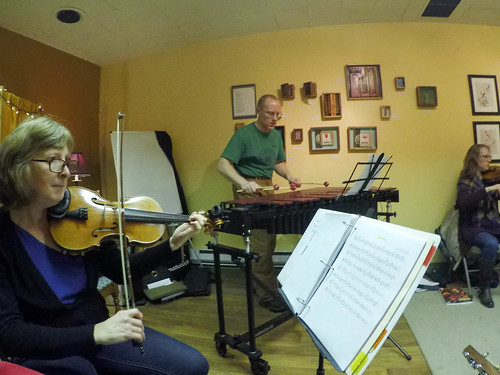 Others started to arrive. There were the usually assortment of fiddles, etc. One guy had a mandola, a larger version of a mandolin. This evening three of us had guitars. In all, twelve musicians gathered for the Slug Jam.

Tony got up and made a few announcements, then we started with the Christmas tunes. True to the group’s name, we took these slowly enough for everyone to be able to play. From there we moved to the standard repertoire.

I started on guitar, but soon switched to melodica. To be honest, it was more fun (ie, less frustrating) to play. At this pace and with the music in front of me I could play anything on the list. Here’s a recording from early in the session where I just played guitar. This is the Swallowtail Jig which I had recorded at home.

On “Josefin’s Dopvalz”, a Finnish waltz, there was a counter melody which I played on melodica. On the Part B section of the tune I played both parts, melody and harmony, on the melodica. Here’s that recording.

We alternated between reels, jigs, and other traditional piece until a little after 7:00, when Cayley Schmidt arrived. Cayley is the founder of the Bellingham Folk School. The Slug Jam players were giving a Christmas concert on December 14 at the Leopold Theater, and Cayley was there go give suggestions about putting together the program. At this session there was much more discussion than playing, but I understand that this was unusual as they had an upcoming event.

Soon, though, we got back to playing. For the most part I stuck with the melodica but occasional switched back to guitar for the heck of it. We wrapped up the session with Venjan, a Finnish lullaby. This seems to be their traditional ending piece. Here is a recording of it.

I’ve encountered nothing but nice folks at each of the groups I’ve attended, and the Slug Jam folks were no exception. I enjoyed playing with them. To be honest, though, they were a bit too slow for my tastes. I need to find a group somewhere in between the Slug Jam and the full-blown Irish sessions at Littlefield or Honey Moon Mead. There is another slower session put on by the Bellingham Ceili Club on Wednesday nights. I may have to give that one a try.

The Slug Jam makes the fifth group with which I’ve played, and I’m just getting started. I have two more musical events this weekend with two different groups. I’m sure by the time this is over I will have played with most of the groups in the region. 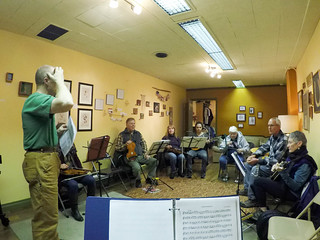 One thought on “Slug Jam in Bellingham”