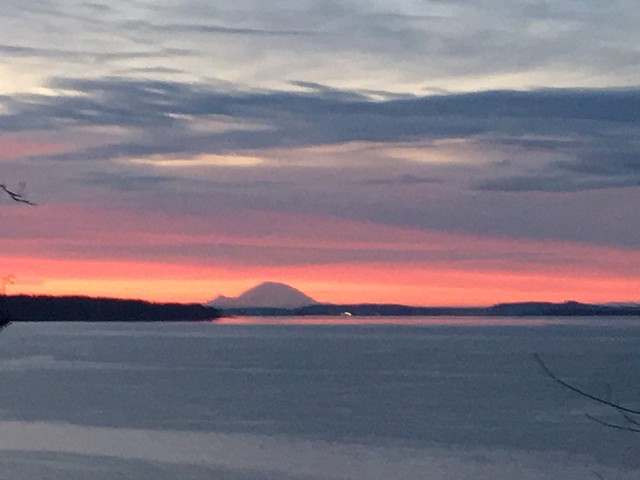 NOTE: I seem to be having a hard time keeping up with the blog lately. Got lots of posts in the hopper, but for some reason I’m not getting them done. I’ll see if I can catch up. Usual excuses – holidays, etc., etc.

December 1 marks three months since we arrived on the island. We have seen lots and done lots, but we haven’t accomplished anywhere near what we had hoped. Things tend to get in the way. I thought I’d give a quick update of the journey so far.

If it seems that most of my posts recently have been about music there are a couple of good reasons for that. I’ve been unable to get out and about to explore with my injured foot and the weather has been downright crappy for weeks. Apart from the music there just didn’t seem to be anything much blog-worthy.

That doesn’t mean that I haven’t been writing. I’ve been using Day One to keep a brief daily journal, often with just a photo to remind me of something and no text. I’ll pull a few things from that journal for this update. At the very least, it will give readers a break from all of the music stuff. Sort of. I’ve got another music-related post in the hopper ready after this one. But until then, here are some miscellaneous thoughts and happenings.

Slowly but surely we’re going through stuff in the house. Laura’s mom saved everything. That’s a characteristic of someone that grew up in the Depression. The outside shed had boxes for everything, and that was one of our targets on the few nice days this past month. We loaded up the back of the Subaru and hauled lots of cardboard to the recycling center. We made only a small dent. 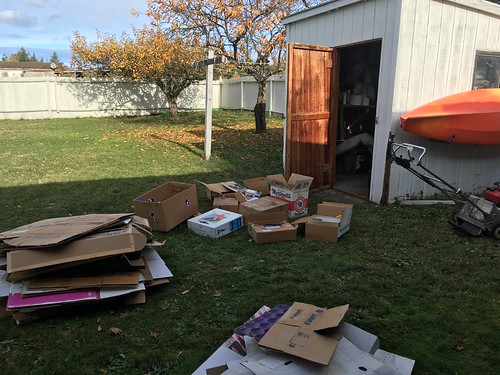 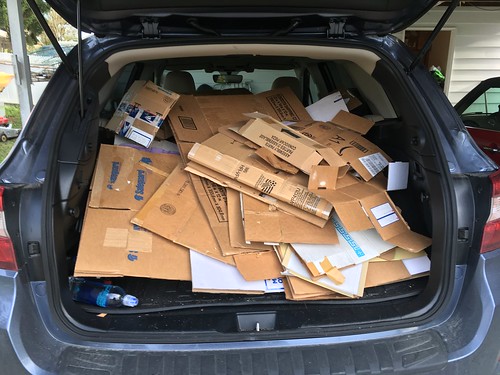 The house here on Samish Island is a 1970s vintage manufactured home, basically a double-wide trailer. We found the deed to the property in a safe deposit box and it included a deed to the house…as a vehicle. It even had a place to list mileage. I would hope that would be zero.

As an older home it has its share of problems. We’ve had a leak over the stove since we got here. I tried to fix it, but in heavier rains my patches just didn’t hold. We finally got a professional to come in and take care of the roof.

Then there was the drainage out front. We’ve had a clogged drain and water running down the road. Both the water company and the county have been out to work on it. When I went out this morning there was a large pool of water and our driveway was a mess. 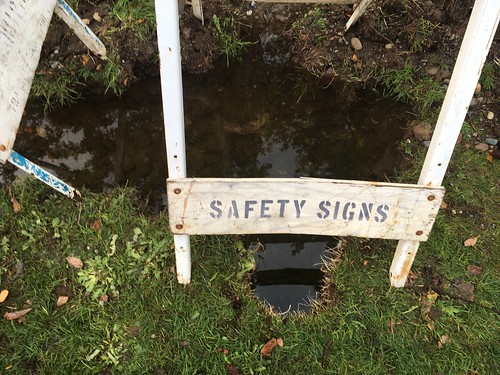 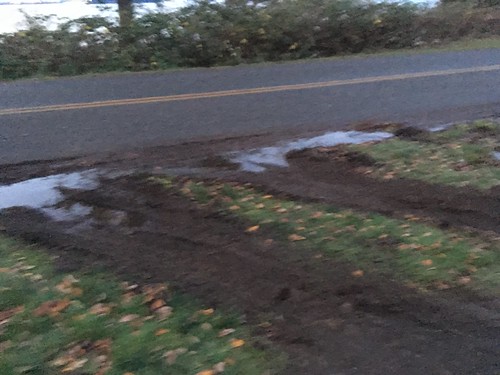 The county promised that they would fix our driveway and when I got home from running errands today they had managed to get the water flow stopped. After taking Laura to the airport I found that they had fix the driveway quite nicely. 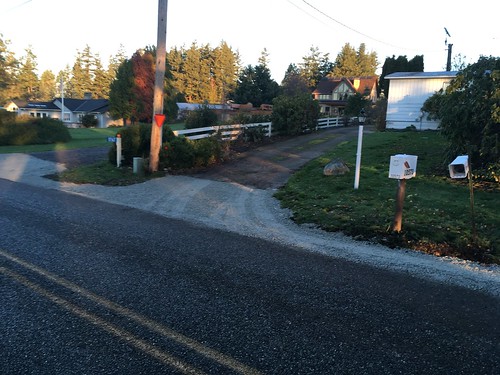 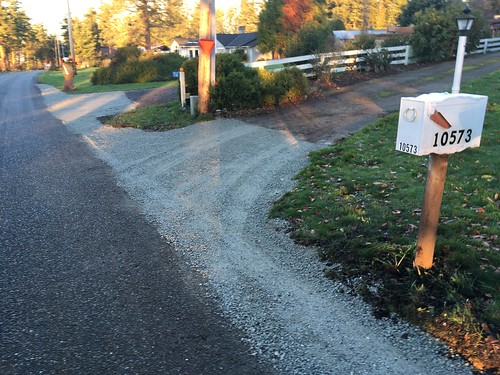 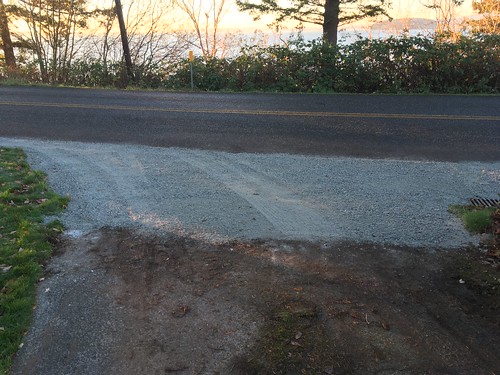 Despite these problems we’ve managed to decorate for Christmas. We have lights up on the front juniper bushes and even put up a small tree. So far the cats have not destroyed it. 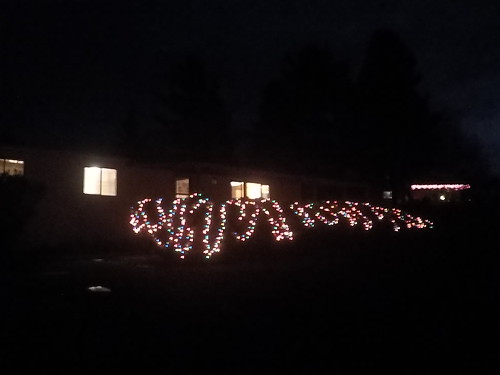 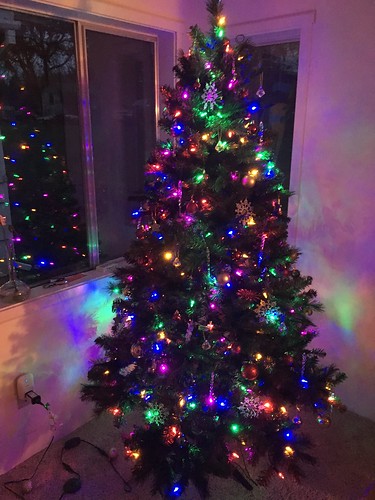 New (to me) Autoharp

I have added to my collection of instruments up here, thanks to neighbors Duff and Linda. Back in November they gave me an autoharp as an early Christmas present. This is one Duff had found in a second-hand store and bought for his kids. It had been sitting unused in a closet and he thought I might be able to get it back into playable condition. 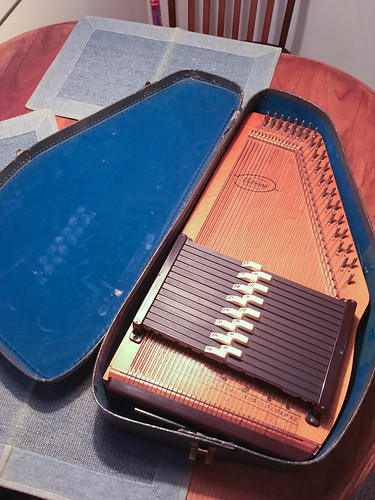 The autoharp was already in excellent shape, so all I had to do was tune it. It sounds great and is super simple to play. I took it to one of our Bring Your Own Instrument gatherings and even played Lady Gag’s “Bad Romance” on it.

This is an Oscar Schmidt 15 button autoharp, probably made in the late 1960s. This model was popular with music educators. I remember playing one as a child and used them as a music teacher myself.

I also learned a couple of other things. First, Laura and her sister Amy took autoharp lessons and their parents even bought them their own instruments. I tried to get her to play this one but so far she has declined. The second thing is that autoharps are apparently very popular up here. Island resident Charlene Day will be playing one at our upcoming Christmas Concert on the island, and I’ve encountered several excellent autoharp players at some of the musical gatherings I’ve attended.

I’ve always been impressed with the close-knit, yet welcoming nature of this island. This was evident in seasonal events that started with a Holiday Kick-Off early this month at the local community center. There were demonstrations on how to make wreaths, hot cider and other goodies, and some local vendors. 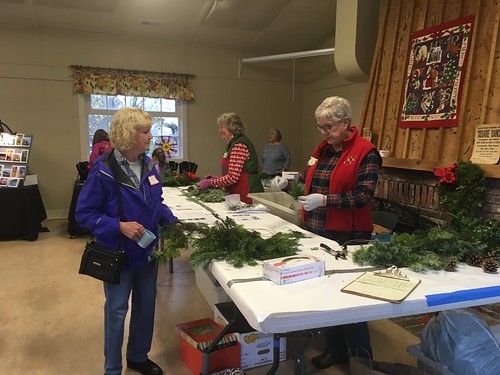 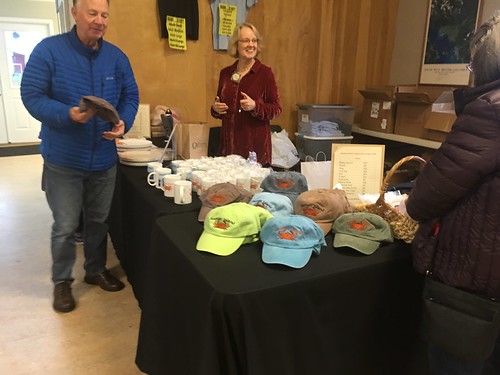 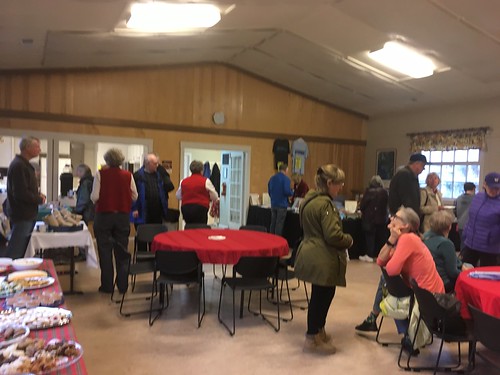 Later that day I had my first rehearsal with the Samish Island Singers. I had intentionally avoided singing with a group on this sabbatical. I knew about several choral groups in the area, but just decided to take some time off. This is a one-shot deal, though. The Samish Island group only rehearses a couple of times for the upcoming Holiday Christmas Program on the island.

We met at the Community of Christ church building on the east side of the island. This building has an amazing view of both Samish and Padilla Bays from its round central entryway. The small sanctuary had been decorated for the season. 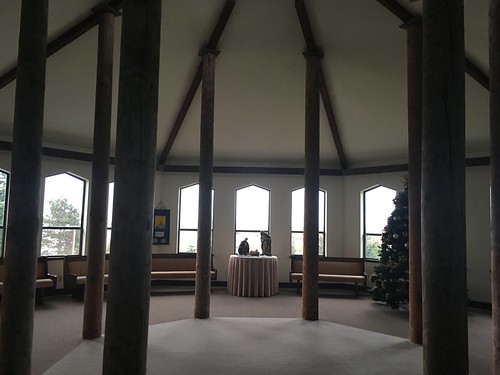 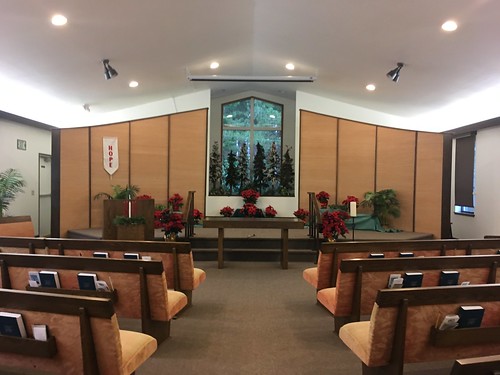 I had to laugh, though. Their organ is a 1970s vintage Baldwin Fun Machine, featuring half-split keyboards and a single octave peddle set. It did, however, have a full rhythm section including the all-important Bossa Nova. 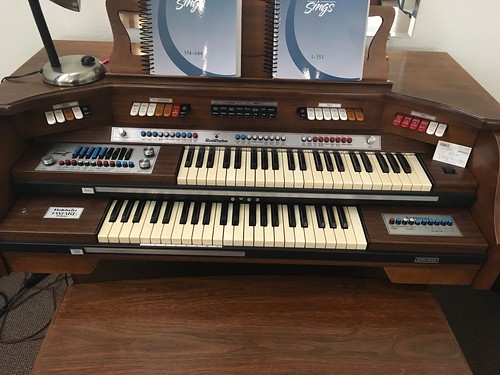 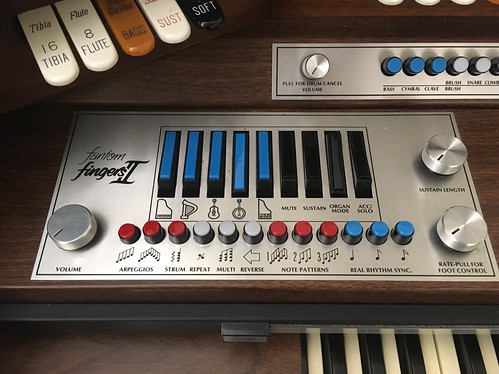 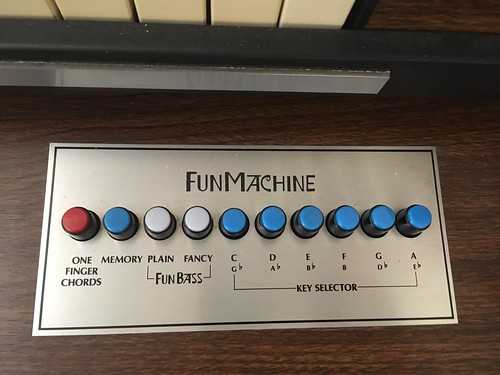 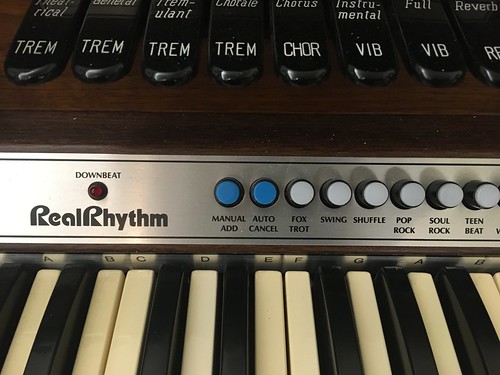 There is a nice Roland piano with an organ setting. I think they use that more than this relic.

The Singers had about 15 people, which is a pretty good size for this community. Peter Blau is the director. We’re doing an old folk song about Christmas trees plus a setting of Jingle Bells to the tunes of The Nutcracker Suite. The concert is December 15.

The past couple of weeks we’ve had clear skies, but most of November was rainy and cold. It doesn’t seem to get as cold as it does back home, but that cold air and moisture permeate everything, especially when coupled with the brutal wind.

Even when the weather seems horrible, it’s variable. The first time I was out here in 1988 I heard the phrase “widely scattered sun breaks.” That’s definitely been the case. When the sun does break through we get some spectacular rainbows. 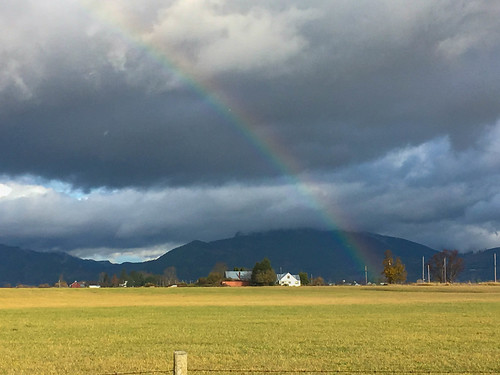 As we approach the winter solstice the days have been incredibly short up here. The sun comes up about 8:00 am and sets just a little after 4:00 pm. 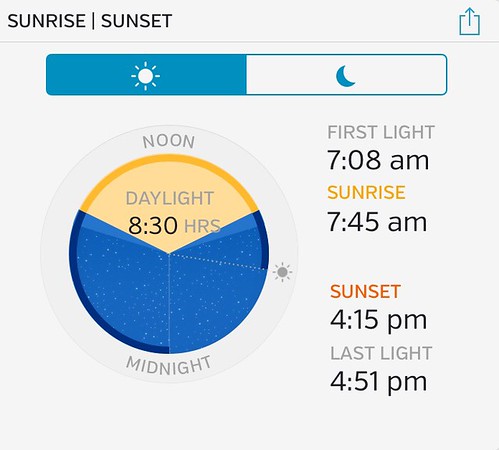 That in and of itself creates some amazing light angles for photography when the sun is out. More on that in a later post. Coupled with nasty weather the short days can get depressing. I understand why Laura’s mom always headed east about this time.

I heard another new weather term – freezing fog. I was out exploring one clear morning and noticed my car slipping a bit. At first I thought there was something wrong with the car. Turns out it was a patch of black ice on the road created by fog freezing. There hadn’t been any other precipitation, so it caught me by surprise. Apparently it caught others by surprise, too. I came across one car that had run off the road and heard about another. The trees and bushes in the colder areas inland look just like they do when we have freezing rain back home. It’s almost like frost on steroids 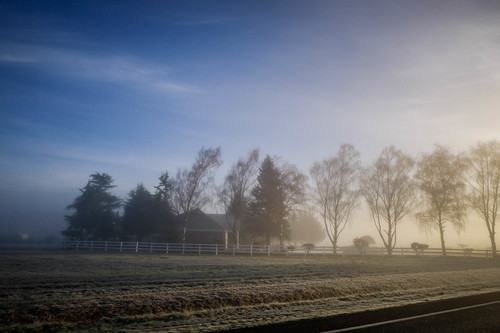 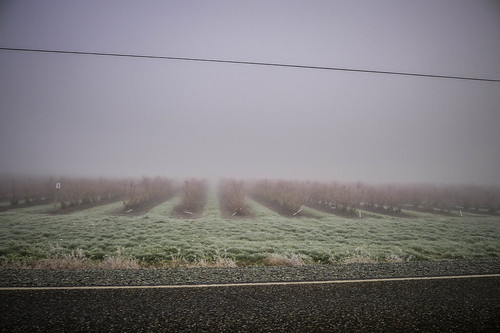 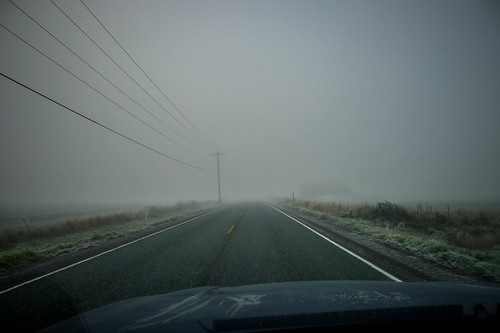 Still lots about which to write. I’ll try to get caught up over the next several days. I have drafts of these blog posts, but just haven’t finished them. Expect a deluge (assuming I get over this writer’s block.) 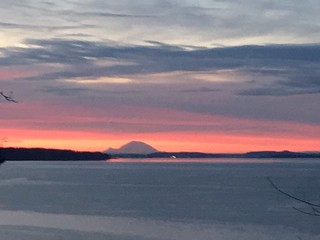 One thought on “The Journey So Far”