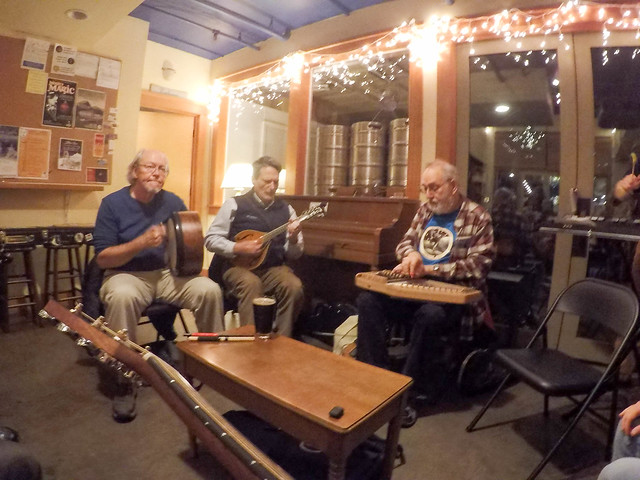 This is a week slam full of music. So far the slate includes another Bring Your Own Instrument, a slow Celtic learner’s jam, a rehearsal with a choral group, and another jam session for Scottish music. Today I discovered yet another Irish music group and decided on the spur of the moment to add them to my already jammed jam session schedule.

Not only have I been seeking out groups that will let me play with them, but I’ve been trying to educate myself on playing styles and technique. One of the best online resources is The Session, featuring tune melodies and lots of other good info. One section lists regular jam sessions from around the world. Out of curiosity I checked out Washington State and I saw that there was a weekly session every Monday night at the Honey Moon Mead and Cidery in Bellingham. This being a Monday morning I decided to give it a try.

I still have to wear this stupid boot because of my injured Achilles tendon. That makes driving a bit inconvenient. I found that I could drive if I take off the boot and wear a sandal while driving. With that in mind, I loaded up my standard complement of instruments – guitar, banjo, and melodica – and set off toward Bellingham for the 6:00 pm jam session.

Finding the venue was a bit of a challenge. I followed my GPS and found a parking space that I THOUGHT was nearby. Given the cool, rainy weather and the fact that I was hobbled I didn’t want to have to walk far. Leaving instruments in the car I walked down State Street in the block indicated by my GPS, but I didn’t see it. I walked a little way down the back alley, but it was a…spooky. I had already walked more than I wanted, but I headed back to the car. Checking the map on my phone I found that it was further down the alley at the other end of the block. I grabbed my guitar and melodica, leaving the banjo in the car, then headed down the alley. There I finally found Honey Moon. 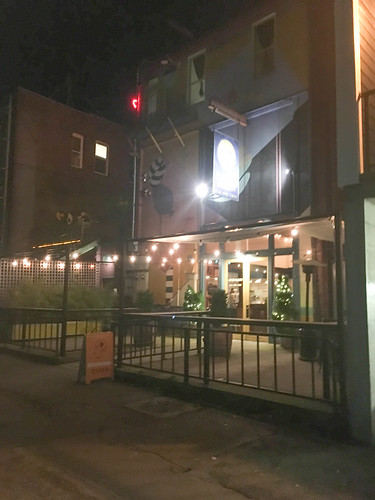 This was a small place. There was a bar, a few tables, and a circle of chairs set up at one end for the jam session. 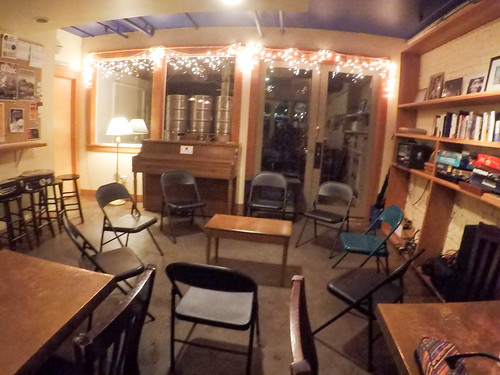 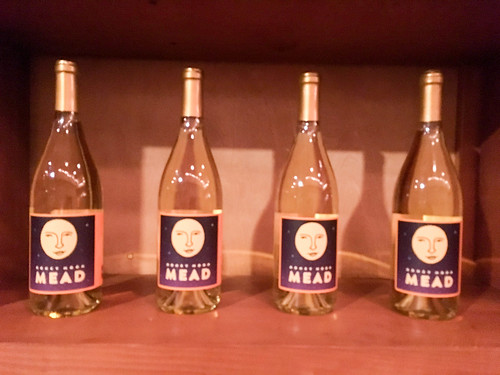 Jan Peters greeted me as I looked about to see what was going on. Jan plays cittern and is the organizer for these sessions. I found a place to put my gear and decided to get some food and drink.

Honeymoon has a very limited menu. They specialize in various types of mead and cider and have only a sparse number of beers available. As for food, it’s purely of the snack and nibble variety. They have a soup, a salad, mac & cheese, and two sizes of charcuterie boards. There are no sandwiches or entrees. 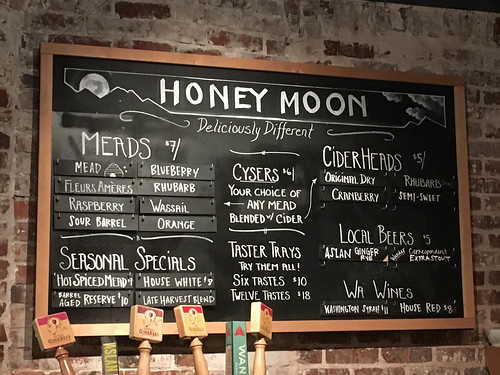 Since I’m not familiar with mead the bartender suggested that I try a sample of their traditional, rather than one of the flavored varieties. It was quite tasty, so I ordered a glass, and since I’d not had dinner I got the mac and cheese. That was enough to keep my hunger in check, and the glass was enough that I could sip on it throughout the evening. 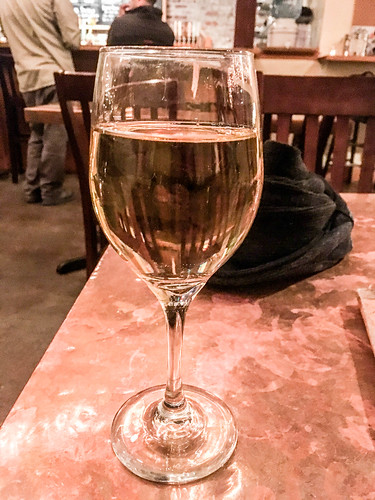 Other musicians began to arrive and set up. As with the last session I attended, each musician typically had a couple of instruments. There were the usual suspects – fiddles, tin whistles, and a couple of bodhrans. One guy had a mandolin, Jan had his cittern, but I was the only guitarist. Even though I had the melodica I figured it wouldn’t make an appearance this evening. In addition to these there were two autoharps and…a glockenspiel, of all things. 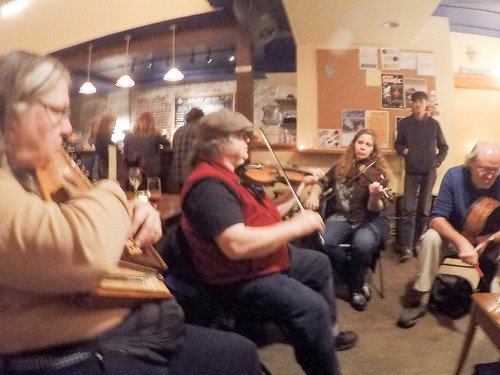 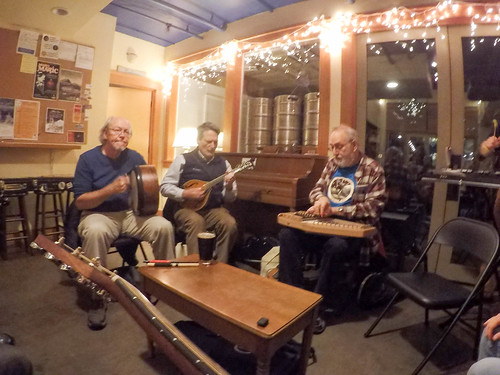 We got underway and my first thought was, “I can do this!” I was able to figure out the chords and keep up with the pace. Boy, was I mistaken. Jan came over and suggested that I play more quietly. I thought back to the other Irish jam session’s rules that guitars should play “under the music,” and hoped that he was referring to that rather than my playing abilities.

However, it only got worse from there…

These guys were great, and the pace picked up considerably. I was completely lost most of the time and just sat back and listened. Here’s one audio sample from early in the session where I felt like I could keep up.

Here’s a bit of video when I just sat back and watched.

The glockenspiel really added to the mix. The guy played it sparsely, not carrying the melody, but adding a bit of ringing ornamentation to whole sound. The guy on autoharp was absolutely amazing. 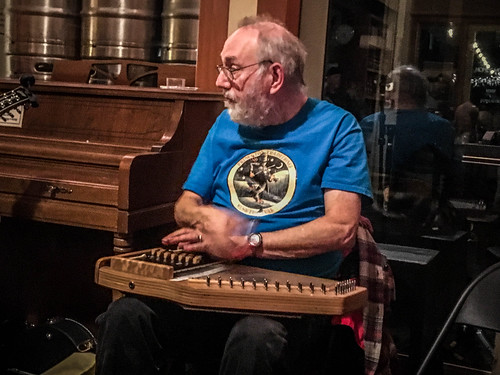 He had a custom built autoharp with wooden inlays and three chord rows. 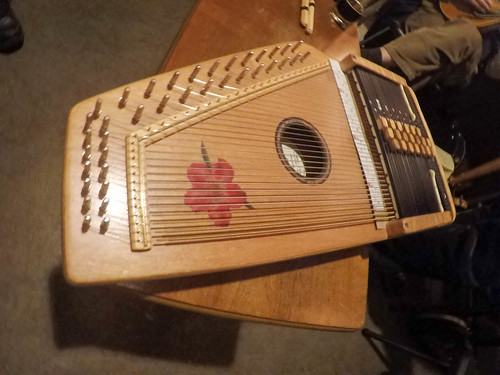 Here is an excerpt of him playing the melody on one of the tunes.

The session format was much like the session at the Littlefield Center last week. Different musicians would start a tune and others would join as they picked up on it. The tune would repeat several times, with a “whoop” or some other indication for the last time through. The leader would then shift to a new tune and everyone would join in again. Sometimes instruments would drop out, then come back in to vary the layering and complexity of the music.

Here’s one more sample from later in the session:

The place filled up with patrons, all listening to our jam session. At 8:00 pm a real Celtic band would set up and provide entertainment until about 10:00. Many of the patrons were here to see them – we were the warm-up act. A couple of the band members joined us for the last sets.

Two things were hammered home. The guitar really doesn’t seem to fit into Irish music. It’s almost as if it’s viewed with scorn, kind of like bringing a Theremin to a Bluegrass session. I also noticed that my instrument was much bulkier than the other fiddles, whistles, and whatnot. The other thing is that these folks have these melodies so well ingrained that they can pick them up with out thinking. This is where the learning and practice come in. Sadly, I don’t play a melodic instrument traditionally used for these melodies. I can play them on my melodica, but it fits in about as well as the guitar. I have several tin whistles, but I haven’t mastered them to the extent that I can play these types of tunes. I’ve never even attempted the fiddle. The bodhran might be the way to go, but they have almost garnered the reputation of an instrument one plays when they can’t play anything else (with apologies to bodhran players who are true artists.)

Despite the frustrations I had fun. It just locked in my determination to learn more of this music. This sure beats the country drivel at the musician’s circles back home. I plan to follow-up on the suggestions to attend a learner’s circle. I do have the “Slug Jam” learner’s circle at the Bellingham Folk School Thursday evening. Apparently there is one at Littlefield but I haven’t seen it on a calendar anywhere. I’ve since found two more – another in Bellingham and one in Anacortes. Having already worn out my welcome in Bellingham and Mount Vernon, Anacortes might be my next target. 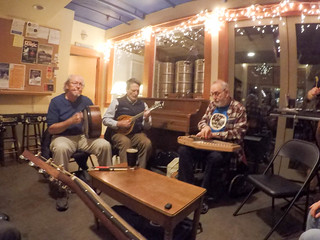 One thought on “Mead and Music”