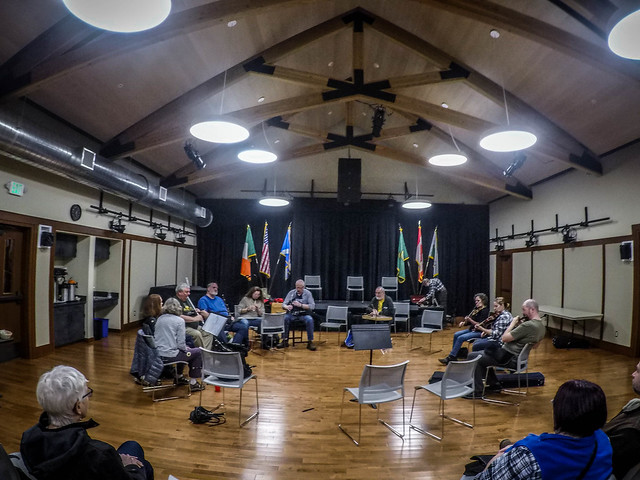 NOTE: I’m still catching up. This post was from a couple of weeks ago.

It has been a week full of music. There was Irish music Monday night, guitar and ukulele Wednesday night, more Celtic music Thursday night, a rehearsal with the Samish Island Singers Saturday morning, and finally a Scottish music session Sunday afternoon at Littlefield Celtic Center. This last session was loads of fun and I’m glad I headed on down to Mount Vernon to see what Scottish music is all about.

I was very curious how different the Scottish session would be from the Irish sessions I’d been attending. Turns out it was quite a bit different, not just the style of music but the format and instrumentation as well.

I was a bit hesitant to attend. I hadn’t done so well with the other sessions I’d attended. Plus, the list of rules for the Scottish session was a bit intimidating.

I put away any trepidation, loaded up my guitar and headed over to the center. When I arrived there were about a dozen musicians in a traditional circle. I was surprised to see so many pipes in the circle. With Scottish music I normally thing of bagpipes, but these looked more like Irish Uellin pipes, which seemed odd. However, these seemed to have a double set of bellows instead of the single normally found on Uellin pipes. Turns out that these were Scottish smallpipes, with which I had been unfamiliar. They have a similar sound to the larger Highland bagpipes, but are more suitable for smaller venues. 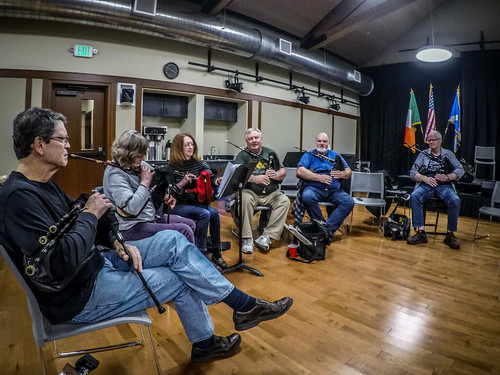 These were the most common at this session, making up over half of the instruments there. In addition Barry, the autoharp player from Honey Moon Mead was there, plus a couple of fiddles and one other guitarist. I had met the guitarist, Paul, previously at the Irish session here at the center.

In addition to the instrumentation, another striking difference was that this session allows music stands and music. I wish I’d known that going in. The rules above mention the “Tartan Top Twenty.” What I didn’t know is that this is an actual collection of tunes in PDF format. Many of the players had printed copies. Paul had it on his iPad and was kind enough to share with me. Having the music in front of me gave me much greater confidence.

As for the music itself there were some differences there, too. There is a quite a bit of cross-over between the reels, jigs, and whatnots in Celtic music, but the Scottish tunes often have a syncopated or dotted rhythm. Plus, the songs of Robert Burns figure heavily into the repertoire.

Here are three other clips from the session. These were sets with several tunes and I didn’t catch the names of all of the tunes.

I continued playing with the group until 5:00. At that point the music stands were put away and the session took on the the format of the Irish sessions. The music was faster and there was less pause between sets.

This was the day of the Mount Vernon Christmas Parade, which started at 6:30. Leaving at 5:00 would also give me time to miss the parade traffic.

I’ve lost count of the number of times I’ve used the words “different” and “difference” in this post. This session was quite a bit of fun and I certainly felt more confident. Having the music in front of me makes all the difference in the world. 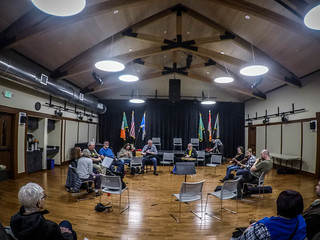