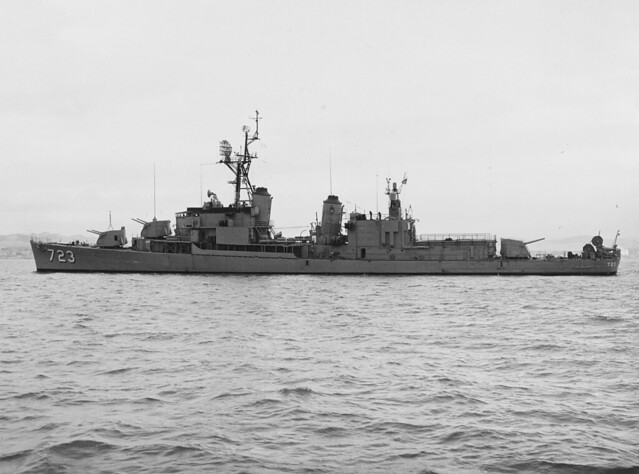 Both my late father and Laura’s father served in the US Navy in WWII. Dad talked a little about doing MP patrols in Paris and being stationed in Guam, but really didn’t talk about the war. Mr. Wright was also reticent to talk about the war. I guess some experiences are just too hard to discuss. Now they are both gone, and those stories with them. However, there is one story from Mr. Wright that was told to Laura, not about WWII, but his later service in the Korean War. It was the story about how his ship, the USS Walke, was torpedoed in the Sea of Japan.

The USS Walke, DD-723, was the third destroyer named for Civil War admiral Henry Walke. The first Walke served in WWI. The second was destroyed in the Battle of Guadalcanal in 1942. The third Walke was commissioned in 1944 and took part in the Invasion of Normandy, then later served in Korea and Vietnam.

The Walke saw plenty of action during those conflicts, and sustained lots of damage as a result of that participation. During the Invasion of Luzon in 1945 the Walke was attacked by a squadron of suicide bombers. Most of the planes were destroyed, but one crashed into the bridge, knocking out communications and killing most of the command crew. Though severely burned and injured, commanding officer Commander George F. Davis stayed at his post until he was sure that the ship would not sink. He died later that day of his injuries.

In 1950 the Jim Wright was getting ready to pursue his doctorate in physics at Penn State. He and Merline were preparing to move to the east coast when he got the call to return to naval duty. Chief Petty Officer Wright was assigned to the USS Walke.

Aboard the Walke, CPO Wright saw action in blockades of Korean port cities, including naval bombardment of gun emplacements in Wonsan. On the night of June 12, 1951 an explosion rocked the USS Walke. It’s still unclear whether or not it was a torpedo or a mine, but something ripped a hole in the side of the ship.

Twenty-six sailors were killed in the explosion and another forty were injured. The ship was listing to port and in danger of sinking. Laura’s father was part of the team tasked with getting the ship out of danger and into a safe port. Through their efforts the ship made it to the port of Sasebo for repairs.

A website dedicated to the USS Walke lists those killed in the June 12, 1951 explosion.

Memorial services were held for the sailors. Several received Silver Star commendations for valor during the incident.

Sadly, the twenty-six aboard the USS Walke weren’t the only deaths attributed to the explosion. Back in Jim Wright’s hometown of Salmon, Idaho, news was received that the Walke had been torpedoed and that sailors had died. According to family history, Jim’s father, Sam Wright, upon hearing the news suffered a stroke and died. I have no idea if there was a direct cause and effect here, but the explosion took place on June 12, and Sam Wright died twenty-five days later on July 7 and the young age of 59.

As for the USS Walke, it lived to fight another day. The destroyer underwent repairs at Sasebo, then returned to the US for a refit. The Walke also saw action in the Vietnam War, and was finally decommissioned in 1970.

So, this Memorial Day I’m remembering the twenty-six sailors aboard the USS Walke who didn’t make it home, as well as the tragedy that took the life of Laura’s grandfather, Sam Wright, himself a veteran of WWI. I’m also remembering and missing my father and Laura’s father, and their service to our country.

More photos of the USS Walke.

One thought on “Remembering the Walke”