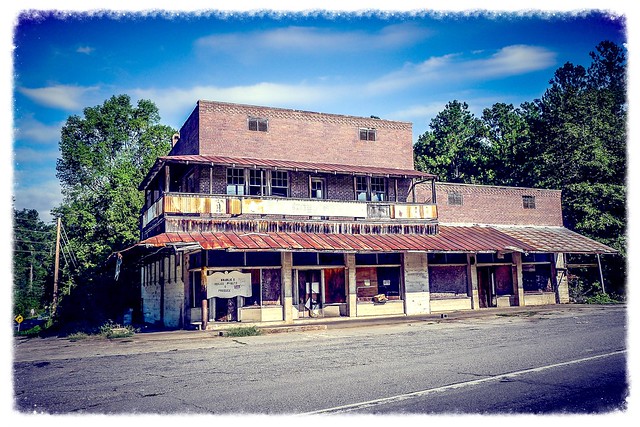 On our recent trip down to paddle the Savannah River I lamented the fact that we couldn’t stop and all of the cool photo ops along the way. We had a schedule to meet and we were running late. Tuesday of this week I decided to take a break from house remodeling to get and explore a bit with my camera, and I was determined to catch some of those photo ops that we had missed.

Actually, this post is just a taste of a much larger project, one that I hope to complete over the next couple of weeks. Even on this outing I had a tighter time crunch than I might have liked, and I still missed lots of things I’d like to have explored further. I would be exploring the land between the rivers – the basins between the North and South Edisto, and the Savannah River.

For this trek I decided to replicate our route from a couple of weeks ago. I headed out early Tuesday morning and drove down to Columbia, where I waited in traffic for nearly 45 minutes. I left I-26 and headed across the South Carolina Sand Hills on US 321, headed southwest. The morning was absolutely beautiful. and I was hoping to get some good shots, even if I didn’t make my entire agenda.

Just past the town of Swansea I left US 321 and took State Highway 3 across country. I passed lots of farmland and interesting sites. Soon, though I reached the intersection of Highway 3 with Highway 178. There I found the E. A. Pool General Merchandise building. 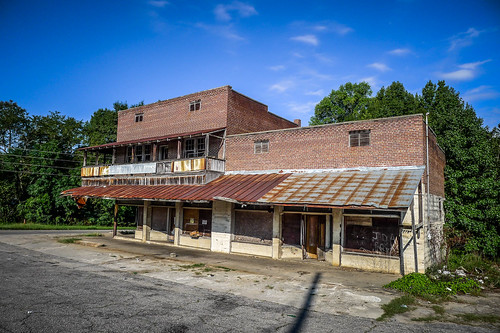 This store is pretty much out in the middle of nowhere. According to a historical survey of state country stores…

E.A. Poole General Merchandise is an example of a two-part commercial block form. Constructed circa 1900 at a rural crossroads in Lexington County, this 2 ½-story brick masonry country store was originally associated with a mill. The size of this country store alone gives it a command over the rural intersection. With a corner and two street-facing storefronts, this rural store has become its own small Main Street. Recessed entrances and angled and transom fixed commercial windows, paired with a wrap-around balcony, two gas pump islands, and brick parapet construction reflect both original and added elements not typically reflected in rural country stores.

Another “abandoned aficionado” noted that there were separate entrances for men and women. I would guess this would allow access to those clothing departments, rather than try to keep the sexes separate. Here’s a photo he took…

I was surprised that the store isn’t on the National Register. Seems like it would be. Across the street is Ebenezer Methodist Church. The building appeared to be 20th Century, but also looked like it had a historic cemetery. However, I still had a schedule to keep, so I didn’t explore further. I continued, just beyond Poole’s Store crossing over the North Edisto into Orangeburg County. Several churches looked intriguing, but I didn’t stop.

I reached a sign for the town of Springfield. I remembered from our previous trip that we bypassed the actual town. I decided I wanted to see it this time, so I took Business 3 toward town. Here I made another discovery. A building with unique architecture caught my eye. The fact that there was a sign that said “Community Center made it even more intriguing. 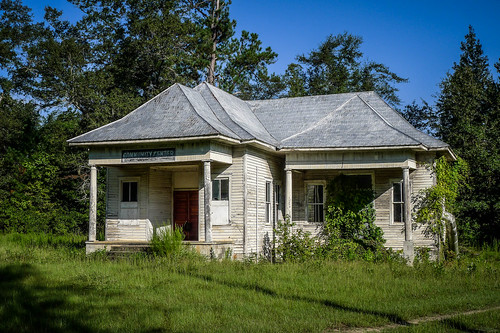 To me, “Community Center” implies “old school.” However, I the architecture looked more like a house than a school. 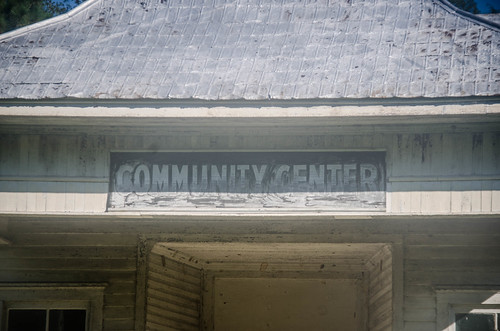 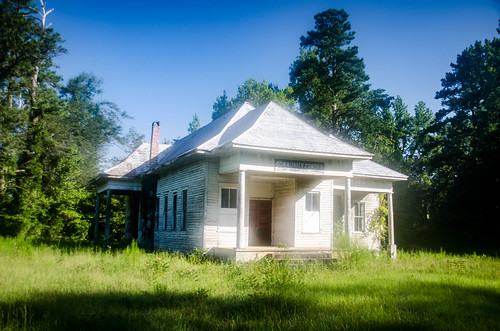 The door was locked, but I held up my camera for an interior shot. The image caught glimpses of an open room with long windows, much like a classroom. 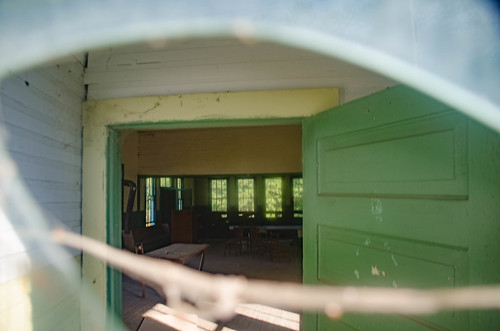 I was intrigued. Back at home I checked the GNIS data, but it showed now schools at that location. I did find a YouTube video of another UrbEx explorer who got inside. The video doesn’t really give anymore information, but the images do make it look like classrooms.

I posed the question to the Abandoned Places in South Carolina Facebook group. A friend suggested that I ask Harry Brown, a Springfield resident who had posted a photo of the building on FineArtAmerica.com. Through e-mail, Harry said that the school was called the Goodland School, and had been moved to this location.

Armed with that knowledge I was able to locate the school in Google Earth. It had been several miles to the east. I was also able to find the school in the South Carolina School Insurance archives.

I decided to check Chronicling America to see if I could find any news of the school. I spotted several references in the Times and Democrat of Orangeburg. The most intriguing of these was an August 15, 1911 article. It stated that $1400 had been allocated for construction of a new building, which I’m assuming to be this one. The article states that the new building would be ready by October, so that puts construction in 1911. 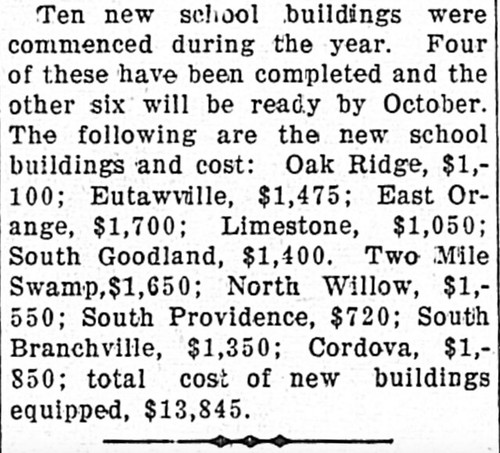 Springfield was an interesting little town along a railroad. There were several interesting old pictures, but I didn’t pause for photos. The same mantra kept running through my mind – “I’ve got to get back down here and spend more time.”

I continued on Highway 3, headed toward the Savannah. Past Springfield I crossed the South Edisto River into Barnwell County. Soon I spotted a brown sign that said “Healing Springs.” I decided to check it out.

The Healing Springs were one of many Artesian wells in the area. This particular spring gained the reputation for its medicinal properties with the Native Americans. One story says that wounded British soldiers were miraculously healed during the Revolutionary War. Regardless of the merits of these tales, people still come to the springs to collect the water. 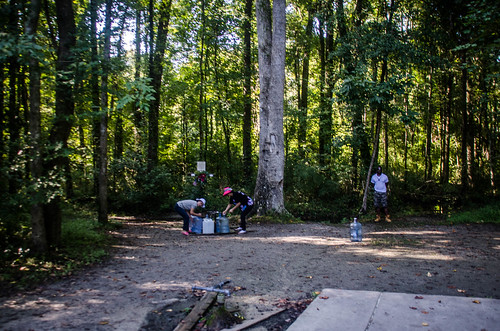 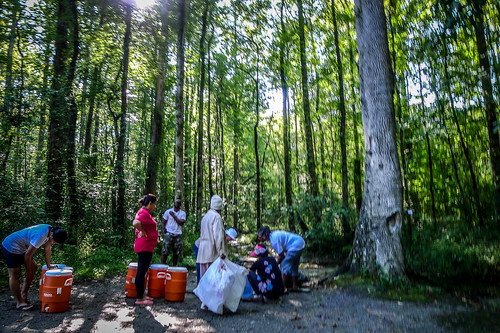 The last owner of the springs, one L. P. “Lute” Boylston deed the property to “Almighty God” in 1944, hence the name “God’s Acre.” Some have speculated this was a shrewd move to avoid taxes and upkeep. Whatever the reason, the Department of Health and Environmental Control tests the water for coliform bacteria and radon. So far, no problems.

I spoke with one gentleman who was filling jugs. His one repeated mantra was, “You gotta have faith!” 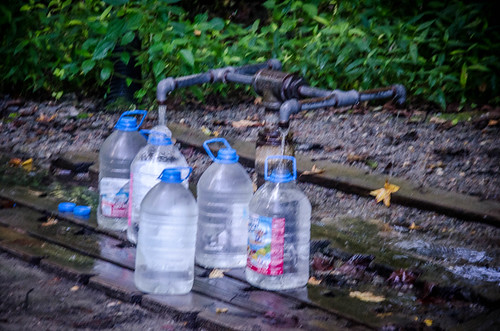 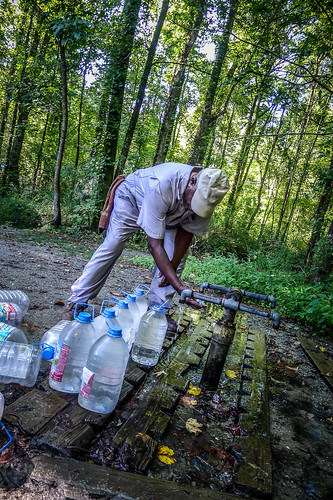 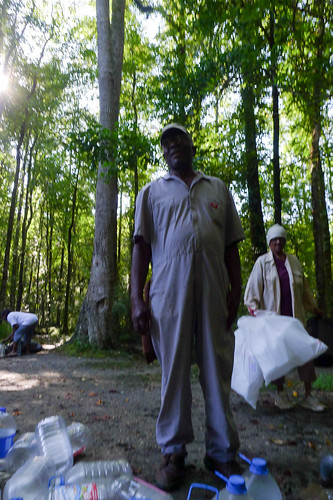 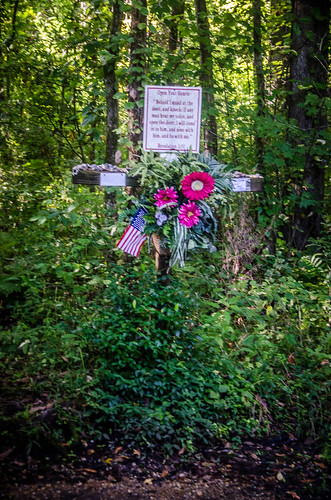 I watched as more people arrived. Soon it became apparent that my parking space was needed by those seeking the healing waters. I left, driving past the Healing Springs Baptist Church nearby. 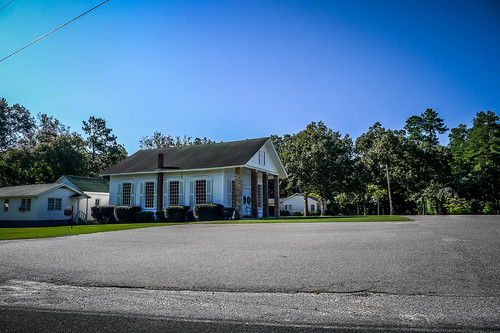 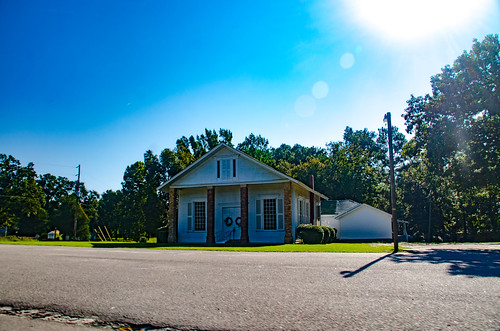 Continuing down 3 I reached the town of Blackville. Like Springfield, this is a small southern town built up along a railroad track. And, like Springfield, it has some interesting architecture. 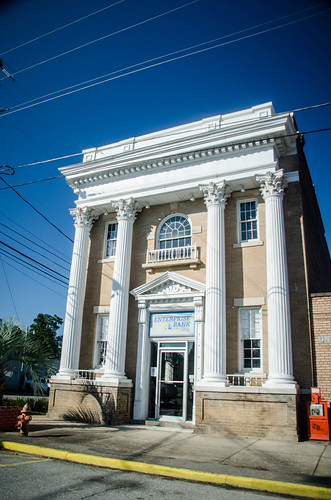 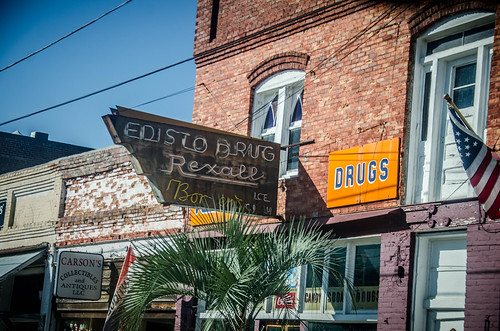 One of the most interesting buildings was the ruins of the old Shamrock Hotel, closed since the 1960s. 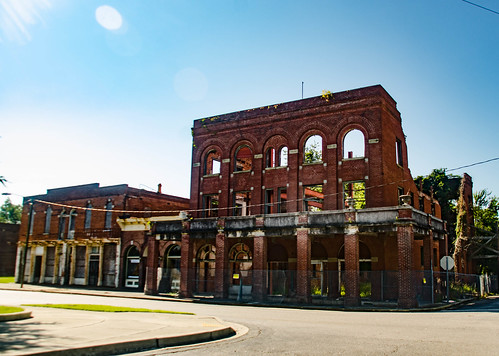 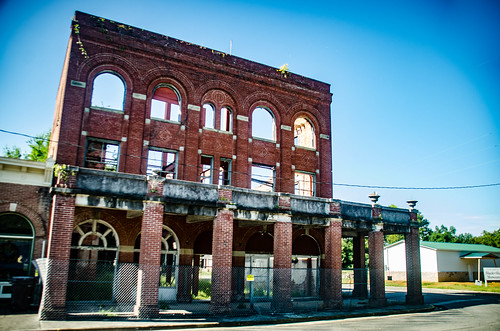 My day was just getting started. However, before I can write about that, I need to lay a bit of groundwork. So, the next couple of posts will be more historical. Stay tuned. 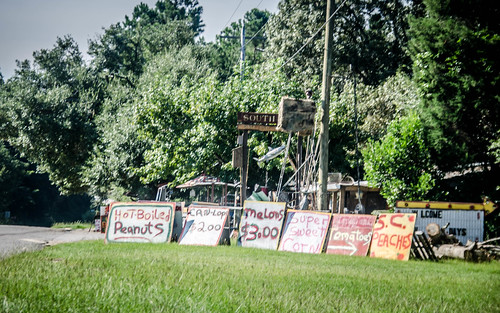 One thought on “Rambling between the Rivers – The Edisto and Savannah”