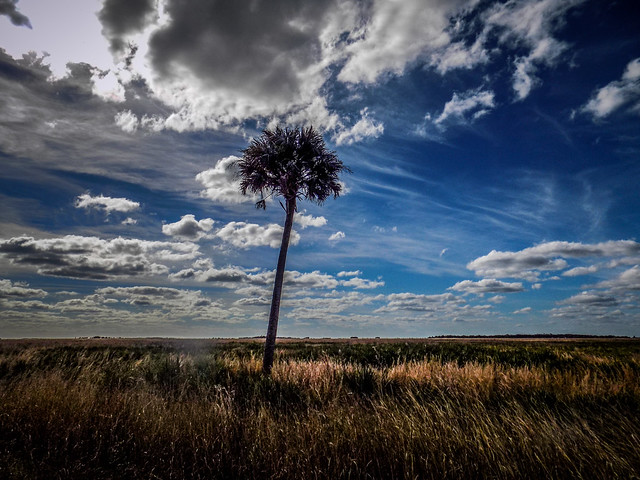 I’m still trying to catch up after a whirlwind holiday travel season. Given our upcoming activities, I’ll probably be trying to catch up for the next month or so. Regardless, while we are in Florida we like to get out into nature as much as we can. This holiday season we were able to visit Kissimmee Prairie, the Stick Marsh at the Sebastian River Preserve, and several beaches.

It was an absolutely stunning day when we made it out to Kissimmee Prairie, north of Lake Okeechobee. We started with a picnic at the ranger station, then flew kites in a field across from the station. I started with my parafoil and the wind was so strong that it almost got the better of me. My arms were quite tired. I switched to a smaller stunt kite without as much pull.

From the ranger station we drove back to a walking trail to explore. This area was lined with waterways, and on this particular day these were filled with alligators.

Laura and Amy were hesitant to walk along the path, especially with Luna on a leash as gator bait. Even so, the scenery was quite dramatic. I was now wishing I’d brought my GoPro to set up a time-lapse to capture the movement of the clouds in the wind.

We took a leisurely route home. At one large farming area we spotted a huge flock of sandhill cranes. These reminded us of the snow geese that would migrate through the Skagit Valley, and made us somewhat homesick for that area.

We also saw a crested caracara and a couple of meadowlarks, but I was unable to get photographs of those.

This year we celebrated 30 years of marriage, a major milestone. On our anniversary we drove up to Sebastian and had a nice lunch at Capt’n Hirams on the waterfront.

From the town of Sebastian we headed inland along the Sebastian River. At Fellsmere we headed north and into the Stick Marsh area. There is a birding trail with access deep into the marsh area. The road is only open on Thursdays, and since this was a Thursday, we were lucky.

We drove slowly, pausing to observe the wading birds on either side of the dirt road.

The last time we were here we came across a field of spoonbills. While we didn’t find the large numbers we had on previous trips, we did see a few. Every now and then we would catch a glimpse of brilliant pink through the eponymous sticks of the marsh. This one wandered out of the sticks and into the range of my camera.

The road continues between two large lakes to the east and west. The GPS map made it look like it would connect with another large road, but a sign said that motor vehicles were not allowed further. We had to turn around. Along this route we bothered an osprey trying to have a fish picnic along the road.

I convinced Laura that she should be taking photos with the camera Amy gave her for Christmas. She took a few.

We did a couple of trips out to beaches, both times with kites. We made one trip up to South Hutchinson Island and had a great time flying kites. Once again I came to the conclusion that stunt kites are not for introverts. You attract attention. All three of us had stunt kites flying and we were so busy with them that none of us took photos.

We also made a trip out to Avalon Beach on North Hutchinson. This had been one of Mrs. Wright’s favorite stops. Sadly, we got there just as the park was closing, so we didn’t get to explore or walk very much. Still, it was nice to get out and see the ocean.