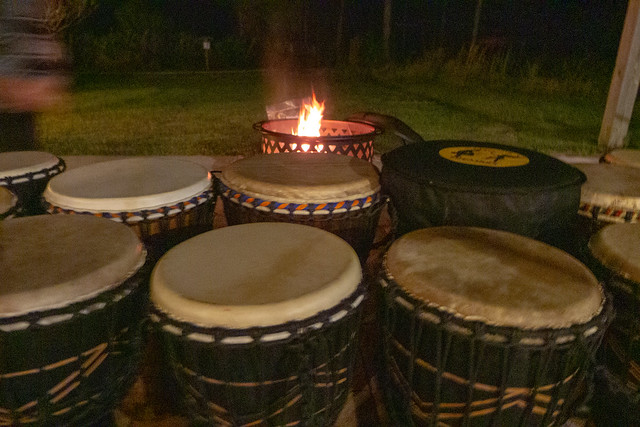 The Christmas Dinosaurs have been put away and the trees taken down. We’ve been catching our breath before ramping up for the next round of madness. The past couple of weeks have been a whirlwind. There were paddle trips, swamp outings, drum circles, and we even celebrate a major milestone. All of this, while wrapping up 2018 and seeing in 2019 in grand fashion. Over the next several posts I’m going to try to summarize the Winter Holiday happenings.

Amy spotted in the local Fort Pierce paper that The Savannas Preserve Park just south of town would be hosting a solstice drum circle. Since I had lugged my djembe all the way down to Florida it seemed like it would be a good thing to do.

The Savannas Preserve Park hosts four drum circles each year on or about the solstice or equinox. These are hosted by a guy calling himself Kevin Beatkeeper and Shamana [sic] Hoa-Che-Tahna Spiritwind [sick] (aka Alana Murphy.) I was skeptical, but still up for a good bit of drumming.

We arrived early. Amy and Laura sat behind as spectators while I took my drum down to the circle. A large moon was rising over the grasslands.

Shamana Alana was sick and couldn’t make it. Kevin Beatkeeper had hosted an all-night drum circle for the actual solstice and didn’t have much of a voice left. Even so, he did a great job leading the group. Kevin introduced some simple Ayoub patterns followed by Con Claves.

Kevin had half the group do the Ayoub beat while the other did the Con Claves. Con Claves might be recognizable as the “Bo Diddly Beat”, the rhythm used in most of Bo Diddley’s songs. The two rhythms are from different cultures, but complement each other.

After the instruction we started sustained drumming selecting either of those beats. Kevin switched to dunun drums to lead the beats. There were some experienced drummers who occasionally improvised, myself included. It was quite fun.

Here’s a bit of video from the evening…

We even had a belly dancer join us. It being somewhat chilly, she didn’t wear the traditional garb. She had some young boys join her and she tried to give them instructions, much to their father’s chagrin.

I tried to get Amy and Laura to join in, either drumming or dancing. They preferred to stay on the sidelines and observe.

The session lasted for two hours but I could have kept playing for much longer. I was having a blast. I was glad I had lugged my djembe all the way down to Florida.