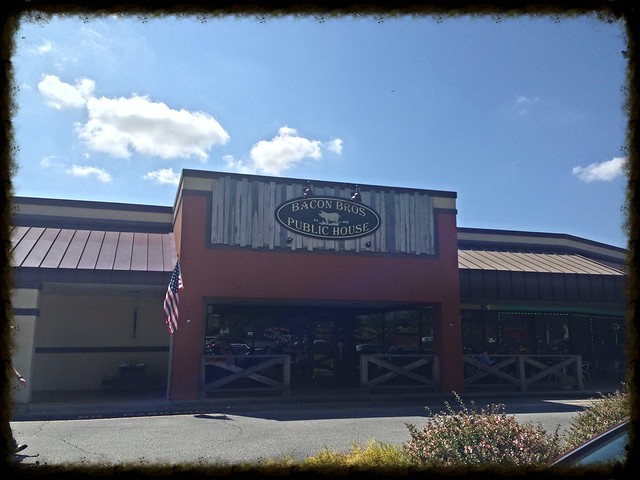 It’s been awhile since I’ve done a restaurant review. It’s a bit more difficult when you’re not eating out as much, and you’re trying to watch your weight. Even so, today Glynda wanted some company for lunch, so we decided to try a new place, Bacon Bros. Public House.

I’ve heard good things about Bacon Bros. Several of my friends have visited and said that the food is excellent. The stories were that all of the recipes have bacon in them. Well…I guess that’s technically true. After all, anything with bacon must be excellent, right? We were here to get to the root of those stories.

Bacon Bros. is a locally owned restaurant, and opened last year. According to the restaurant’s website…

Serial entrepreneurs Eric Bergelson and Mike Porter, along with Chef Anthony Gray and Jason Callaway, are the Bacon Brothers. Porter and Bergelson decided to branch into the restaurant business and teamed-up with Gray and Callaway in 2012. In one of their early meetings, Callaway brought bacon he had fried that morning at home and transported it in a mason jar that he placed in the center of the table where they were gathered. The four men started snacking and talking about their love of bacon. As the pieces quickly disappeared, they realized they had a concept and name for their new restaurant.

The restaurant is located on Pelham Road, near “restaurant row,” in the same area as EarthFare.

I usually take “public house” to mean a bar, and I think an English pub is the decor for which they were striving. Everything has a rustic look to it. There are picnic tables outside, and exposed rustic wood inside. 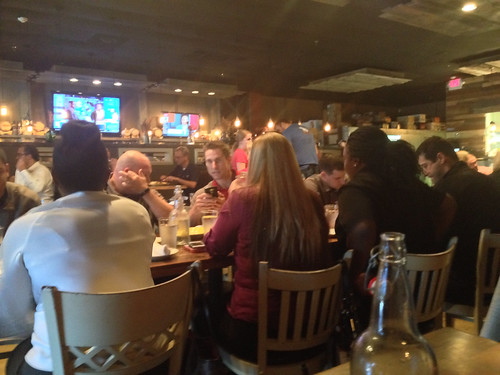 The place was filling up for lunch, so Glynda went ahead and got a table before I got there. We were seated next a large table of Verizon employees out for lunch. It was loud and conversation was difficult.

Behind the restaurant was a deck around with outside seating. To get to it, one must walk past a curing room, with all sorts of pig products. 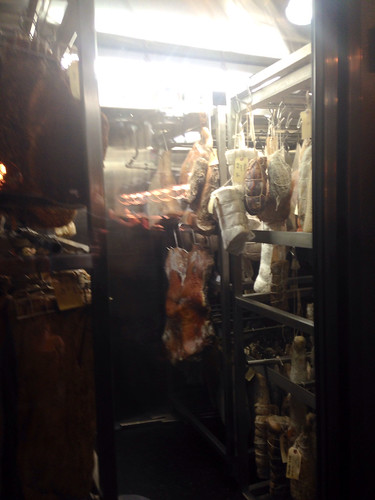 I guess the best way to describe the cuisine as Southern classics dowsed with a heavy dose of “chef-iness.” Contrary to what I had heard, not everything has bacon in it. However, almost all of the menu items have some sort of pork product. Selections start with a “Meat Board.” This is a collection of deli and other meats sold by the ounce, including salami, pancetta, liverwurst, prosciutto, and head cheese.

Appetizers are listed as “snacks and include oddities such as boiled peanuts, fried pickles, and tater tots. These run from $5 to $8 for most.

There are three salads, but why would anyone bother with salads here?

A selection of sandwiches run from $8 to $12, including a Reuben, pulled pork, a burger, and a BET – Bacon, Egg, and Tomato with a duck egg.

The entrees include crackling pork, shrimp and grits, and fried catfish. There is also a selection of barbeque pork options. These run from $14 to $22. However, there’s a catch…

Unless specified, I don’t think the entrees come with any sides. Those will set you back another $4-$5 per side. Looks like this could get VERY pricey very fast.

Oh, these pesky diets and limited retirement budgets…I would have loved to have loaded up with some of the signature dishes, but decided to go with a sandwich, instead. Glynda and I both got the Reuben. 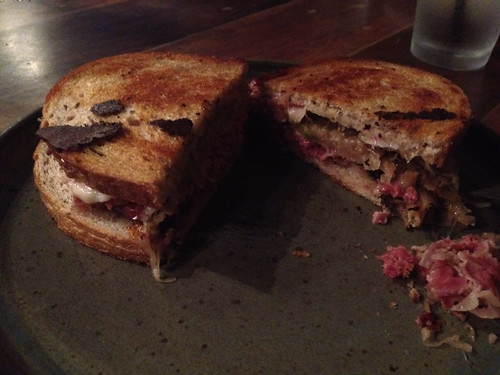 It included the requirements – pastrami on rye with sauerkraut and Thousand Island dressing. A helping of red cabbage was included on the sandwich for a bit more color. Glynda and I both thought the meat on the sandwich was fantastic. Stands to reason for a place known for its meats. Overall, though, the sandwich was lacking. It was very dry, and could have benefited from a tad more sauerkraut or dressing.

We also ordered a side of fries to split. This came out as a whopping serving in a bowl that we placed between us. 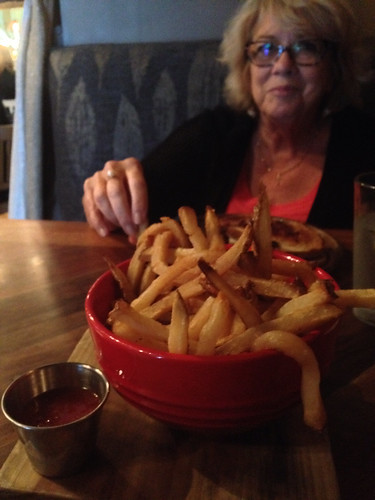 The fries were OK, but got very soggy toward the bottom of the bowl. The fries were served up with some of BBPH’s own ketchup. This had a hint of heat and vinegar to it, and I found it to my liking. I’ve been known to mix ketchup and balsamic vinegar, when available. The waiter said that it also had some chipotle and cayenne in it, which explains the heat.

About the best way to describe it was lots of flash, but little substance. For example, the simple delivery of a straw for our drinks involved some sort of weird napkin origami where the waiter never touches the straw. Right before our meals arrived, knives were delivered to us in a box, similar to those containing dueling pistols. We used these precisely once – to cut our sandwiches in half.

Where things mattered, though, service was a bit lacking. It was slow overall. Not terrible, but just enough to get to the point where I wondered, “Where is our waiter?” one too many times. Granted, it was a busy lunch service, but the place wasn’t packed. There seemed to be plenty of wait staff on hand, including one giant with a long beard.

While the novelty of a bacon oriented place has tons of appeal, I was not impressed. The sandwich could have been much better, and service was so-so. Add to that very high prices, and this is a place I don’t think I’ll visit very often. However, in fairness to Bacon Brothers, I didn’t like The Lazy Goat the first time I tried it, and now it’s one of our favorites. I would like to come back and try one of the entrees at a leisurely dinner and see if my opinion changes.

One thought on “Pigging Out at Bacon Bros”