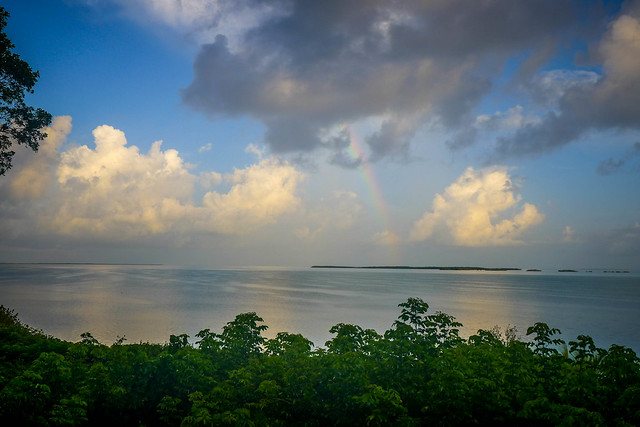 It’s been a stressful few weeks. We have been making trips to Florida to help out with Laura’s mother. While I’ve been able to make the trip to Ireland, Laura hasn’t had a vacation. So, on this latest trek down to Florida we decided to extend trip a few days and head down to Key Largo for an escape.

We drove down on a Monday. The drive from Fort Pierce to the Keys is not the most exciting stretch, until you reach the end of the Turnpike. There, US 1 takes over, and the two-lane route leads over wetlands and mangroves. While beautiful, the area is fenced, and there is nowhere to stop. Eventually we reached the bridge crossing Blackwater Sound and arrived at Key Largo.

Our room wasn’t quite ready, so we had some time to explore. As we drove down coastal highway I could have sworn that we passed the same weathered old denizen of the Keys multiple times. If it hadn’t been for subtle differences I would have sworn that it was the same person. There was always dirty, stringy, long blonde hair and deep creased tanned skin. Sometimes it was a woman, and sometimes it was an aging surfer dude. There was always a bicycle. It was a bit creepy.

In contrast, our room was luxurious. We had views westward across the Gulf of Mexico. We opened the sliding doors and watched as an afternoon storm rolled by. 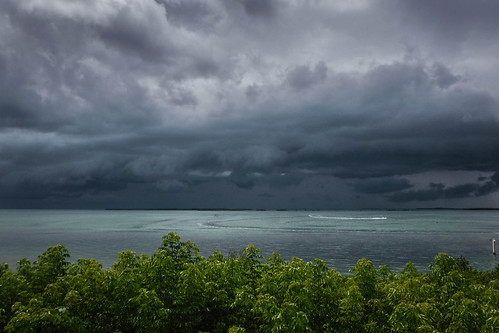 When the rains stopped we set out to explore. The resort had a nice beach area along the gulf, and a place to rent various water sport gear. The pool area was on the other side of the hotel. The pools were smallish, but there were two of them – an upper pool for families and a lower one for adults. We took advantage of the lower pool with its cascade. 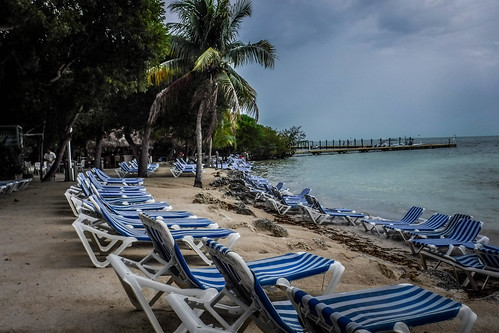 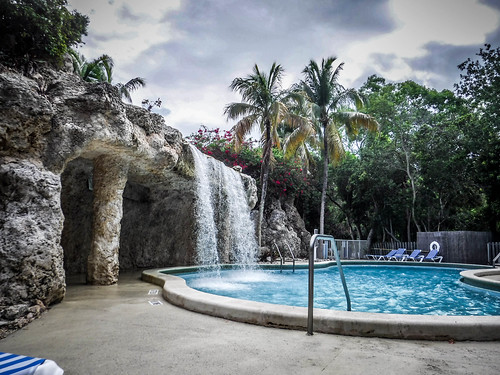 Dinner was excellent, but quite pricey in the hotel restaurant. We watched the sun set into the Gulf through a thick layer of clouds. 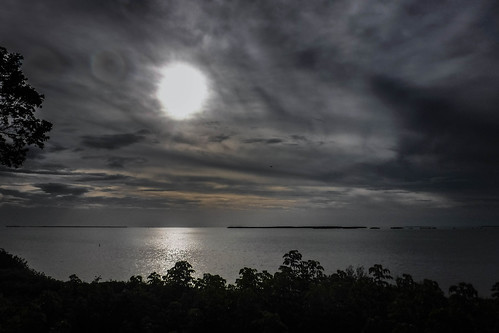 Laura’s plan was just to camp out at the pool. I jokingly said we could have had a much less expensive holiday by getting a room at the local Embassy Suites. However, I wouldn’t have been able to accomplish my objective for the morning, which was to kayak out to the smaller keys visible across the channel.

I left four kayaks back at Amy’s house in Fort Pierce. Despite being surrounded by water, I hadn’t brought a single boat down with me. We had called earlier, and the resort said that they couldn’t provide a place to keep the kayaks secure. I didn’t want to leave the boat on top of my car, and I certainly couldn’t keep it in the room. That meant I was stuck with whatever they had available for rental.

That turned out to be a sit on top that paddled like a bathtub. It did have one redeeming feature – a Plexiglas viewport in the bottom of the kayak. 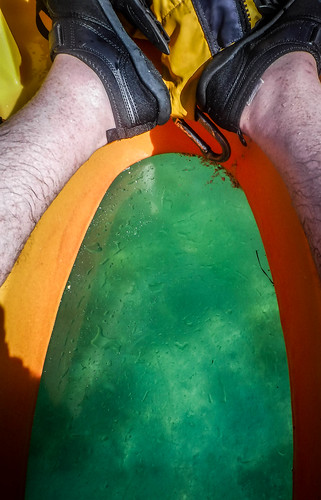 It was an absolutely beautiful, but hot day. I was determined to make out to the small spoil islands, and if possible, the small keys beyond. 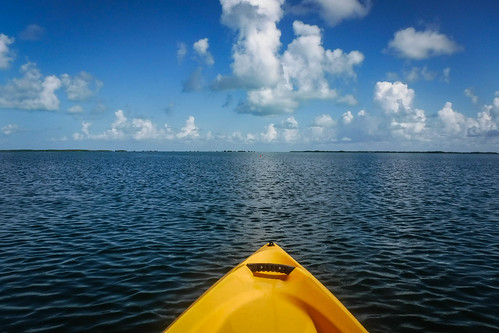 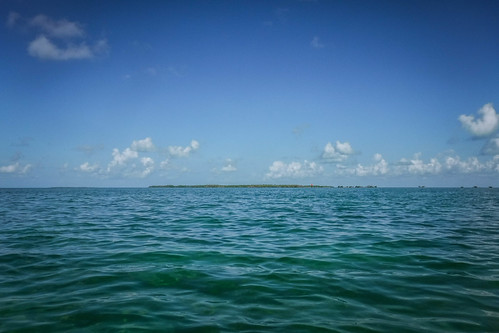 In addition to being an inefficient kayak, the viewport proved to be a distraction. I’d stop paddling and float along to see what was down below. Unfortunately, I also splashed lots of water onto the port while paddling, and that created obstructions. Before I knew it I was coming up on a channel marker, then realized is was the wrong marker. I thought I was coming up on the near side, but as it turns out, I was in the middle of the channel. Fortunately, this one doesn’t get the traffic that the Indian River gets, so I was OK. I scoot on through and headed toward the spoils. 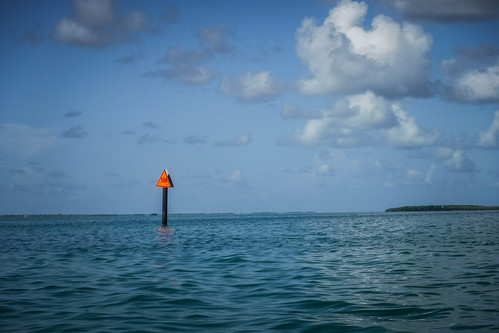 The spoil islands themselves were very different from the ones in the Indian River. These were shallows with a silty base, held together with mangroves. I tried to step out, but my feet sank into the silt. When I got back into the kayak I splashed milky liquid all over the viewport. Oh well. An osprey kept watch with a fish he had caught. 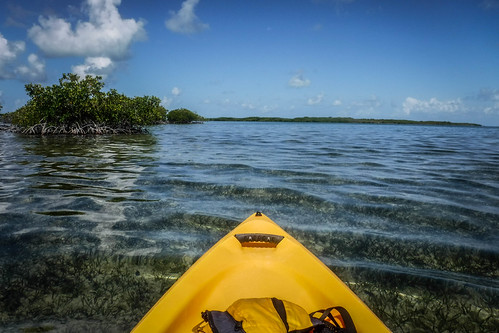 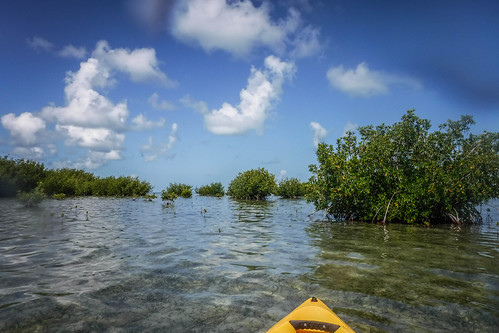 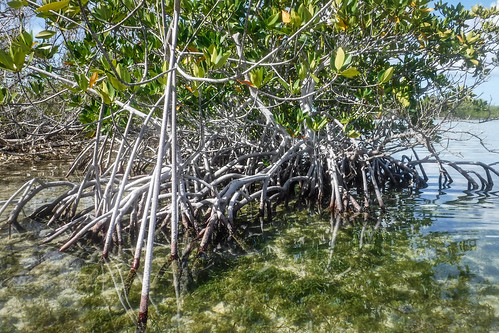 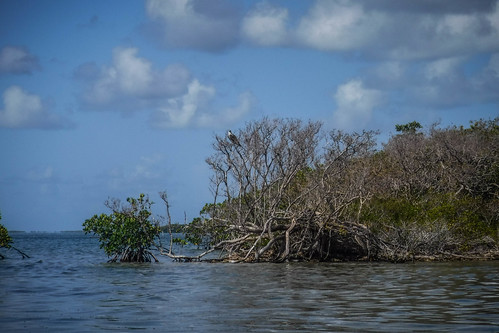 I could see fish, anemones, and coral down below. I hadn’t brought my GoPro, but I held Fuji the waterproof camera under the water for a couple of shots. 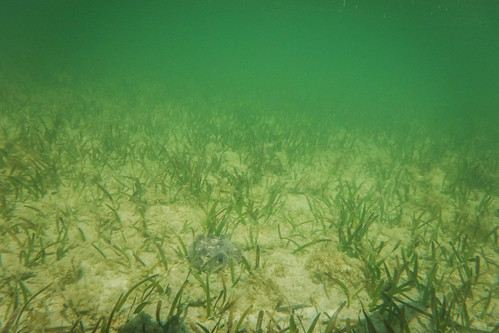 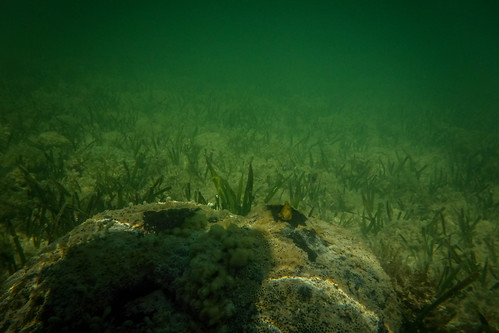 The next Key was further off than I had thought. I could have made it quite easily, but I was on a bit of a time crunch, what with rental fees and all. I started to make my way back. That also proved a bit longer than I thought. As I approached, activity increased along the beach behind the resort. There were other kayaks and stand up paddle boards, but none venturing out as far as I had. There were also jet skis zipping about. I decided to give them a wide berth. 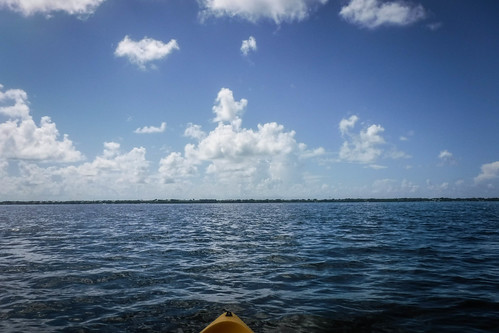 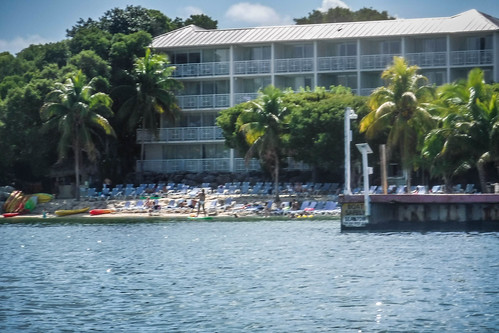 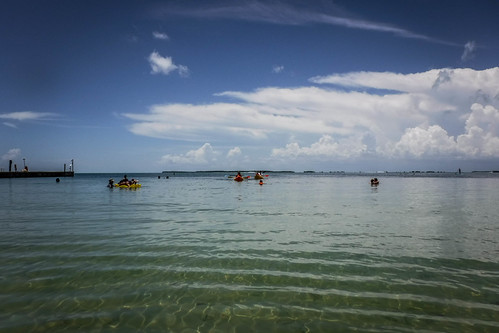 I joined Laura at the pool where she had been all morning. There weren’t many people out at the lower pool, so we set up camp for the rest of the day. Lunch was from the local snack bar, as were some very tasty drinks. 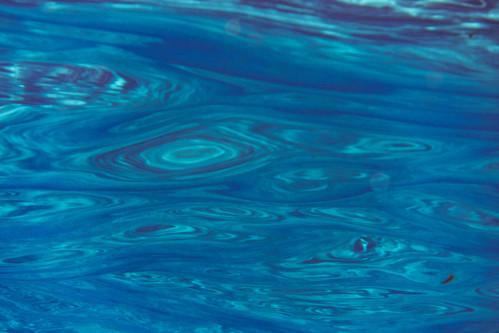 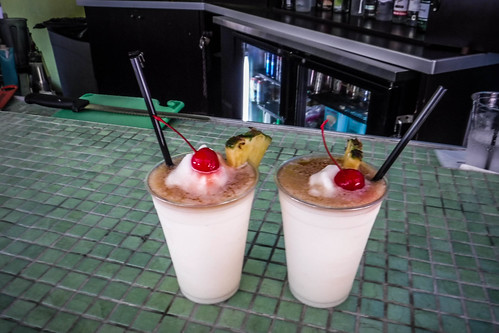 Dinnertime came and we were in no mood for more exorbitant prices at the resort. Instead, we headed into Key Largo and found a place called Sharkey’s. It was out of the way, but had great food at a fraction of the cost at the resort. We watched the boat traffic along the channel just below the joint while we ate.

We made it back in time to catch a spectacular sunset. 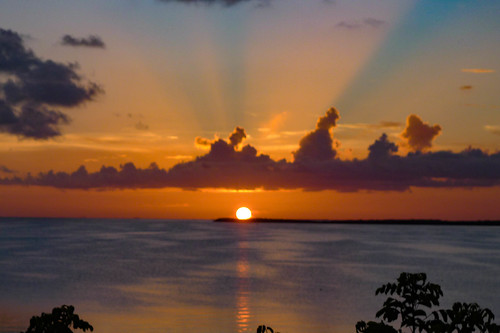