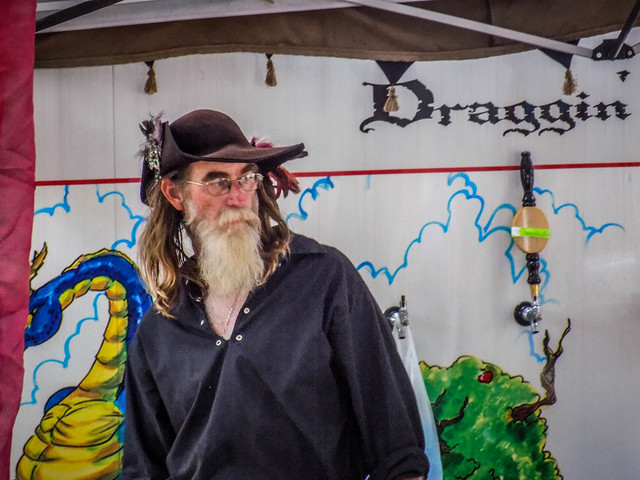 We were running errands up in Vero when I spotted the following sign along US 1: 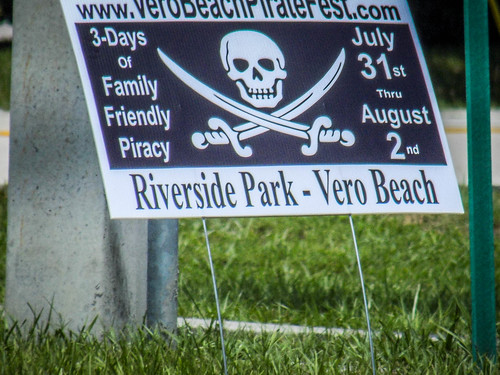 Hmmm….”3 Days of Family Friendly Piracy.” Sounds a bit…oxymoronic to me. Truth be told, I’ve always thought that the Disney ride “Pirates of the Caribbean” was a bit weird, long before the movie series even came out. I’m not a prude, but a ride celebrating raping and pillaging just didn’t seem quite right. Sure, the real violence has been sanitized into something suitable for kids, but given historical realities and real incidents of piracy off the African coast, I’m often left scratching my head over the popularity of pirates.

We had some free time away from household duties, so we decided to check out the Vero Beach Pirate Fest.

The event was held at Under the Oaks at Riverside Park in Vero Beach. We had attended another art festival here, and this one was set up similarly. There were white canopied booths set up with various displays. 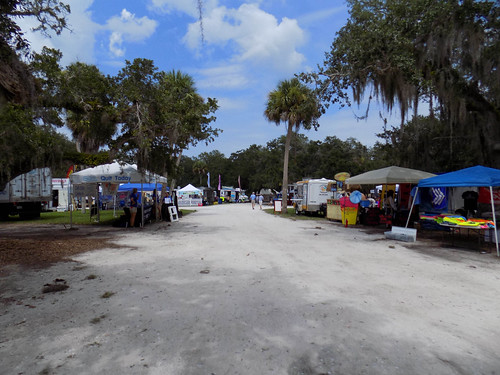 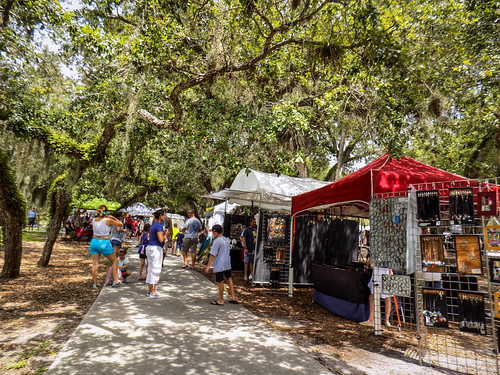 However, as one might expect, most of these had a pirate theme. 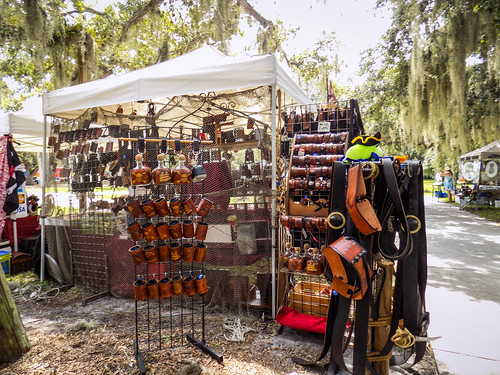 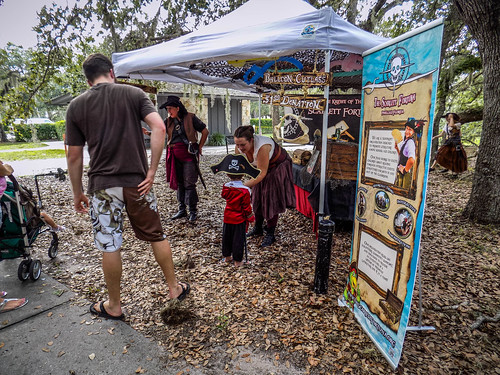 I’m not talking about little trinkets, either. There seems to be an entire class of vendor geared toward outfitting the modern pirate with serious swag. One could purchase elaborate costumes and any accessory to go along with said outfit. 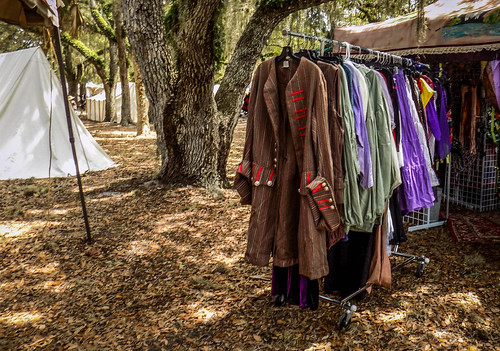 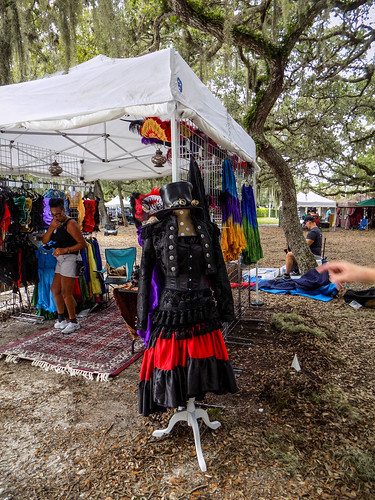 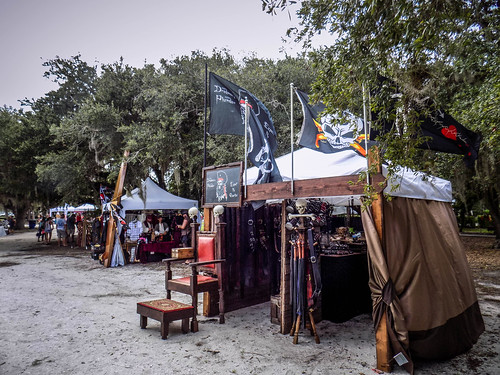 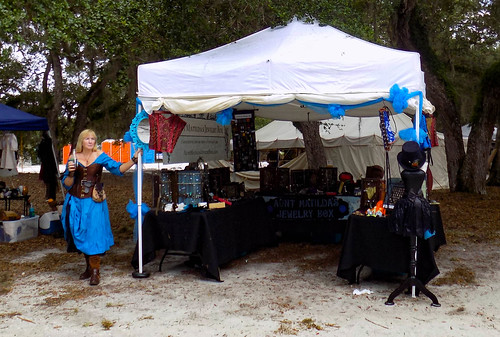 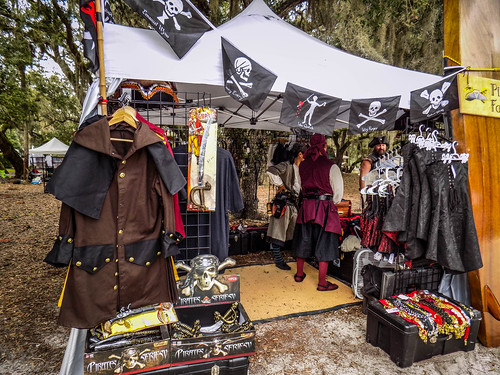 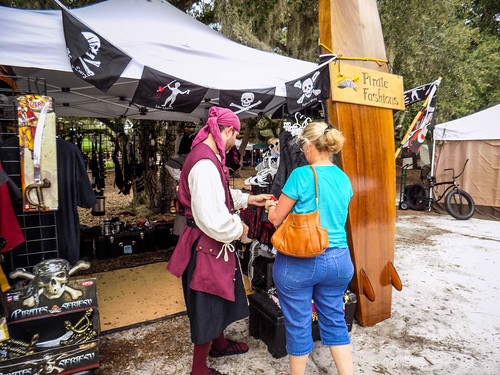 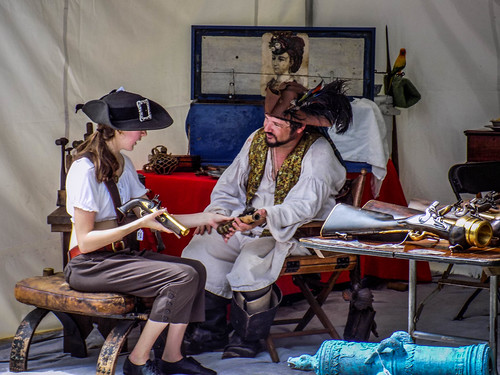 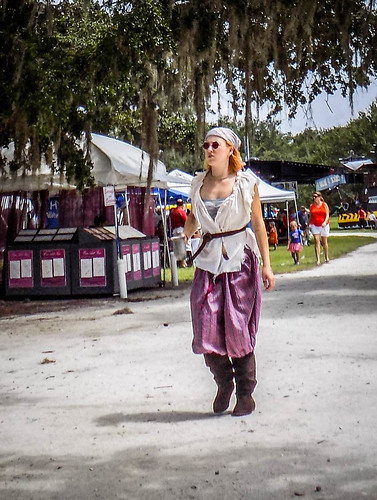 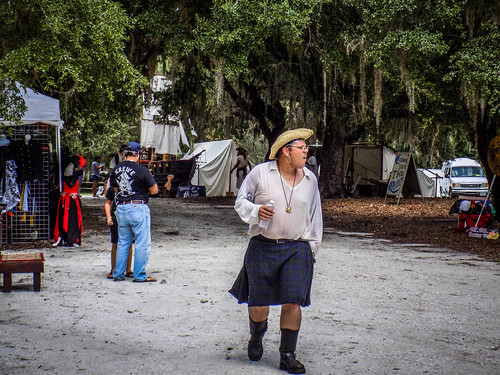 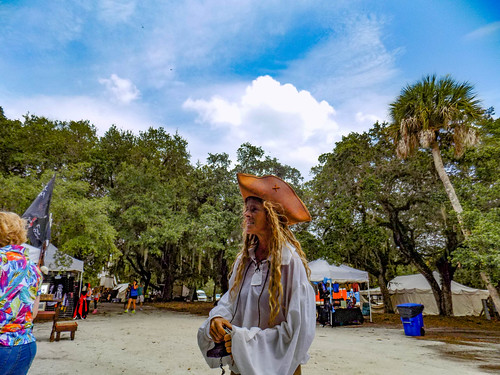 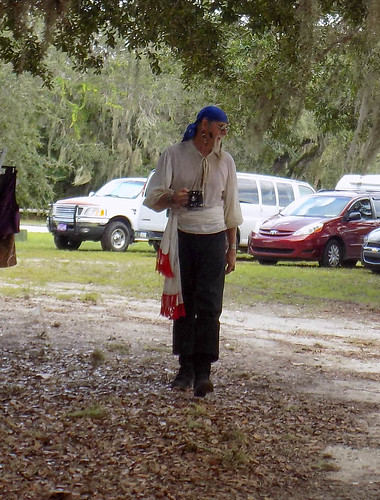 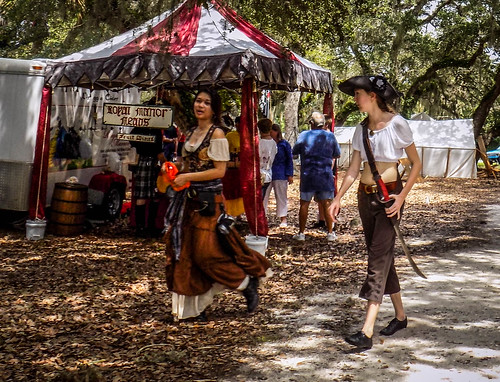 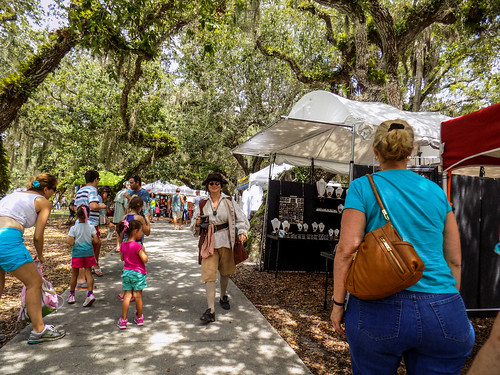 In one section there was apparently a pirate encampment, complete with pirate re-enactors. It was hard to tell if the costumed pirates I saw wandering through the festival were part of the re-enactment, vendors, or just random people playing dress-up. I suspect it’s a combination. 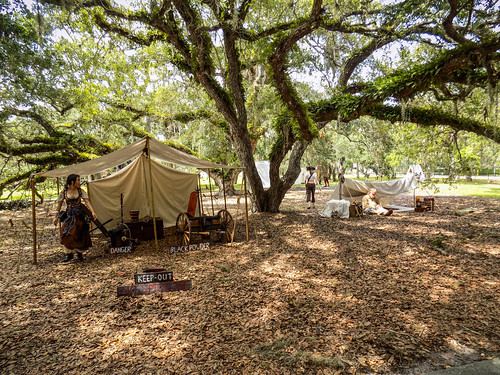 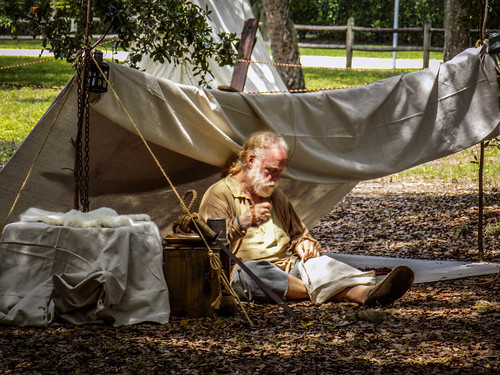 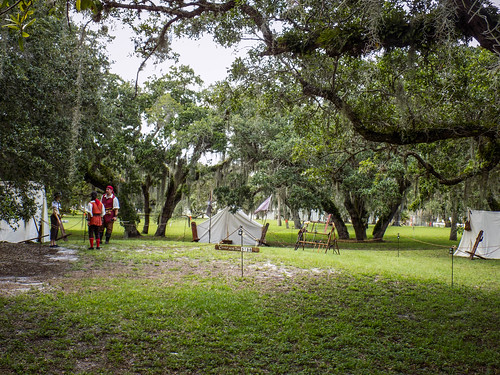 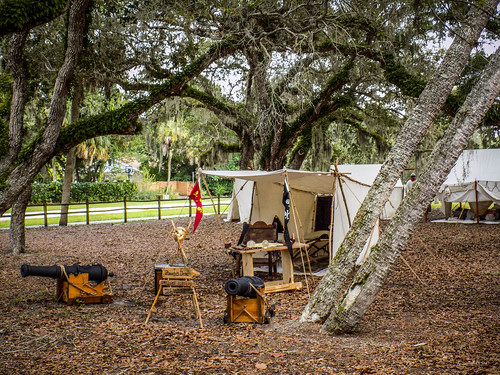 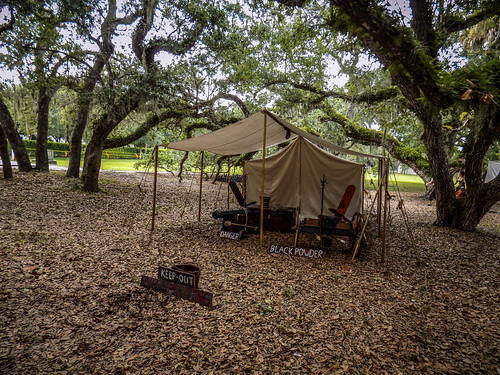 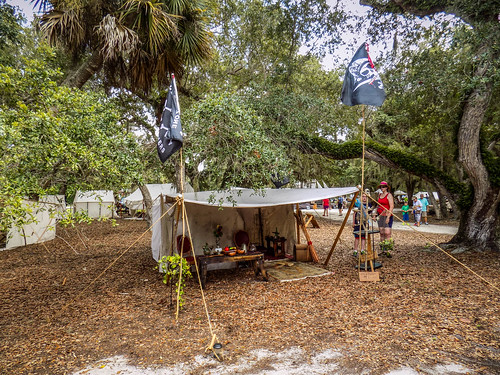 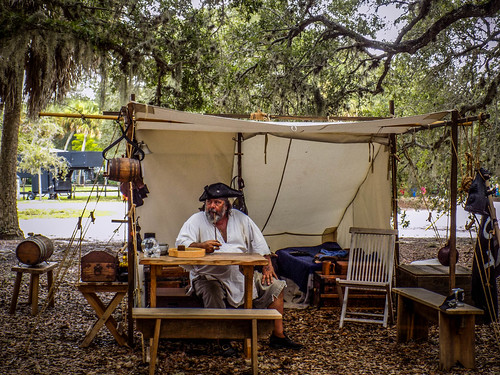 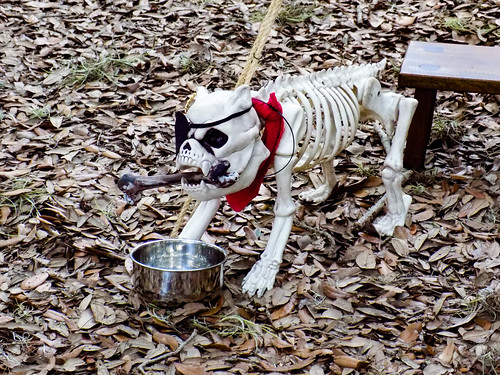 I was amazed at how this seemed to be such a thriving niche business. I guess it’s no different from people that dress up in kilts and garb like William Wallace from Braveheart at the various Scottish games, or from those that participate in any other type of re-enactment. The Gentlemen of Fortune website lists three categories of pirates and pirate groups:

I suspect that just about any Renaissance Faire would have the same categories. Of course, there are plenty of vendors to cater to the needs of these groups, and these would be the ones to show up to the festival we attended.

And, there are plenty of opportunities to wear their costumes. The big granddaddy is the Gasparilla Pirate Festival held in late January or early February in Tampa, Florida. The festival features a re-enactment of the invasion of the city by apocryphal pirate José Gaspar. The invasion is in two parts – a flotilla across Tampa Bay, including a pirate ship, and a parade through the town. Different pirate “krewes” participate in the event, the oldest of which and the one sailing the pirate ship is Ye Mystic Krewe of Gasparilla.

In addition to Gasparilla and the Vero Beach festival, I found dozens of other communities around Florida that that have their own pirate festivals. For some reason, many of these are combined with with mermaid festivals. Gender equality? An attempt to infuse something less diabolical than piracy? Who knows?

The pirate festivals aren’t limited to Florida. There are others along the Atlantic Coast where you would expect to see them, such as Tybee Island out from Savannah and along the Outer Banks of North Carolina. There are also festivals in California, and I found a couple in Washington State.

The weirdest ones, though, were the festivals held in completely landlocked states, such as the Midlands Piratefest in Omaha, Nebraska. The Missouri River stands in for the ocean, I guess. It looks like this festival is associated with various RenFaires in the area.

So, piracy is big business. I knew pirates were popular, but the extent of this popularity hadn’t really hit until I visited the Vero Beach Pirate and Mermaid Festival. I never got to see the mermaids, though. Our visit was cut short by the oppressive heat and an impending storm. Maybe, just maybe we can convince the city leaders of Greenville to hold their own pirate festival along the shores of the mighty Reedy River.

3 thoughts on “The Big Business of Piracy”