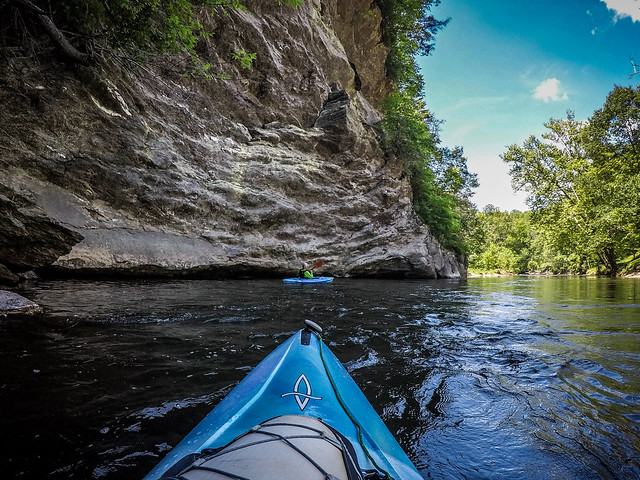 Friend and fellow kayaker Terry Alexander has been wanting me to come up and paddle his favorite river, the North Toe. A couple of weeks ago while Laura was out of town I finally got a chance to do just that. I spent a great couple of days in the Linville, NC area catching up, listening to good music, and kayaking down one of the most spectacular rivers in the area.

Terry was the individual that got me started with kayaking. Prior to that time I’d done rafting and canoeing, but no kayaking. Terry was our pastor at McCarter Presbyterian Church in the late 1990s while I was music director there. He was (and still is) an avid outdoorsman and he wanted to get started into kayaking. He bought a boat, I bought boats for me and Laura, and one of my choir members, Ed Cummings, bought a boat. Some Sundays you’d see our vehicles loaded up for a quick escape after the service. We always said we should add the Eskimo Roll as a third form of baptism.

Terry and Ed moved away, but I was able to keep in touch with Terry. It had been years since I’d seen him in person, and I was looking forward to the trip and reconnecting.

I drove up to the High Country of North Carolina early on a Thursday afternoon. It was a pleasant ride through territory I’d not visited in ages. I stopped at a couple of art galleries, then made my way over to Newland to meet Terry at his house. After getting settled, we headed over to the Old Hampton Store in Linville for dinner and some live music.

We ordered drinks at the bar, then placed a food order and found a spot outside where we could listen to the band.

The band was a trio called “Fallen Angels.” Terry suspected that it was because they were preacher’s kids. They did some older country songs as well as some gospel. They had close harmonies that reminded me of Uncle Walt’s Band.

I was taking notes. Their repertoire would make a great addition to our flea market songs, so I was writing down songs that I’d like to learn. They also did one of the most fantastic versions of “I’ll Fly Away” that I’ve ever heard.

Lots of folks came up and spoke with Terry while we enjoyed the evening. During one of the breaks we even chatted with the band. Seemed like a nice bunch of guys. Some folks started dancing when they started back.

It was a great evening, and a good start to our adventure.

The next morning we got a leisurely start and headed toward the put-in. The section of the North Toe that we would be paddling is north of Spruce Pine off of US 19E. This stretch has a low shuttle-to-paddle ratio, as Alan Russell would put it. The river curves around in such a way that you don’t have to drive far to get from the put-in to the take-out. We left Terry’s truck at the take out, at pull off on the side of the road. The put in was at a park behind a baseball field.

I was curious to see how this hybrid boat would handle on light whitewater. Terry had told me that it wasn’t anything I couldn’t handle. However, because I was either rusty or unfamiliar with this boat, I ran into trouble on the first small rapid. I got hung up on a rock, had to get out and free the boat, then take a different route. I didn’t spill, though, and soon found myself back on track.

I was shaky on the next two rapids, but then settled down. I got the hang of the boat and got my confidence back up. The rapids were fun, but not even as challenging as the Lower Green.

Initially the route was bordered by rural farmland, but as it wound through the mountain valleys things got more isolated. The scenery was absolutely spectacular, with the river bordered by high rocky bluffs and boulders. It was one of the most beautiful rivers I’ve ever paddled, and the weather was superb.

As for the boat, I’m getting used to it on whitewater. It doesn’t handle quite as well as my Perception Torrent, but I think it will be more versatile. Each time I bounced off of a rock I worried about scratches, but that’s the nature of these boats – they are designed to take it. The water level was good, but could have been a few inches higher so that I didn’t hit quite so many of them. I even managed to surf a couple of nice waves.

We stopped for a couple of breaks and I really wanted to swim in some of the deep, clear pools. Terry declined, saying that it was too cold. I don’t think he’s ever plunged into Jocassee in early spring to find out exactly what cold is. We kept going past mile after mile of amazing views. There was one last big rapid with a nice set of standing waves, a bouncy fun end to the trip. Soon we could see Terry’s truck on the banks and knew we were at the end of our trek.

We paddled 8.3 miles in about three and a half hours. Not too bad.

I had the GoPro running, as usual. This time I also shot some video in addition to the time-lapse so that you can get a feel for the rapids. The sounds of the paddling almost have an ASMR effect for me.

There were just too many photo ops for one post. Here’s a link to the gallery on Flickr. Click on the image to go to that collection.

It was a great trip. I got to paddle a new river, but, more importantly, I got to reconnect with Terry. I’m sure we will be doing this again.

One thought on “Dipping a Toe in the North Toe”