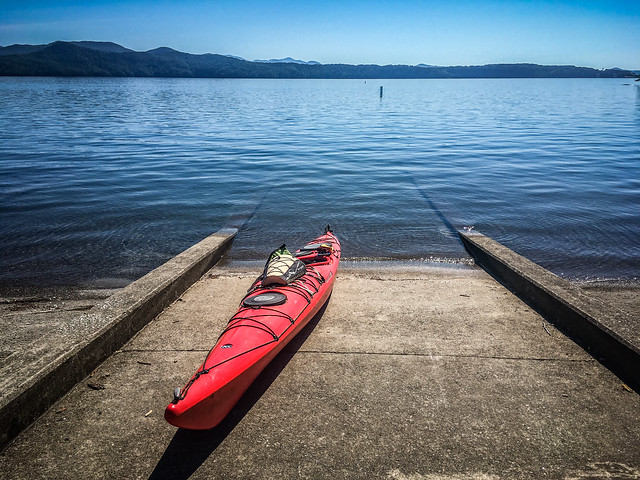 When I bought Big Red last December I did so with one specific venue in mind – Lake Jocassee. Jocassee is remote and some of the coolest locations are a distant paddle. I was thinking that a nearly 18′ boat with a rudder might make those spots more accessible. It’s been almost half a year since I bought the thing, but I decided that it was time to take the big Tsunami 175 out for its first run on the lake.

The size of this boat has been an issue. It will only fit on top of my Subaru. It sticks too far out the back of a truck, so some places I might have taken it on Lowcountry Paddles just wouldn’t work because of logistics. I had it out for a short trip on Clark Hill Reservoir back in February, but I think the last time I really paddled it was on the Indian River right after I got it at Christmas. It was high time that it got back on the water.

I headed out on a spectacular Tuesday morning, not quite as early as I would like, but still early enough to beat any crowds. I found decent parking and got my gear set up and ready to go at the end of the ramp at Devil’s Fork. As I got ready to launch another solo paddler was getting ready and commented on the boat. He and I would cross paths several times throughout the trip.y

I decided to paddle light, at least for me. Since this was a shake-down paddle I didn’t even bring my GoPro (I still haven’t fixed a permanent mount on this boat for it) but only my Fuji camera. I wasn’t even sure where I was going. My plan was to set off across the lake and see where inspiration took me.

I found myself heading toward Wright Creek Falls. The boat cross the open body of the lake with ease. I sprinted far ahead of my new paddling acquaintance, who was in a 10 foot boat. When I reach the Double Springs point I continued along the water’s edge admiring the exposed geology. Water levels were quite high, but not quite as high as they had been. Pollen lines marked the high water mark – “God’s chalk line”, as Alan Russell called it.

The boat handled beautifully. I wouldn’t say that it was quick, but once you got it up to speed it tended to cruise very nicely. It’s certainly not as maneuverable as my Dagger hybrid, but with the rudder it’s actually about as agile as my Big Blue Tsunami.

I made it up to Wright Creek Falls and had the place to myself. Varying water levels make each visit a different experience. At lower levels there’s a nice exposed beach and you can hang out and walk under the falls. At the right level you can easily paddle behind the waterfall. Today the water was quite high and any attempt to paddle behind meant I’d get soaked, which might not be a bad thing.

Without exposed beaches there’s not a good place just to hang about. I could have gotten out of the boat and climbed up to the upper tiers of the falls. However, I decided to pull back and get some wider shots, despite the less-than-ideal lighting.

As I was leaving the other paddler finally caught up to me. He said that he had also been checking out some of the other nearby falls in the coves I’d just passed. This was news to me. As many times as I’d been up here I hadn’t really noticed additional falls. I decided to see what he was talking about.

The first of these was in a deep cove just south of Wright Creek. I could have sworn that I’d visited this spot several times but never seen any falls. I had heard some water running, but had just dismissed it as a tributary stream trickling into the lake. I had to get out of the boat to see them, but it turns out that there were some pretty decent falls there. They weren’t spectacular, but still interesting. The vegetation and bad lighting made getting a decent photo almost impossible.

At the entrance to this cove are two small islands. At lower water levels these islands are connected to the shore. At current levels the isthmus connecting the islands makes for a nice shallow wading area and a great spot for lunch. That was my next target. I thought I could hang out, and possibly even go for a swim in the deep protected cove behind the isthmus.

As I was enjoying a light lunch my paddling friend dropped by. He introduced himself as Scott, a ranger at Oconee Station. We chatted awhile and enjoyed the water. It was so clear that Scott’s boat seemed to be floating in air.

I finished my lunch and Scott offered to show me the second waterfall. I followed him into the next cove. Scott continued on his way and I paddled on in to find this waterfall.

The falls were much more impressive than the last set I found, though not as big as Wright Creek Falls. Like Wright Creek these were multi-tiered. With the direct lighting I was only able to get a shot of the lower tier. As with the previous falls, to get the best view I had to get out of the boat.

I honestly don’t know how I’d missed these falls all these years. I’ll have to make them a regular stop on my way to Wright Creek. I’m sure that the recent rains have made them much better that the probably are during the dry summer months. I couldn’t find a name for the falls, but I’m calling them “Double Springs Falls” since it’s on Double Springs point.

I decided to paddle over to the first set of falls I’d ever visited at Jocassee. These are on the western shore just a couple of miles from the boat ramp. To get there I had to paddle past the coves along Fisher Knob. Every time I come this way I look at these coves and think it would be the perfect place to just pull up with a cooler, a hammock, a good book, and just hang out for a few hours. One of these days I’m going to do that – no destination waterfalls, just find a spot and enjoy the water.

I continued on to my last set of falls. Once again I had them to myself, and once again the lighting was terrible for photography with a point-and-shoot. Direct daylight just completely blows out the image in some place, and makes it too dark for the spots under the trees.

From here I made my way back to the Devil’s Fork boat ramp. Big Red had performed well. I’m still not sure I like having a backband instead of a seat. I may have to get one of those self-inflating stadium seats. We’ll see.

Along the way back I passed several other groups of kayaks. At the boat ramp there were two teachers who were just heading out for a relaxing paddle after a long end-of-year school day. I sympathized.

Even though this was a shake-down paddle, I covered 10.2 miles. I think I will make my next trip just a short one out to a hidden cove and just hang out.