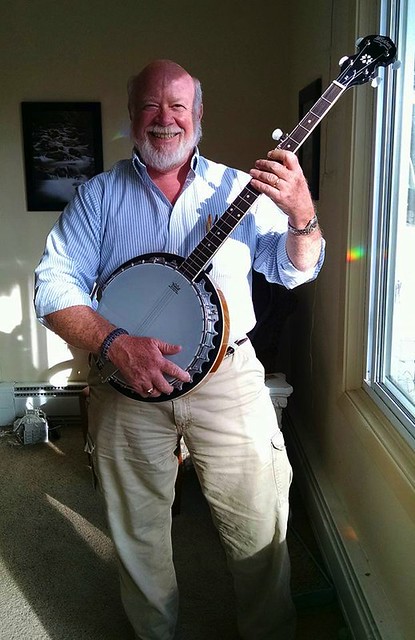 I’ve made one more pass around old Sol. Laura says that this is an auspicious birthday because my age is divisible by both five and eleven, two of her favorite numbers. Last year was complicated by family matters, so I spent the day by myself climbing a mountain. This year was complicated by singing engagements, so we celebrated a couple of days early. On Saturday she surprised me with a new Washburn banjo.

The banjo is beautiful. It has a light maple back, and she also got a custom case for it. 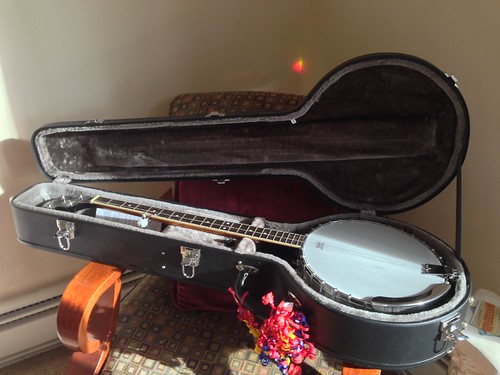 I had never played one before. Or, I should say, I had never played one with the serious intent of making music. The tuning was so different from a guitar, and I didn’t really understand the purpose of that fifth string. That was back in high school. Now, with much more knowledge of music theory and experience performing, I figured I could give it a go.

There are two major styles of banjo playing – 3 finger Bluegrass picking and Clawhammer, or Frailing. Everything I’d read and heard said that you should pick one style and stick with it. Initially I thought I’d do Bluegrass. I took classical guitar lessons once upon a time, and I figured that would translate well into picking a banjo. It doesn’t. I was doing OK with the rolls as long as they didn’t involve the fifth string. The idea of moving my thumb upward to get a higher note seemed counter-intuitive to me.

So, for now I’m finding that frailing works for me. It took a bit of practice to get where I could hit the right string to bring out the melody in a song, but it’s coming along. With the thumb essentially acting as a drone, it becomes a natural pattern. I already knew how to do left-hand hammers, so those sorts of grace notes and adornments came easily to me. By my third day of playing I had built up a nice repertoire of gospel and folks songs, as long as they were in the key of G major. 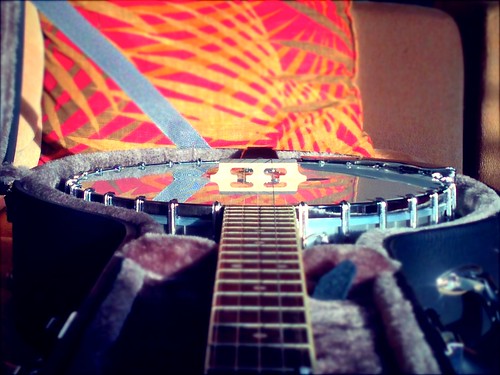 The biggest problem I’m having is with tuning. Ken Cothran reminded me of the old joke…

What’s the difference between a car and a banjo? You can tune a car.

First, there’s the bridge. It isn’t fixed, as it is on a guitar. It rests on top of the banjo head, which is the same as a drum head, so it has to be put into position. If you don’t get it right, you have tuning problems, and can possibly damage the head. For a first timer this was a bit scary. I don’t think I got it in the right place. Then there’s the problem wth multiple tunings and scales. I’ve got lots of learning to do there.

The problem with bridge placement led to my first broken string. I thought I was loosening the string to reposition the bridge, but was, in fact tightening it to the point that it broke…rather startlingly. As I type this Im sitting in my favorite bagel place, Greenfields, waiting for Guitar Center to open. I’ll get a couple of spare sets of strings and see if they can show me how to position the bridge correctly.

And, when I do get back to play, Rory has found his favorite place to hang out while I’m practicing. 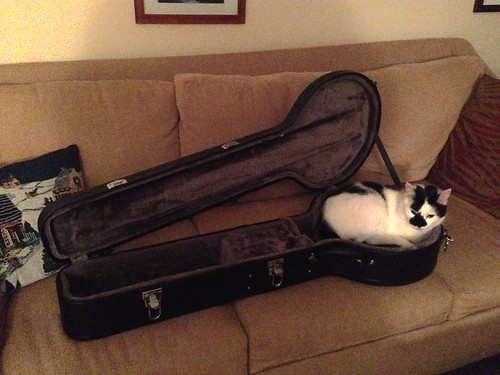