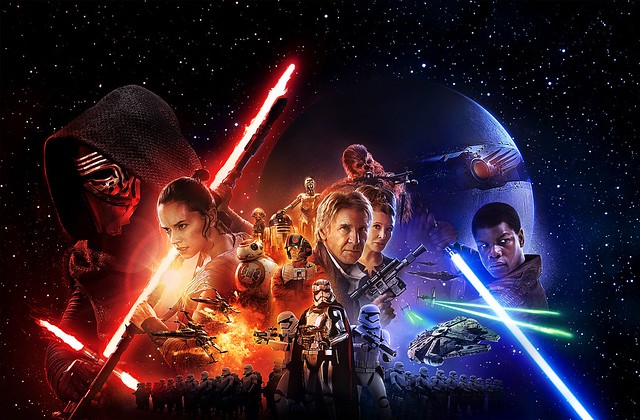 However, hype can be good. Hype can be fun. It’s gotten to be a tradition with Chip and me to go to opening night for the various Marvel movies. It’s fun. It’s a party. So, we approached this opening night with the same attitude.

Chip had gotten us tickets for an advanced showing on December 17. Borderlands Comics had bought out the theater and were reselling the tickets. Apparently there were several other groups doing this, as there were multiple showings at the theater we were attending.

When we arrived there was a line. However, it wasn’t for the movie. It was to have photos taken with Stormtroopers. 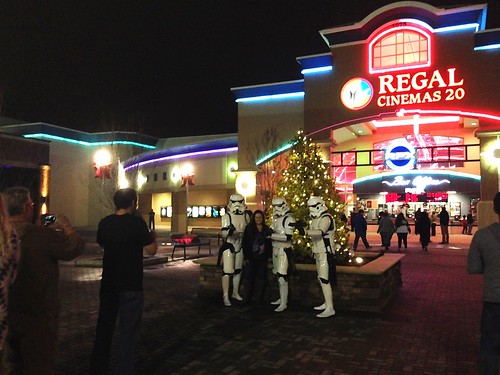 Inside it wasn’t as bad. There was a line forming for a 3D showing, but it wasn’t too bad inside. 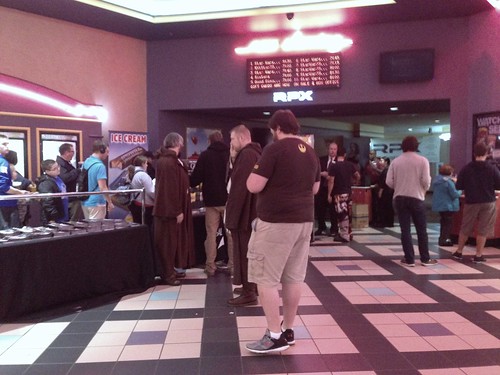 While there were Stormtroopers outside, there were Jedi inside. There wasn’t a line, so Laura and I had our photo made with them. 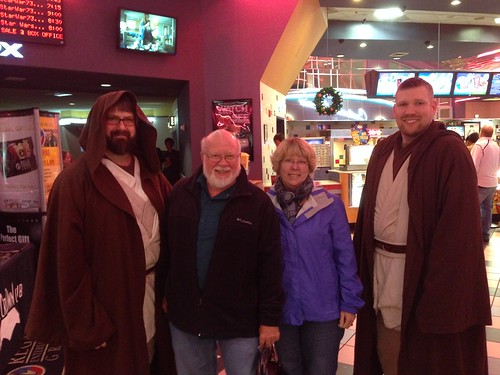 Before the movie started the owner of Borderlands came out with a check. All profits from the showing were going to Helping Hands of Greenville. Made me even happier to participate in this showing.

The lights dimmed, and the familiar phrase started up…

A long time ago in a galaxy far, far away.

…except, it was a great movie. It did not disappoint. It successfully captured the spirit and feel of the first movies, and those dreadful prequels were long forgotten. The new actors were fantastic, and the dialogue was even better than the original movies.

Not to say that the movie wasn’t without its flaws. No less that Niel Degrass-Tyson weighed in on the bad science on the movie via Twitter, and garnered a scathing rebuke as a result. The Huffington Post has two articles, one entitled 40 Unforgivable Plot Holes (spoilers) and another entitled 20 More Plot Holes (with more spoilers.)

Mostly I loved the movie and plan to see it at least a couple more times on the big screen. However, I had my own qualms with the movie. I don’t intend to divulge the secrets of the film, but my analysis may provide more than you want to here. So, here’s an unrelated picture of my cat Rory and an unrelated picture of a wind-up dinosaur while you close the browser, hit the back key, or do whatever you need. 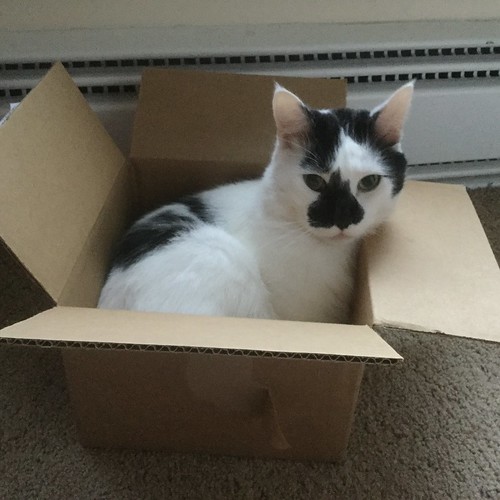 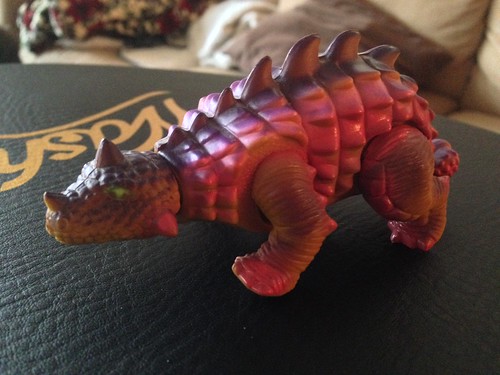 OK, are we good? Consider yourself warned, and let’s continue…

I had lots of qualms with J. J. Abrams taking the helm. He had already crapped all over the Star Trek franchise, and I was afraid going to do the same with Star Wars. Those movies weren’t bad, per se, but they had lost the soul of the franchise (or perhaps sold said soul for better ratings.) Fortunately, those fears regarding Star Wars TFA were not realized. However, that doesn’t mean he got everything right. Some of my nitpicking problems from Star Trek found their way into Star Wars.

Example One – Seeing stuff a long way off as if it were close up.

In Star Trek, Spock Prime is marooned on Delta Vega by Nero so that he can watch the destruction of the planet Vulcan. We are shown Spock’s point of view through a mind-meld flashback. The image clearly shows Vulcan exploding. The problem is, for that view to be achieved, Delta Vega would have to be as close to Vulcan as the Earth is to the moon. There was no way Spock would have survived.

In Star Wars TFA, Han and Lea witness the destruction of several planets from Maz Kanata’s homeworld. Again, these planets would have to be so close to each other for that view to be possible that any other nearby planet would have been drastically affected.

In Star Trek, James Kirk is marooned on Delta Vega in the one spot where Spock Prime can find him. On a planet-sized setting, this would be EXTREMELY lucky.

In Star Wars TFA, Finn crash-lands after escaping from orbit right back at the exactly where he needs to be to find Rey and BB8. Han and Chewie are in the exactly the right spot (in all of the galaxy) to come across their old ship, the Millennium Falcon. On a planet-sized star base, the heroes can find the exact port that does the most damage when hit, which conveniently is where all the baddies hang out.

Sci-Fi writers really do have no sense of scale. However, Chip put it best. Abrams sacrificed accuracy for story-telling convenience. It happens all the time. The trick is to go ahead, recognize the problems, but enjoy the movie anyway. After all, it was targeted toward 9-10 year old audiences. They are not going to quibble over these things. They are just going to have fun. I think that’s the best attitude – check your brain, leave Neil Degrass-Tyson at home, and enjoy these supremely entertaining movie.