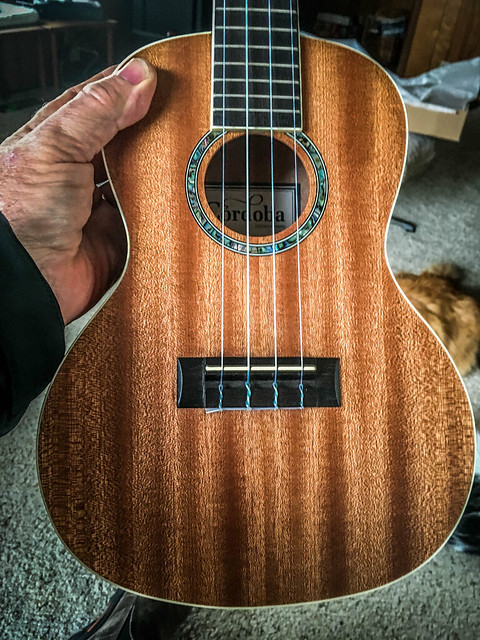 I thought this sabbatical year would be all about kayaking. It turns out that it’s more about music, with multiple events each week. This week was no different, with an Irish music session on Wednesday and some surprises through the week. Here’s a rundown…

I participate in Bring Your Own Guitar on every other Wednesday night at Empire Ale in Mount Vernon. Sadly, that seems to be a popular date and conflicts with both the Irish session at Village Pizza in Anacortes and the Ceili Jam at Roeder Home in Bellingham. If I start going to those then I miss my friends at BYOG. Fortunately Bring Your Own Instrument also has Bring Your Own Ukulele on the alternating Wednesdays. The problem is that I didn’t have my own ukulele…until now.

While still in the afterglow of the Irish session Wednesday night I talked about this dilemma with Laura on Thursday morning. She was surprised at how relatively inexpensive the instruments were and surprised me by say, “Let’s go buy one!” How could I refuse?

After checking out several models online we first rode over to Hugo Helmer Music in Mount Vernon. They had several very nice models that sounded great. I decided that I’d like a Concert size uke, one step up from a soprano. After pricing and playing a few there we rode up to Guitar Center in Bellingham where I found a very nice Cordoba 15cm Concert Ukulele. This one is a laminate mahogany rather than solid wood, but it would do nicely for a beginner like me. It was also a good price, and Guitar Center could provide support whether I was here or back in South Carolina. That was one thing Hugo Helmer couldn’t offer. With Laura’s encouragement, I bought it. 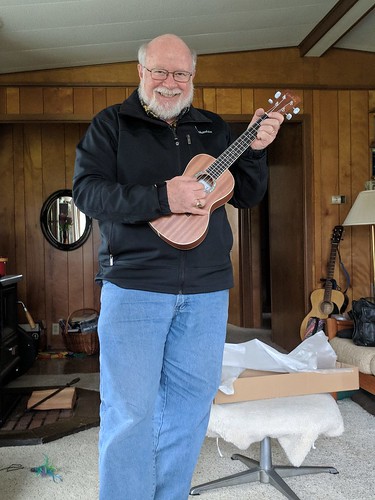 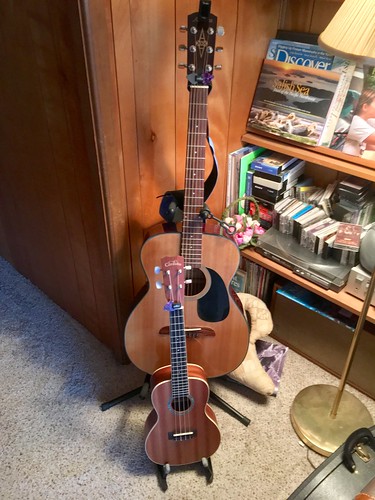 I hadn’t played a ukulele since I was child. Ukes seem to be enjoying a renaissance right now, but for whatever reason I hadn’t gotten in on the craze. I took to it quickly and found that it was quite easy to play. The ukulele is such a happy instrument. It’s hard to be depressed while playing one, even when playing in a minor key.

I got a small stand for it and a case is on order. I’m sure I’ll enjoy taking it to BYOU this coming Wednesday evening.

I’ve got several tin whistles. Most of these are Clark whistles in the key of C, including one that I bought in Ireland. I can squeak out a tune, but haven’t really been able to play them well. So, when the Littlefield Celtic Center offered a tin whistle class I jumped at the chance.

When we were back home for Christmas I snagged a couple of my whistles, just in case. I picked up one C whistle and one D whistle. It turns out that the D whistles are the ones used in most Irish music, so it was lucky that I had one. Even so, I packed up both of them and headed to my first session this past Thursday evening.

Our instructor, Becky Deryckx, was there and we were all waiting for another meeting to clear so we could set up for class. Becky had an unusual way of transporting her whistles, stuck into the top of her boots. 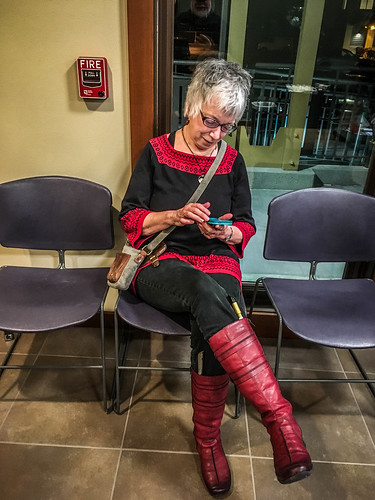 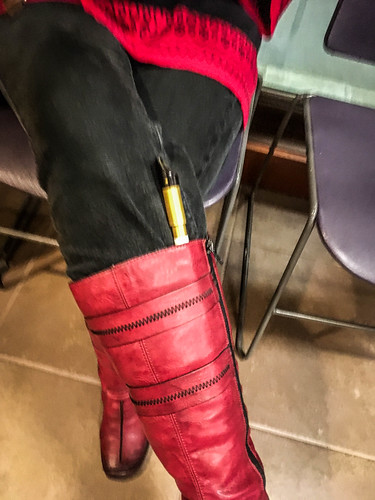 There would be fifteen of us in the class. Some of us could read music and for some this was their first experience with an instrument of any type. Some were regulars at the sessions I attend. 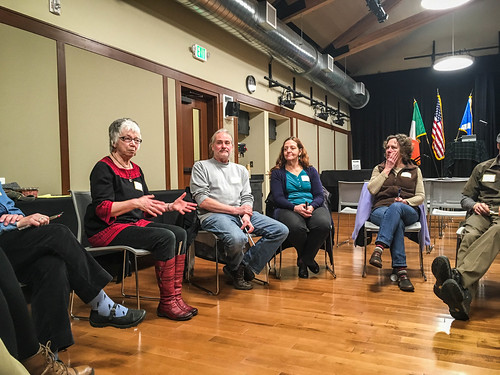 Becky would be teaching us to play by ear. We would learn several tunes by rote. This is in keeping with Irish tradition and I figured it would help my as I struggle through those sessions. Over the next two hours Becky presented information then gave us time to practice. 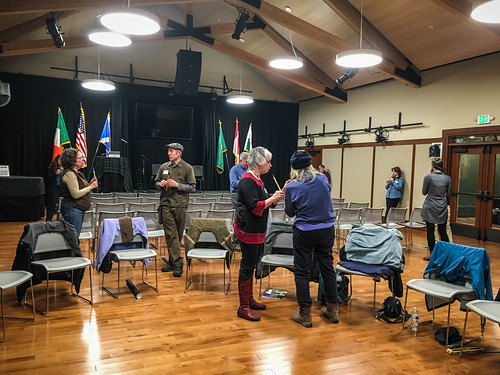 There were some experience whistle players in the class. Skye is the director of the center and plays small pipes as well as whistles in our Scottish sessions. There was another whistle player, and a couple more had played. I had an advantage in that I’d played in a recorder ensemble and taught recorders to my elementary students. I used to carve Native American flutes. I had a background in wind instruments. While I understand the tin whistle and know the notes on it, I just haven’t been able to master the technique. Throughout the evening I kept getting a squeak as I moved from the lower to upper octaves.

The class moved slowly for those that didn’t have as much experience, and I was OK with that. I caught on quickly, but was OK with us going at a slow pace for the absolute beginners. It gave me time to practice.

There are three more classes in this series. We’ll have to see if I can jump in with the whistle at some of the upcoming Irish or Scottish sessions after this is over. I may have to upgrade my whistle situation, though. My D whistle is a very inexpensive model that can’t be tuned. We’ll see if Laura is as keen for me to buy a new whistle as she was for me to get a new ukulele.

I use lots of online resources to learn new tunes. The Session is my go-to resource, but they are primarily a repository of Irish tunes. There are several others, but one thing I’ve noticed is that most use a strange notation known as ABC Notation.

ABC Notation is a way of notating traditional tunes. To me, it’s more like coding than notation. Letters are used for each note, as well as ways to indicate time signatures and note duration. Notation for a typical reel like “Jenny Dang the Weaver” would look like this:

Some traditional players can read that as easily as I read standard notation. Fortunately, there are several apps that can help. EasyABC is available for Mac and Windows computers. It will import ABC files and export them as MusicXML or MIDI files. Tunebook and The Craic are two good apps for iPad that also import and play back ABC files. This is a great way to learn and play along with new tunes. Websites like The Session and the ABC Notation site have thousands of available tunes.

I’ve even found a plugin for this website that will read ABC notation and render it as standard notation. “Jenny Dang the Weaver” above looks like this in standard notation, as rendered by this plugin:

I’ve been gathering tunes and creating collections and sets for upcoming sessions. Looks like this might be a useful resource for learning new tunes.

I’ve created a couple of charts in Google Sheets to keep track of all this music stuff. Fellow BYOIer Jeremiah asked if I could list all of the sessions I’ve been attending and recommend whether or not they might be good for beginners. I thought it was a good idea, so this past weekend I created a chart.

This chart lists the session, location, schedule, skill level, whether or not they allow music, plus any comments. I’ve embedded it below:

The other chart I created is for my increasing collection of musical instruments. I made a list of instruments, whether or not I can play it just a little, if I’ve taken lessons, if I actually own one, and if I’ve played one in public. Here’s that list…

Next week brings even more music, including a Scottish session, my first Bring Your Own Ukulele, and the inaugural Turtle Jam in Bellingham, a slightly faster of the Slug Jam. We’ll see how these new developments influence those events. 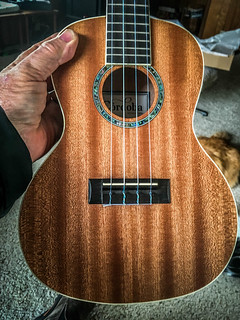