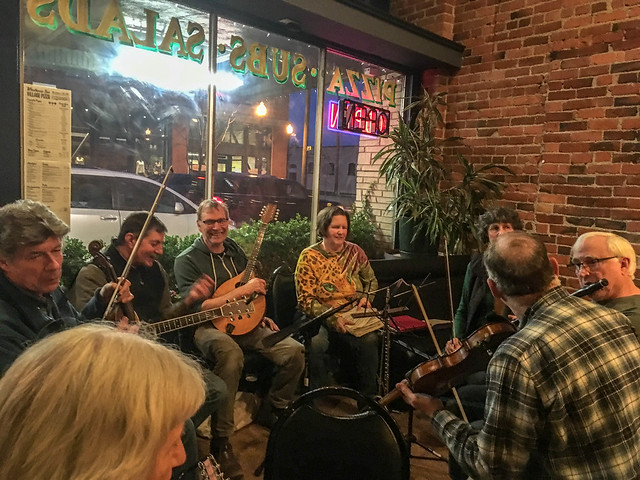 I had a very different post planned. I’ve actually got a draft entitled “I Hate Irish Music.” I was going to vent some of my frustrations with the music sessions I’ve attended up here, specifically the Irish sessions. However, I decided to give the genre one more shot, so I decided to try a different session at Village Pizza in Anacortes. My mood did a 180. This felt like the closest thing to the pubs I enjoyed so much while in Ireland.

Here’s how my opening paragraph started on that first draft…

I love Irish music. My favorite experience while in Ireland was hanging out in the pubs and listening to live music. The tunes are infectious and get into your soul. Especially with live music, there is an energy to the reels, jigs, hornpipes, etc., that’s hard to describe. However, I’ve found a problem. Irish musicians [or, more specifically, at least the ones up here] seem to have found a way to suck all of the fun out of it.

All (well, most) of the folks have been very friendly and accepting. However, the Irish musicians have some very specific rules about their sessions. No printed music is allowed – you have to have everything memorized. You don’t try to figure things out by ear in a session – you either know the tune or you don’t, and you don’t join in unless you do know it. You don’t join in a session until you’ve put in your time with a slower, learning group. You don’t improvise – everyone plays the same melody without harmonization, and disputes can break out as to which variation is being played (and there are LOTS of variations to tunes.) I was even taken to task for calling these “jam” sessions. You have to follow the session’s etiquette (whatever that might be.)

Lest any of my Irish music friends take me to task for being too harsh, I’ve heard these statements made in several Irish sessions and have seen words to this effect printed on websites describing the sessions. At one of the sessions I attended an audience member asked about the music and the answers were pretty much what I’ve written above.

With tunes numbering in the hundreds of thousands, plus all the variations and new tunes being written every day, the task of learning the repertoire is daunting. It doesn’t help that after awhile all of these start to sound the same. I can see why someone wanting to join in the fun might opt for an accompaniment instrument like a guitar or a rhythm instrument like the Bodhran. You don’t have to memorize the tunes.

My problem is that I don’t play an acceptable melodic instrument for Irish music. I don’t play fiddle, flute, or Uilleann pipes. I play keyboard and sight-read very well, so I could learn tunes that way. If you play an accompaniment instrument or the Bodhran, then you’re kind of stuck.

I guess my main gripe is that IT’S NOT A CONCERT, DAMMIT! It’s an informal group of somewhat random people getting together to play. I can understand having some guidelines, but unless you’re forming a band then there’s no need to be so uptight about how people join in.

So, I was about to give up Irish music entirely and just stick with the Scottish sessions. I knew there were other Irish session around. I’d found out about the one at Village Pizza in Anacortes quite awhile back from The Session website. While at the Bellingham Folk Festival several mentioned that they played at Village Pizza, and I had another fellow player bring it to my attention just recently. On The Session it lists this as a “slow session.” It might be doable.

The problem is that this session meets the exact same time as my Bring Your Own Guitar group, every other Wednesday from 6:00-8:00. I’ve made some good friends at BYOG and don’t want to abandon them. Last Wednesday it seemed that half the group was either sick or would be out of town, so when BYOG cancelled it seemed the perfect opportunity to check out Village Pizza. Sherry, one of my other BYOG friends, joined me for the adventure.

As usual I got to the venue early to scope out the situation. Village Pizza is located on the main drag of Anacortes, on Commercial Street. 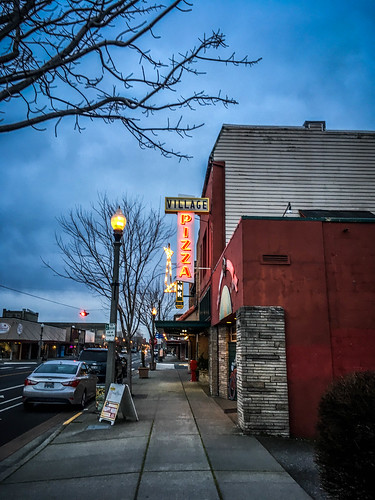 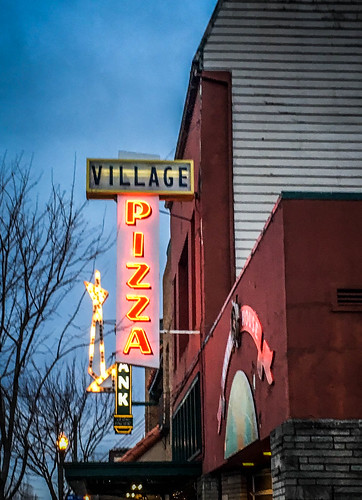 Just inside the front door were a set of stairs. I knew they had a meeting space upstairs, so I headed that way. It was dark and definitely not set up for a session, so I headed back down, confused. I had planned to arrive in time to get a bite to eat before the session started. I ordered a pizza and asked about the setup. The group would be playing downstairs near the front windows. I grabbed a table and waited for my pizza.

Sherry and her sister-in-law Marlene soon arrived and joined me. They also ordered food, but it took a long time for it to arrive. Musicians started to arrive first and began claiming space in the appointed area. I still had no food, but moved to the end of one table at the outer edge of the circle. 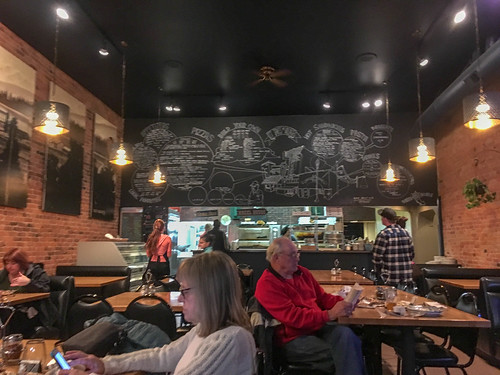 There were several other people I’d met at various functions joining us. Dennis from Bellingham called me by name and said that he was glad I had made it. A Bodhran player named Laura who joins us regularly in Mount Vernon was there and also greeted me. Brad, who also plays guitar, had been at our last Scottish session. I recognized several others. I felt more at ease joining this group than any other Irish group.

There was another bonus. This group allowed music stands and music. There is no set list as with the “Tartan Top Twenty” but you could refer to any resource or tune book you might have. My stand was in the car and space was at a premium, but I had my iPad. I could (and did) look up tunes when I had the chance.

The music got underway and I still had no food. I should have allowed more time if I was going to eat first. I should have known better – pizza places (good ones, anyway) take awhile to make pies to order. I wasn’t upset about how long it was taking, but when the pizza arrived it was a bit awkward. I would pause to take a bite between tunes, trying to make sure I didn’t get grease on my nice guitar. Sherry had the same problem with her order. The pizza was excellent, but it wasn’t the best of circumstances. 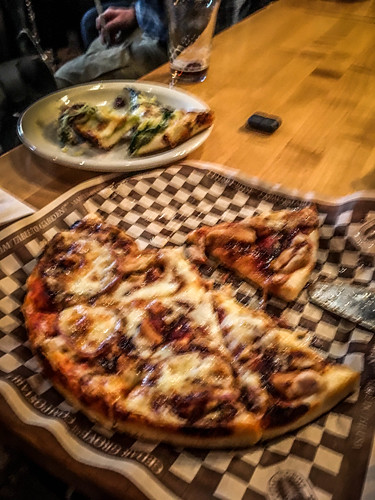 The other awkward bit was that I was seated right in the main thoroughfare. I had to twist and move out of the way so that folks could get in and out of the restaurant. It was a problem. 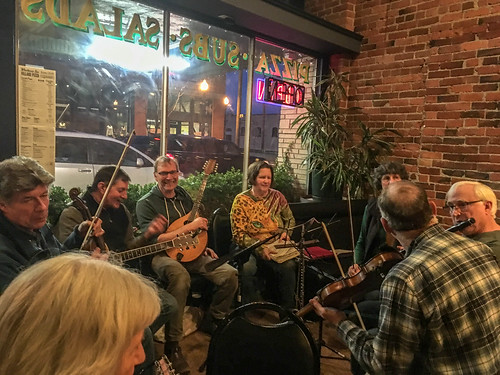 As for playing the music, it was a blast, but challenging. This was Sherry’s first Irish gig, and she was struggling. At least I knew a bit about the chord progressions and could fake it. Sherry was seated so that she couldn’t see the chords I was making, so she had to wing it occasionally. Brad sat across from her with his guitar, but he was improvising all over the place and difficult to follow. In an e-mail to my BYOG friends I paraphrased Douglas Adams, “…they use some strange definition of ‘slow’ of which I was previously unaware.”

We played until 7:30 when the folks from Village Pizza brought out two large pies for the performers. If I’d known about that I wouldn’t have ordered ahead of time. I had a chance to chat with Bill C., the founder of the session. He had moved to the area from Southern California in 1996 and had started this group some years back. Bill played percussion, and was playing the spoons with vigor this evening. He was an interesting character, and we got along great.

During the break Sherry and Marlene decided to head out, so we were able to close up ranks and continue afterwards. Folks walking down the street would pause in front of the windows to watch and listen. Some even came in for pizza, which is why the place didn’t mind making an investment in pies for us. We got applause after each set of tunes, and it felt great.

Here are a couple of sound clips from the evening. You will hear the typical clatter and noise from the restaurant interspersed with the music. I had my recorder on the table behind me, so it picked up my guitar clearly You’ll also hear Bill playing spoons and occasionally banging out a rhythm on the table.

The first is Swallow-Tail Fly, which I actually know fairly well, followed by another tune I don’t know as well. You’ll hear me pause as I figure out what’s going on. At the end we start to sing and play Happy Birthday for a group coming downstairs from a birthday party held up there.

I don’t know the names of the tunes in this next set. Bill really started knocking on the table at the end of this one.

It was a great evening and it restored my faith in Irish music, so much so that I made some plans and arrangements, but that’s for another post. The folks were warm and welcoming, and I bet we sounded just as good as those other groups that are such sticklers for their rules. At least it was more fun.

I will mention this again in a later post, but I started tin whistle lessons this week so that I could learn more Irish tunes and participate in the melodies. Wouldn’t you know it? One of the first things the instructor talked about was…session etiquette. Oh well. 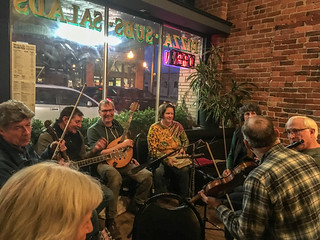