This weekend is our monthly outing with Lowcountry Unfiltered. Since our river was down below Savannah, I decided to head down on Friday and do some exploration ahead of time.

My plan was to leave as early as possible, check out the Savannah waterfront and some of the old homes, then check out Bonaventure Cemetery. In the evening I planned to have dinner at the Crab Shack on Tybee Island.

Unfortunately, traffic didn’t cooperate. It was Friday before Easter week, so it seemed like everyone was heading south. I didn’t get down to Savannah until afternoon. The city was a zoo, and I’d had enough traffic, no matter how historic and scenic. I decided to drive on out to Tybee, since I hadn’t been there in a long time.

I hadn’t been out to Tybee in a long time. Last time I was close was back when our group paddled out to Cockspur Lighthouse. This time I drove on past and out onto the island.

I found another zoo. All I wanted was a view of the ocean, but I couldn’t find a parking spot. Spring Break had indeed begun. The little beach town was hopping. I made one pass through, then headed back to the north end of the island, hoping to find the lighthouse.

I did find it, along with the Tybee Island Museum. There was yet another crowd, and it looked like they were setting up tents for a festival of some kind. I was going to climb the lighthouse, but the $9 fee gave me pause. As a working person I wouldn’t have thought twice, but as a fixed-income retiree, I weighed whether or not I’d have time to do the museum, too, and justify the cost. I decided I didn’t really have time for it, so had to content myself with photos from below. 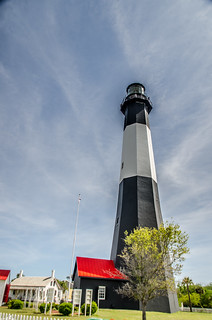 The afternoon was getting away very quickly, so I headed off the island and back to the mainland. As I was leaving I spotted a lawn ornament I’d really like to have. I don’t think Laura would agree, though. 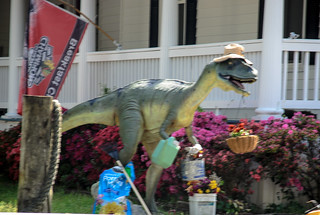 I made my way over to Bonaventure Cemetery. It had been a very long time since I’d been here. I hadn’t even looked up any maps or other information about the cemetery. I knew it figured prominently in “Midnight in the Garden of Good and Evil,” but I also knew most of that was fictionalized. Jim Williams was NOT buried in Bonaventure, but at his home church in Gordon, Ga. The “Bird Girl” statue has been removed, and is now in Telfair Museum of Art. I also knew that Johnny Mercer’s grave IS in Bonaventure. That was the extent of my knowledge.

I drove through, admiring the artwork. 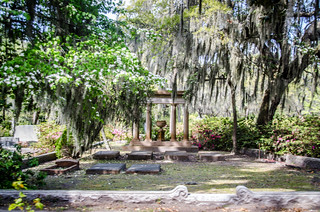 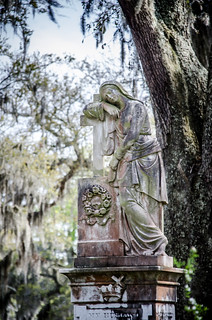 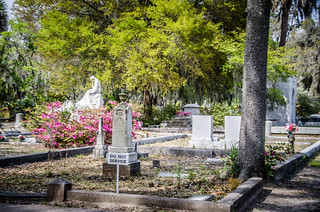 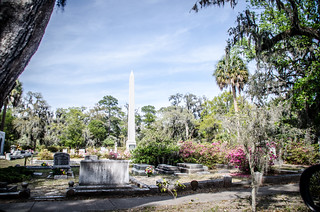 I spotted signs for the Mercer section of the cemetery, but kept driving looking for a place to park. I soon reached the water’s edge, where I did find a place, then walked back. There were a couple of tour groups so I just tagged along until I found the Mercer section. 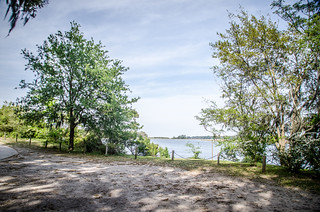 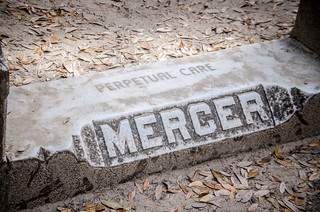 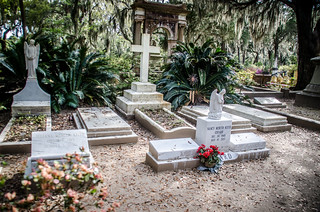 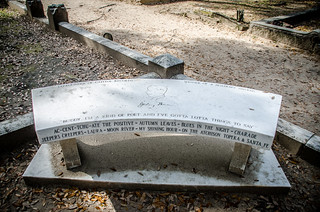 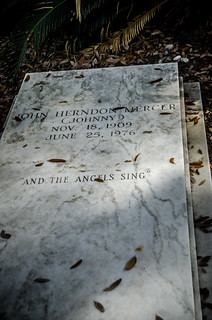 The amount of artwork in the cemetery is staggering. I didn’t bother looking for signature stones. There were tons of angels, and all I could think about was Doctor Who. I did head back to the car and drove through the area, though. Good thing – I encountered a worker in a truck that said they were closing in about 15 minutes. It was time to go. 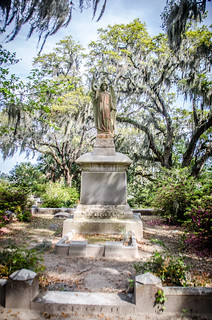 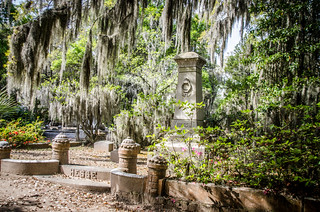 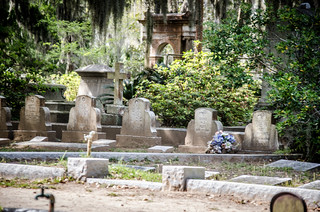 By the time I stopped for gas and made my way through traffic back towards Tybee, it was close enough to dinner time for me. At about 5:45 I pulled into the parking lot for the Crab Shack to find it already jam-packed. I found a parking spot, and headed on up, wondering if I’d be able to find a seat. 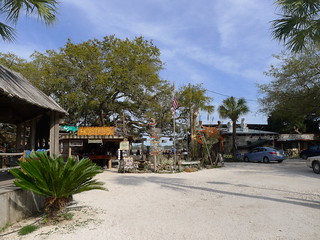 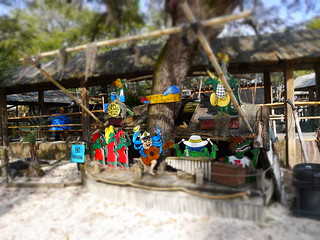 Turns out it wasn’t a problem. Since I was alone, I decided to sit at the bar…and was promptly ignored. After about 10 minutes of my presence not even being acknowledge, despite attempts otherwise, I walked back to the hostess station and said, “This isn’t quite working out.” They apologized and seated me at a table…less than four feet from the bar where I had been. At least I did get someone’s attention.

The thing to order here is the Sampler Platter. It’s a huge amount of food, but gives you a good taste of just about everything they have. The food did not disappoint this time, either. 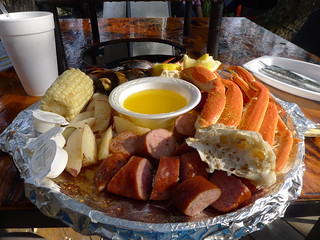 What did disappoint was the service (or lack thereof) and the number of biting bugs. I was absolutely miserable by the end of the meal, and ready to go.

I think the Crab Shack is best experienced with others. Single diners tend to get lost in the shuffle. Plus, there is the camaraderie of the experience. I won’t be back by myself.

So, disappointing photo shoots and a somewhat disappointing meal. My disappointments were not through for the evening, though. I drove to what I THOUGHT was my motel, only to find that they didn’t have a reservation for me. Turns out I was in the wrong place. My motel was actually 15 miles further down the interstate, and actually much, much closer to our paddling venue. I all’s well that ends well. I was hoping that the paddling trip the next day would be better.

As usual, here are the rest of the photos from this set that I didn’t include in the post…