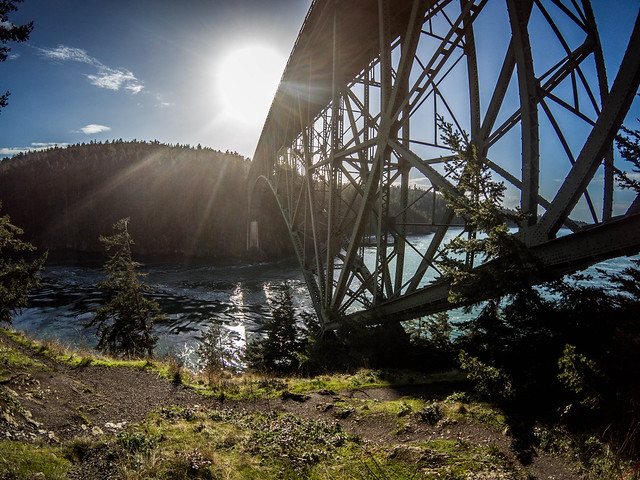 It seems like it’s been raining ever since we got back from South Carolina. There may be an occasional break, but for the most part it’s been gray, dark, and downright gloomy. On this particular Tuesday rain and clouds were still in the weather, but for some reason the sun decided it needed to break through. Laura declared that we were both suffering from cabin fever and kicked me out of the house with my camera while she did some Furman work. I wasn’t sure where I was going when I set out, but I wound up at Deception Pass.

Linda McDaniel called it a “Pineapple Express” – a warm flow of air from Hawaii laden with moisture, and having nothing to do with the 2008 movie with Seth Rogan. Temperatures were in the mid 40’s to mid 50’s, without much variation from day to night, and the winds were howling. There were white caps whipping up on the bay just below the house. It wasn’t the best time to be outside.

I did manage to get up on our roof when the rain and wind let up a bit to replace a vent cap that had blown off. Other than that, we stayed inside. We soon tired of going through closets and cleaning out stuff in the house, but that’s when we discovered that there were no games or other distractions. We found Monopoly and chess, but there wasn’t even a deck of cards. That sent us out into the rain and into town to find some games – Jenga, Scrabble, and UpWords.

By Tuesday, though, it was too much, so I headed out. It was one of those meandering rambles that took me first through Bayview then onto Highway 20. At the big bridge over the Swinomish Channel I diverted. I took an exit that led to a boat ramp under the bridge. I wanted to check it out as a potential launch site for kayaking.

The current was ripping through the channel a bit quicker than I might have liked. It would work, but I’d also have to contend with heavy boat traffic. I decided there were better places to launch. I still explored the area a bit. On the other side of the bridge I drove into the Swinomish Casino parking lot to look at the rotating steel railroad trestle. Every time I’ve seen it it’s been in the open position, but I know that trains use this track to carry products to and from the refinery. I’d love to see it in motion sometime. 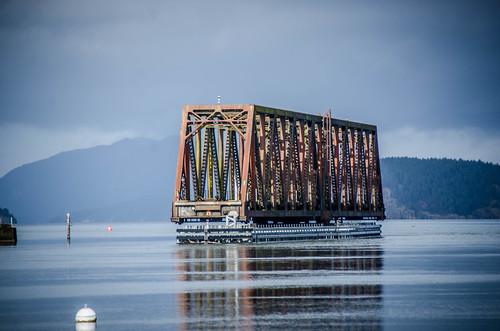 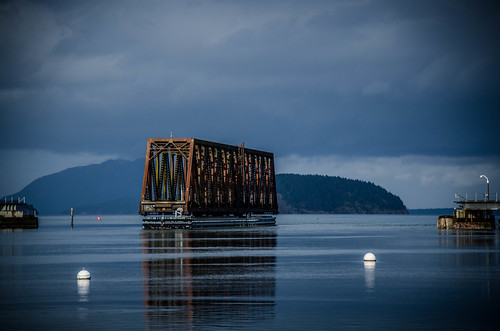 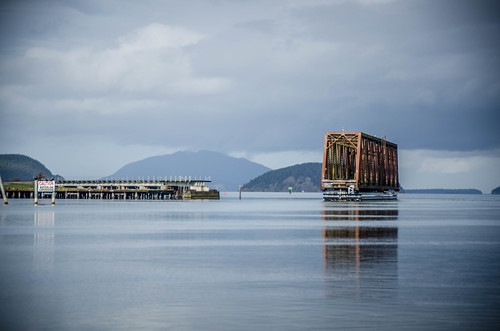 I had visited one bridge, so on a whim I decided to check out another – Deception Pass. I had driven over the bridge several times but we hadn’t stopped since we got here in September. It was either too crowded, the weather wasn’t right, or we were in a hurry to get somewhere else. This time I decided to stop.

There actually two arched bridges across the pass. One crosses Canoe Pass, a narrower channel, and the other runs from an island midway in the channel across the main channel. Both are dramatic with views east and west. I parked just north of the Canoe Pass bridge and began walking along the bridge on the east side. 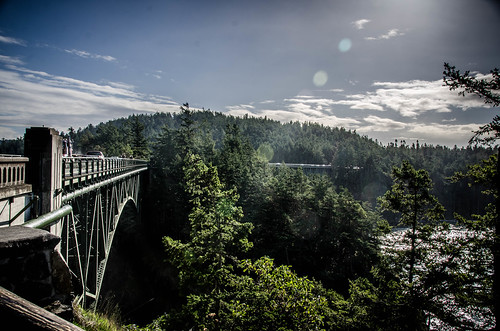 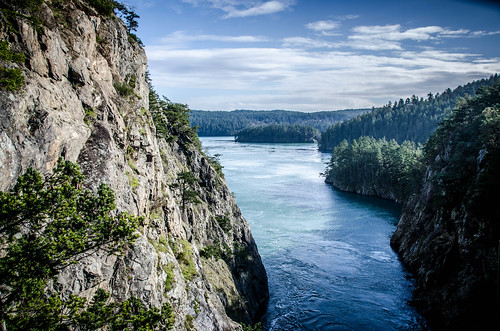 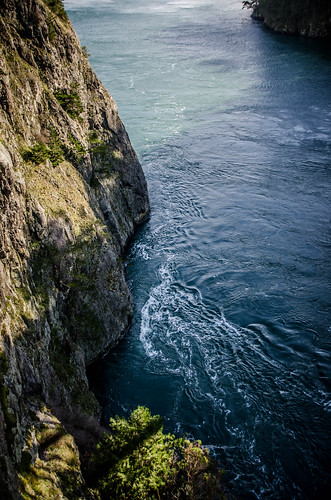 The incoming tide was ripping through the channel. I’ve seen boats struggle against the current and know some kayakers who have braved the flow. However, today there were none out in the water.

I crossed the first bridge to the center island. A stairway leads down and under the bridge so that pedestrians don’t have to cross the busy road. This route also provides some fantastic views of the bridge and the main channel. 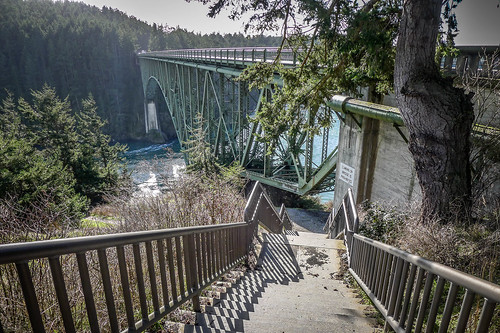 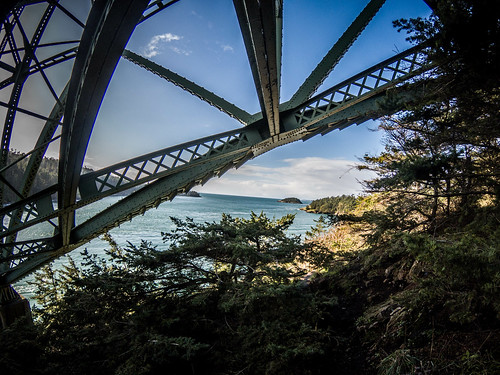 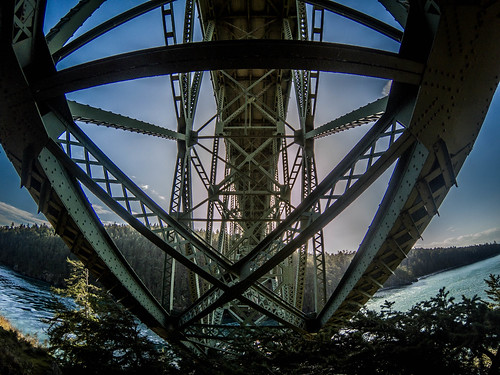 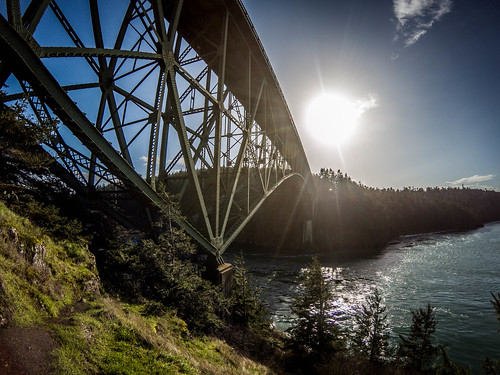 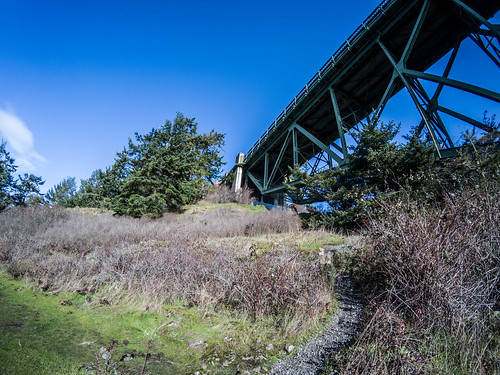 Back up at road level I walked on back to the car along the first bridge. I didn’t walk all the way across this time, but just to the mid-level. 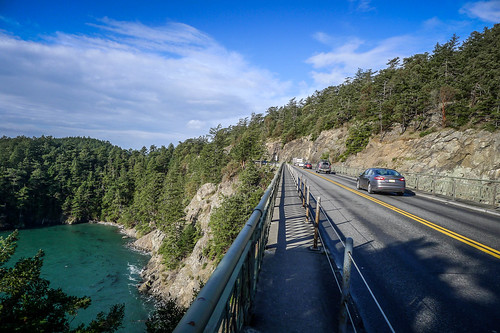 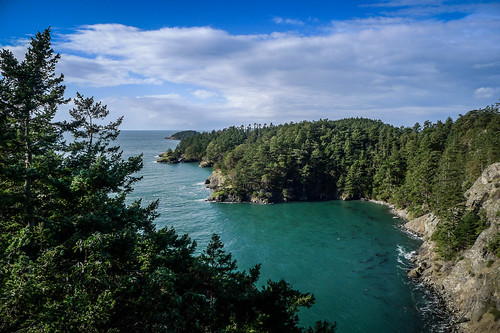 Back at the car I did drive across the bridge onto Whidby Island, then turned around and came back. It was just past the lunch hour and I wanted to find something interesting. On Highway 20 a few miles from the pass I found the Shrimp Shack. This is one of those odd little local places that give a region character. I was hoping that it also had good food. 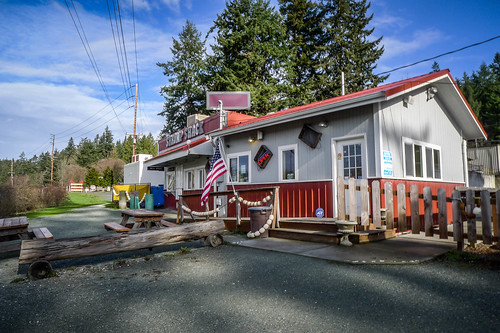 There is a place to order from an outside window and there is outside seating. However, today there was only indoor service. Most of the tables in the small cafe were taken, but I found a place in the corner. 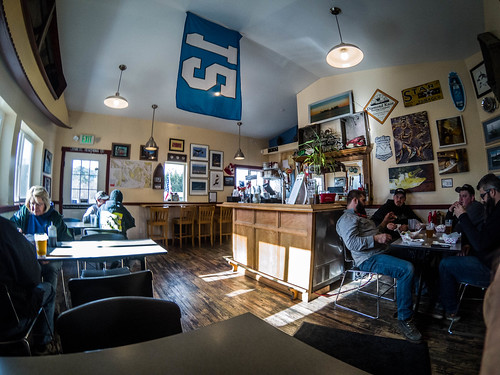 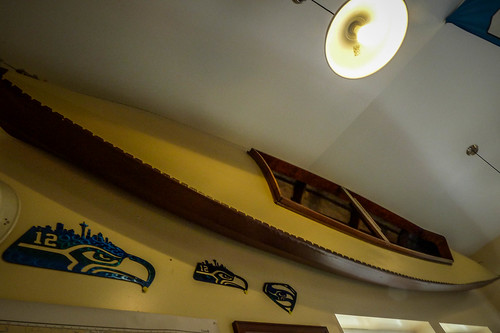 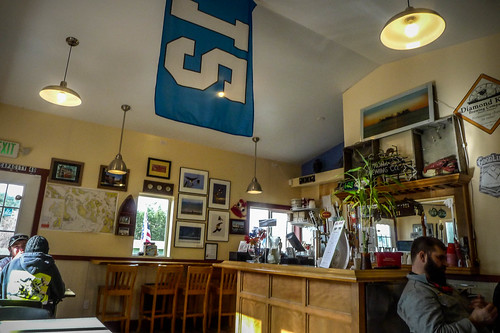 As the name implies, the specialty here is seafood. I ordered an oyster burger with at least six large fried oysters layered on a bun. It came with tartar sauce and cheese, but I added a copious amount of Tabasco to make it perfect. 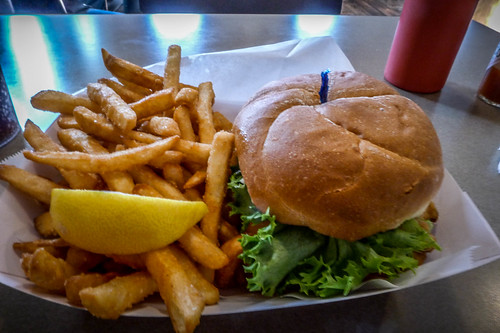 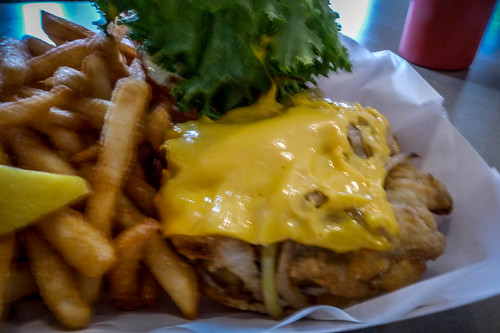 I made my way on back to the house. The clouds rolled back in, but the setting sun peeked through just in time to cast a rainbow through the returning rain. 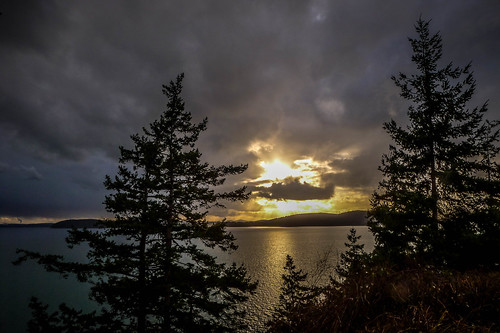 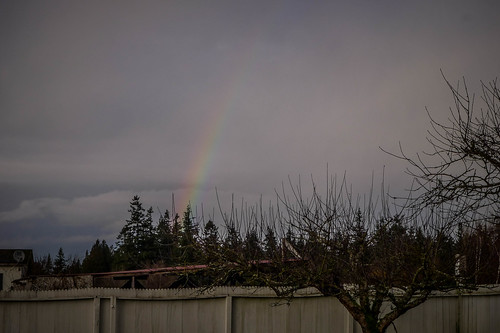 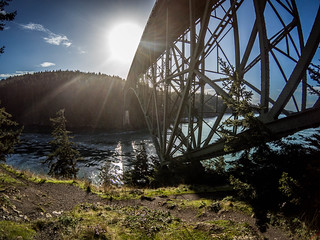