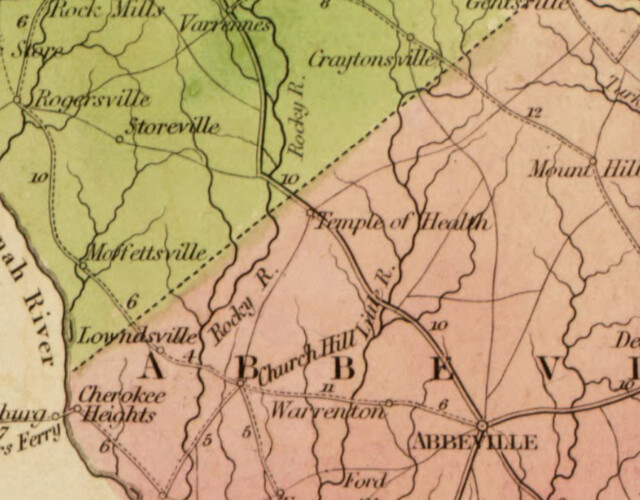 Sometimes it doesn’t take much to send me down a rabbit-hole of research. In this case it was a name on a map. I was looking at an 1839 atlas of the United States on the Library of Congress website when I spotted an unusual name in Abbeville – the Temple of Health. It was listed as a place name. When I checked the 1825 Robert Mills Atlas for Abbeville District, the name was there, too. I was intrigued. Why would this spot in the backwoods of South Carolina come to be known as the “Temple of Health?” 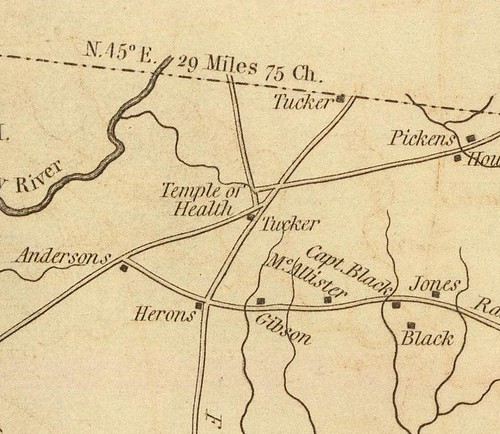 Before diving down the rabbit hole I have to set some parameters.  Otherwise I start off on a tangent and get lost.  That almost happened a couple of times here.   Usually that involves figuring out  what questions need to be answered.

My questions were a bit less general than the Ultimate Question of Life, The Universe, and Everything, but I still kept them fairly broad.  Here’s my list:

As it turns out, I’m not the first to ask these same questions.  As I did my research I found a wave of interest in the Temple of Health in the early 1900s.  I was able to piggyback off of their work, but I also found lots more.

How widespread was use of the term “Temple of Health” as a place name and to what did it apply? 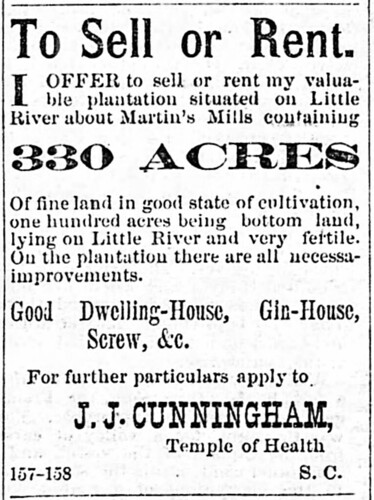 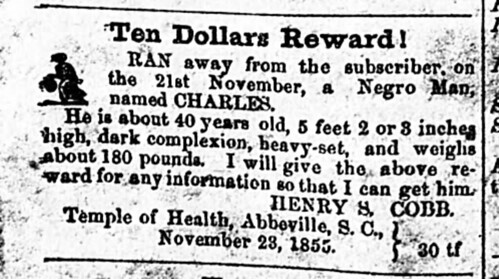 In addition to the wool carding operation seen in the above articles, there was at least one general store. 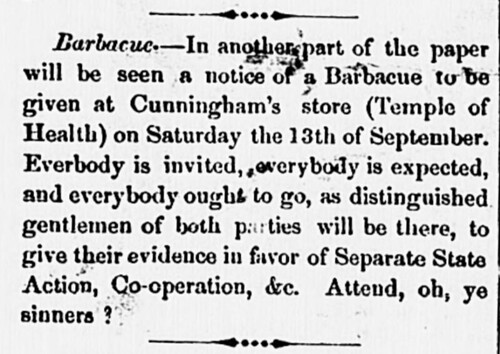 From some articles I’ve read, Temple of Health is generally associated with the town of Antreville, but the two are not an exact match.  The Carolana website shows that there was a post office by that name from 1823 until 1877. However, both Antreville and Temple of Health existed simultaneously from 1852 until 1878. 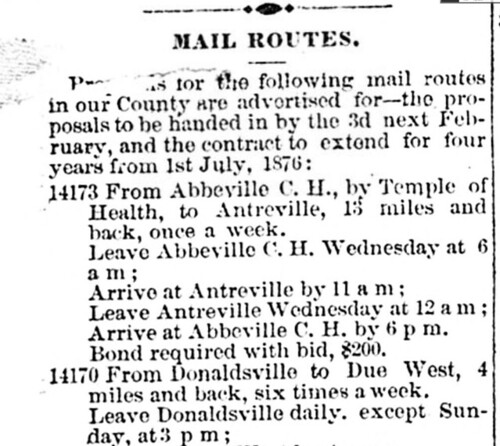 So, Temple of Health was a town or at least a community with a post office in the general vicinity of Antreville. I need to know if there was more to the name, and to do that I needed to answer the second question on my list.

What was the origin of the name, as regards this location?

Several genealogy resources helped me pin down this question, as well as the next on e on my list, “Who owned the property and chose that particular name?”. The name figures prominently in the history of the Wakefield family. One genealogy blog refers to it as “Wakefield’s Temple of Health.”

Near the Abbeville-Anderson County Line is a home that was once known as the Temple of Health. In the South Fork of the Waken – Fields: A History of the Southern Families of Wakefields who descended from Thomas Wakefield who came to America in 1635 by Wayne E. Wakefield there is a reference to an article by Louise G. Ervin that appeared in South Carolina’s historical magazine “The Sand Piper” [sic] in September, 1970. The house was owned by the Wakefields in the 1800s and possibly in the late 1700s as well. If the Wakefields owned the house in the late 1700s I believe it probably would have been the home of Abel Wakefield and Mary Anne Bronson as Abel and Mary were the grandparents of Conrad Wakefield who was supposed to have sold the house to Frank Clinkscales in the late 1800s.

“The Sand Piper” mentioned above is actually the Sandlapper Magazine, and I did eventually see the 1970 article, but that’s getting ahead of things.

I also found references to the Brownlee Family in connection with Temple of Health. One genealogy site had these notes about John A. Brownlee:

Identified as John A. Brownlee. He is listed as a farmer in the 1860 Census. His home was called the Temple of Health and located at Brownlee Crossroads near the present town of Lowndesville. John also designed the slave balcony at Shiloh Methodist Church near Antreville, SC in 1858 and was a founding member of that congregation. The house burned in 1925.

More confusion. Brownlee Crossroads is a couple of miles south of Antreville, and not really near my target location. This note also says that the house burned. I suspect that the “Temple of Health” mentioned in the Brownlee notes are for the community rather than the actual house.

I was getting quite a few hits on the phrase “Temple of Health” that had nothing to do with the location in Abbeville County. A Dekalb County newspaper called The Champion seemed like an unlikely source for information about an Abbeville location, but turns out it provided one of the best clues yet about Wakefield’s mysterious house.

The Stage Coach Inn, built in 1775 in Antreville, S.C., was originally called The Temple of Health and was situated on what was believed to be a healing waters spring by the Cherokee Indians who inhabited the area prior to European settlement.

The Dekalb article was about a resort near Toccoa, Georgia called Trembly Bald. Part of its attraction is that it has moved historic cabins and buildings to the property, and visitors can now stay in the restored buildings. Trembly Bald was another one of those hits I had dismissed as not relevant. I went back to that link to find that the original Wakefield House, aka Stage Coach Inn, aka Temple of Health was still extant, albeit in a new location, having been moved from “Antyville”, as Trembly Bald put it. I added it to my list of places I needed to visit.

So, the brief answer to the second and third questions are that it started as an inn on a stage coach route, and it was renamed for a set of mineral springs on the property that had medicinal properties. The Wakefield family was owned the property in the late 1700s, but it’s unclear who actually built the inn or who changed its name.

I came across several references to postal routes that passed through Temple of Health. However, after the 1870s the name Temple of Health seemed to fall out of favor, and Antreville became the dominant locale and name for the community. Temple of Health fell into obscurity, so much so that in the early 1900s there was a rediscovery and surge of interest in the old location that followed a path similar to mine.

In 1926 an editor of the Greenwood Index-Journal came across an old map similar to the one I found. Some of the old place names triggered curiosity. 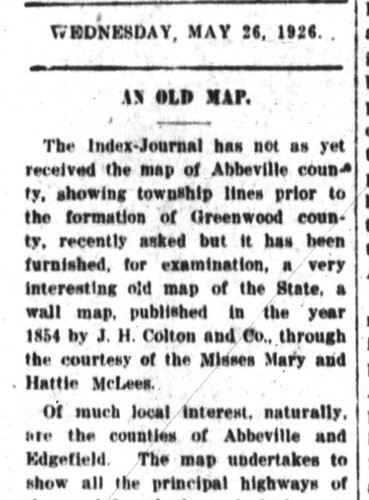 The editors put out requests for information about some of these old locations. It had this to say about Temple of Health: 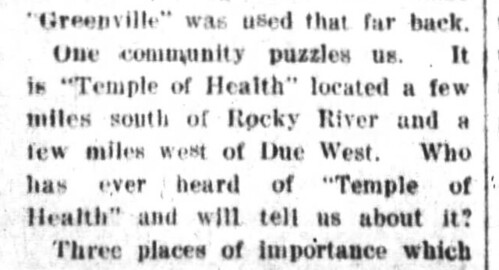 One community puzzles us. It is “Temple of Health located several miles south of Rocky River and a few miles west of Due West. Who has ever heard of “Temple of Health” and can tell us about it?”

Over the next few months several wrote in with responses the Index-Journal’s inquiry. Most remember the phrase as the name of the post office, and did not remember the old stage coach inn. 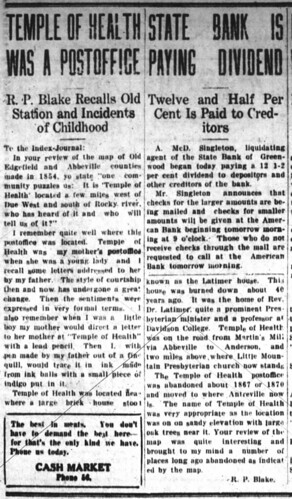 Many of these remembrances conflate the post office with the inn. It’s possible that the inn served as the post office, but most of these articles describe a brick house, rather than a cabin, so I’m not sure about that. In the 1940s there was a proposal to turn a building referred to as the “Temple of Health” into a museum. Again, it’s unclear if this is the post office or the actual inn. 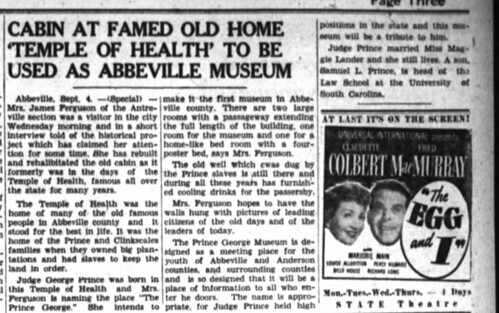 I had answered the questions…mostly, but I still had quite a few gaps. I also had that last question – Are there any remnants of the Temple of Health?. That would require a bit a ground-truthing, which means another blog post.

But finally, it is worth mentioning that I came across several other references to “Temple of Health.” Perhaps the most notorious was the Temple of Health established by “Dr.” James Graham in London in 1775. After a brief stint in Philadelphia, Graham became convinced that Benjamin Franklin’s theories of electricity were the cure for all ills. Graham fancied himself a “sexologist” and created the “Celestial Bed” in his Temple of Health. Supposedly lovers on this bed would be “blessed with progeny.” The bed was hooked up to electricity somehow, and supposedly crackled during the night.

Dr. John Harvey Kellogg (yep, THAT Kellogg) was a Seventh Day Adventist from Battle Creek, Michigan who was an advocate for healthy diet and life choices. Kellogg invented Corn Flakes in 1878, and his brother, William, went on to found Kellogg Cereals. J. H. Kellogg also founded the Battle Creek Sanitarium, which was also referred to as the “Temple of Health.” Interestingly, one of Kellogg’s patients at his sanitarium, a Mr. C. W. Post, would go on to found Post Cereals. 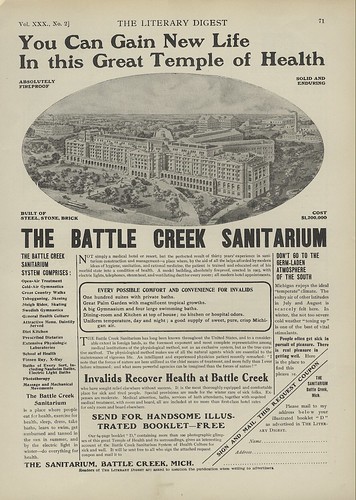 The phrase was used by many other medical quacks during the 19th century, so it was often hard to filter these from my main research. There were also a few references to other temples of health in South Carolina. Most of these were for pharmacies. 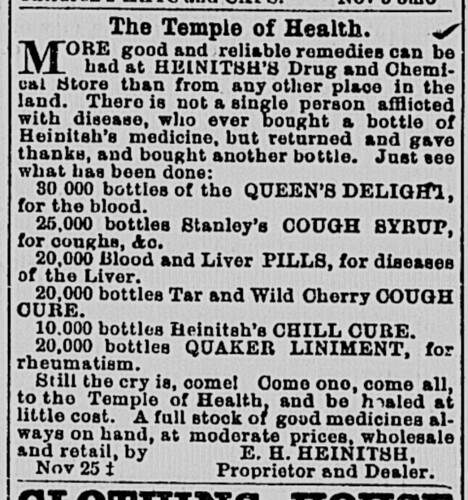 At this point I had all of the background info I (thought) I needed. It was time to go see what I could find. 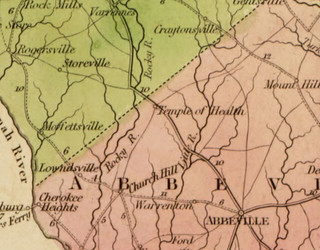 4 thoughts on “The Temple of Health”